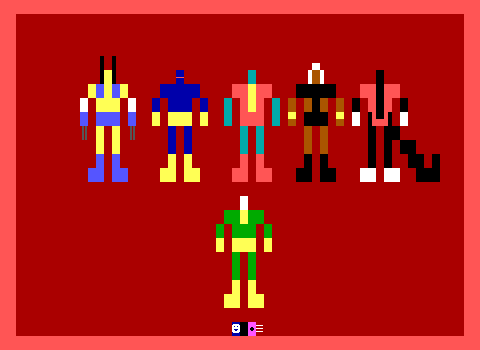 Four X-Men fan games of varying quality. The first two are not connected despite the names.

The first game stars Cyclops on a quest to rescue captured X-Men from the evil mutant Capornicas, taking through player through yellow bordered representations of pool halls, anti-mutant protests in the park, and a bank. Just some basic shooting in rooms that have a lot of empty space. While it's not particularly memorable, it does play just fine. The one surprise it does have is that you can opt to head back after rescuing just some of the X-Men, where you'll be chastised for abandoning them in their time of need and cast out by professor Xavier.

The second game is the reason for the stream, as the game's author recently showed up, so he was there in chat to explain things. It's still pretty straightforward action, but the presentation is definitely nicer. The game opens with some cool looking art made almost entirely out of solid walls. Master Mold is attacking humans with sentinels and it's up to you to stop him. In this case, the player is asked which of several X-Men they'd like to play as, and certain objects appear on each board to allow you to use their mutant powers. I played as Storm and would sometimes have access to a lightning attack that instantly defeated all enemies. For Wolverine, the same object would give health as a form of regenerative healing. It's a neat idea that gives the game some extra replay value to see how each mutant behaves, even if the encounters and story remain identical.

Some good depictions of holes in buildings and rubble which Juggernaut likes to walk through as well as a bit of environmental detail such as background sentinel objects moving across assembly lines. Cool stuff and the author has since gone back and sent in a few other ZZT worlds of theirs they had held on to!

The next two games are both by the same author and part of a set. In version white, Cyclops has to rescue some X-Men from Magneto. This is another yellow bordered game with a few passage errors that make it impossible to complete normally. Otherwise, it's emblematic of ZZT games made by beginners. Yellow borders even when the playable area is a smaller region of the entire board, large fields of items, and the coup de grace of not understanding how ":touch" works, leading to every object spitting out its dialog as soon as you enter the board. Eventually the author seems to realize this is an issue and switches to using scrolls for dialog, but there's not much here to enjoy other than seeing the names of familiar (well, to X-Men fans, I'm oblivious to any that weren't in the opening theme of the 90s cartoon series) mutants.

The sequel, "Episode Yellow" stars Wolverine now on his own rescue mission to save Jean Grey and Wolfsbane from Pyro. While the game does improve the presentation a little with players exploring a small island before reaching the base where the pair was taken to, it's really more of the same. It's just as buggy, and even features a room where normal walls were used instead of fakes resulting in a soft-lock as you enter the board via a passage and have the game paused.

That being said, it does have one interesting puzzle idea that didn't quite work with a series of passages letting players push boulders out of the way of some pushers in such a way that they can get around a long chain of them. There's some ambition there at least!

Despite the flaws of these games, they were breezy enough that it was fun to run through them all. Ed's fears of his old ZZT game being miserable were the least founded though, with his game definitely being the most ambitious, well executed, and unique game of the set, the only one that tries to make the player feel like they're playing as a specific character and not your usual ZZT smiley face shooting bullets.