The first ZZTer comic series, created by Nomad in 1999. This was a short lived series written specifically to be posted on the ZZT Archives of the time. Two characters, one who never is named, and the other "Vortek", are ZZTers who spend too much time playing ZZT and being on the computer in general.

The second series of ZZT comics, "Yellow Boarders" created by Kaddar not long after Nomad's comics The strips focus primarily on ZZTer woes like the management of 24 Hours of ZZT contests, and over-hyping ZZT games still early in development.

A short collection of comics included with Eurakarte's Mr. Shapiro series of games. It is very reminiscent of Pokey the Penguin.

The Prophesies of Revvy

Revvy's own foray into ZZT comics with a grim tale of the past, present, and future of ZZT. 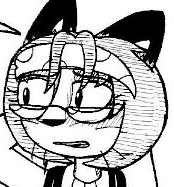 A short lived webcomic by Zenith Nadir based on his own ZZT hit: "Frost 1; Power". The comic covers the events in the first half of the game. Ran from 2008-2009.