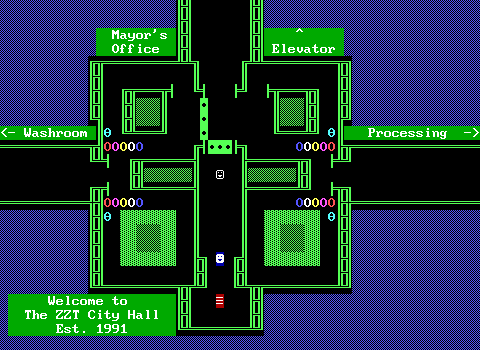 Touring one of the classics, 32 years later

Celebrating ZZT's 32nd birthday with a playthrough of one of the original four worlds (well, Town excluded as it won last year) as voted for on Twitter.

City of ZZT remains a lot of fun! I tried to shake things up from my usual order of heading west first to grab a big pile of ammo, but City is generous enough that after the Rat Race board to the east it hardly made a difference.

City is unique for being significantly more object heavy than the other three worlds, as it's the last in the series and likely the last to be developed. City has a robot, a toilet, health you can buy (but shouldn't), and far more NPCs than the other games. Fan favorite Dr. Bob makes his initial appearance here in the city.

It's a very gray city too! Despite what the mayor may say, a significant part of the city consists of its large prison. A homeless person in the park must be shot to progress and the mayor needs a bribe as well. Sweeney's portrait of urban life, even gamified here puts cities in a bad light. Your goal is to escape after all. Yet because City is the least abstract of all the worlds, it ends up being memorable for its portrayal of a city at all in comparison to Town which consists of boards littered with sliders, and forests to traverse to reach the local jazz hole.

City stands out from the other original worlds for its use of flags for important items as well. This is the only world in the original saga to not require collecting several purple keys to escape. Sweeney still recognizes that purple keys are an early part of ZZT's inconography though, and upon having everything needed to complete the game, the player does get one purple key to promptly open one last purple door, bringing the series that started it all to its conclusion.