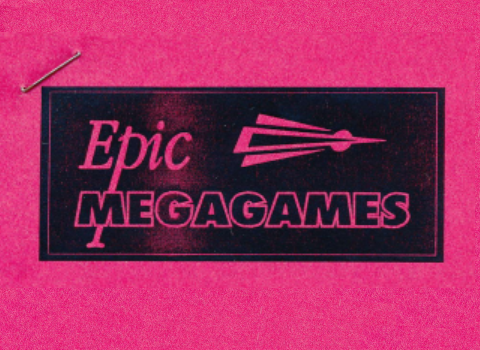 In 2018 after playing through Beth Daggert's Ezanya for a Closer Look, I tried my luck at getting in contact with her as she still had a page for the game. I managed to reach her and discuss the creation of Ezanya as well as what ZZT was like in 1991, an era that has very little in the way of documents or even ZZT worlds as part of a historical record. In that interview she mentioned still having an assortment of old papers and correspondence between her and Tim Sweeney. Recognizing their importance, she planned to scan them and share them eventually.

Jump to late 2020 and sure enough, she did! She had preserved perhaps the only remaining copies of some of these files including ZZT newsletters, personal letters, and early internal Epic MegaGames newsletters. These scans were sent to me with permission to publish them and make them accessible on the Museum. In January 2021, I released the first of these documents, ones which were newsletters for ZZT that would have been sent out to numerous people to drum up interest in the Best of ZZT contest that would end with the creation of both the two-world Best of ZZT collection and six pack of worlds that make up ZZT's Revenge.

The second portion of documents are more private. It was decided that it wouldn't hurt to try and get Tim Sweeney's permission explicitly to release them especially seeing as how he had been rather generous with the Reconstruction of ZZT and its licensing. A thumbs up was given and documents are now freely available.

While plenty of these documents do pertain to ZZT and Super ZZT, plenty more go a bit beyond the scope of the Museum of ZZT. Although Epic is the company responsible for ZZT, the content they created afterwards isn't all that relevant to the ZZT community and its thousands of worlds created since. But I'm not an idiot and I know an important piece of history when I see it. So brace yourself for a bit of a crash course in the PC shareware industry circa 1991-1992!

As with the previous release of documents, this article will be covering notable bits within the documents via images of each relevant page. The full PDFs are available below and are likely of significant interest to those curious about Epic's history or early 90s PC gaming in general.

Again, not every page of these documents will appear below! For those who want the complete picture, please be sure to look at the PDFs as well!

With all that being said, it's time to present these fifteen scanned documents in a collection I'm calling the Epic Mega Haul.

*Not featured in this article 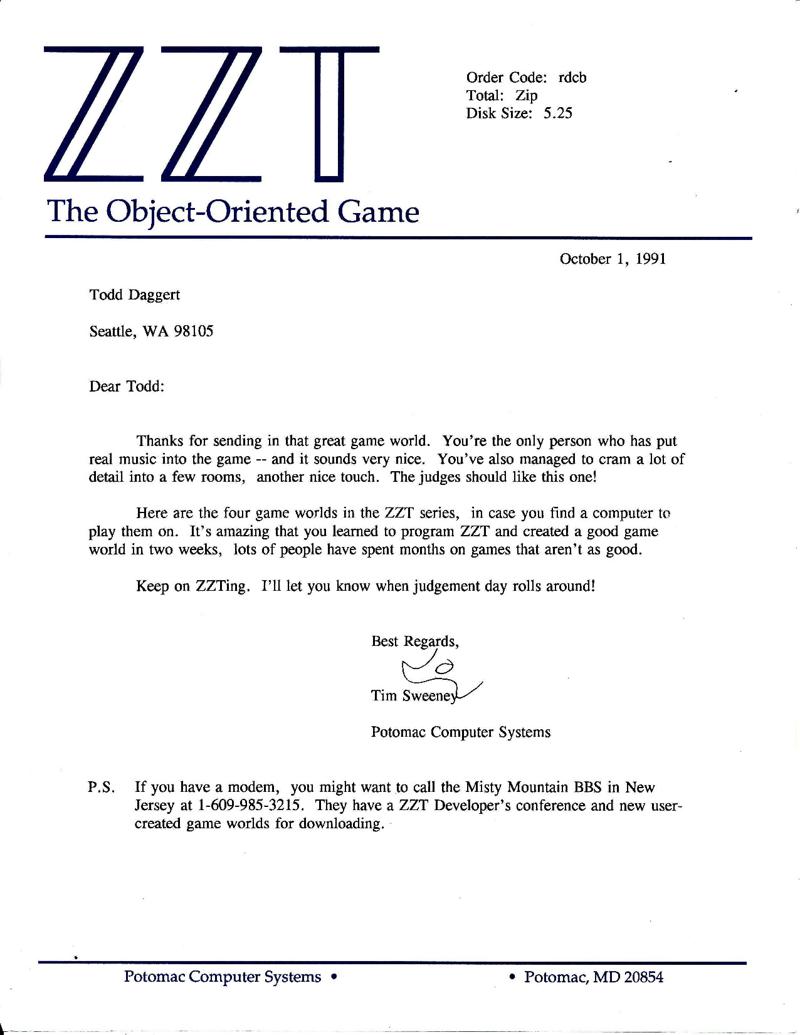 The first response to the submission of Ezanya comes in the form of a letter.

Immediately the game sounds like a solid contender to win. The letter appears to have been enclosed with a registered copy of ZZT (said disks are confirmed to be long gone). We also get to learn of the impressive two week development cycle for Ezanya. That's pretty good for the level of complexity Ezanya offers.

The letter mentions the Misty Mountain BBS which appears to be the most official place for ZZT in 1991, with users sharing their worlds, an online conference, and some early status as being the official Epic MegaGames distribution point. (At least for now...)

That 386-33 should really fly with a Super VGA monitor attached! 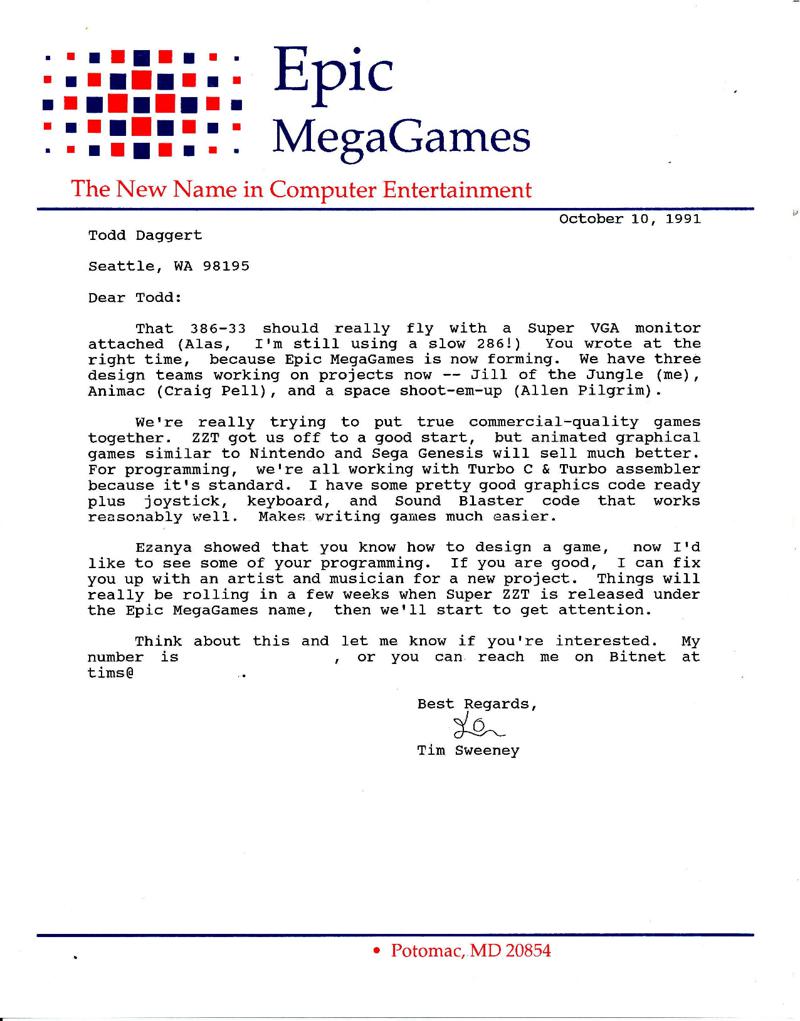 I'm trying to be all serious, but that first sentence is so powerful to read 30 years later.

More notably though, it reveals that ZZT was developed on a 286 system. That seems like a good reason for it to be a text-mode game.

But where the historical record really gets interesting, is with the list of upcoming games from Epic. Jill of the Jungle needs no introduction, it's the third release from Epic after ZZT and Super ZZT. Allen Pilgrim's unnamed shoot-em-up is undoubtedly Kiloblaster, but I hadn't heard of Animac before. Luckily, Craig still maintains a website with a copy of the game, a sort of exploration based shooter with CGA graphics and PC speaker audio. You can also play it in browser on archive.org.

Animac is the first of a few games Epic had lined up for publication that never got released through them. Pell's site states that game isn't actually finished, which sounds like a good enough reason for it to be missing from Epic's history!

Are you familiar with games on the new Nintendo and the Sega Genesis? 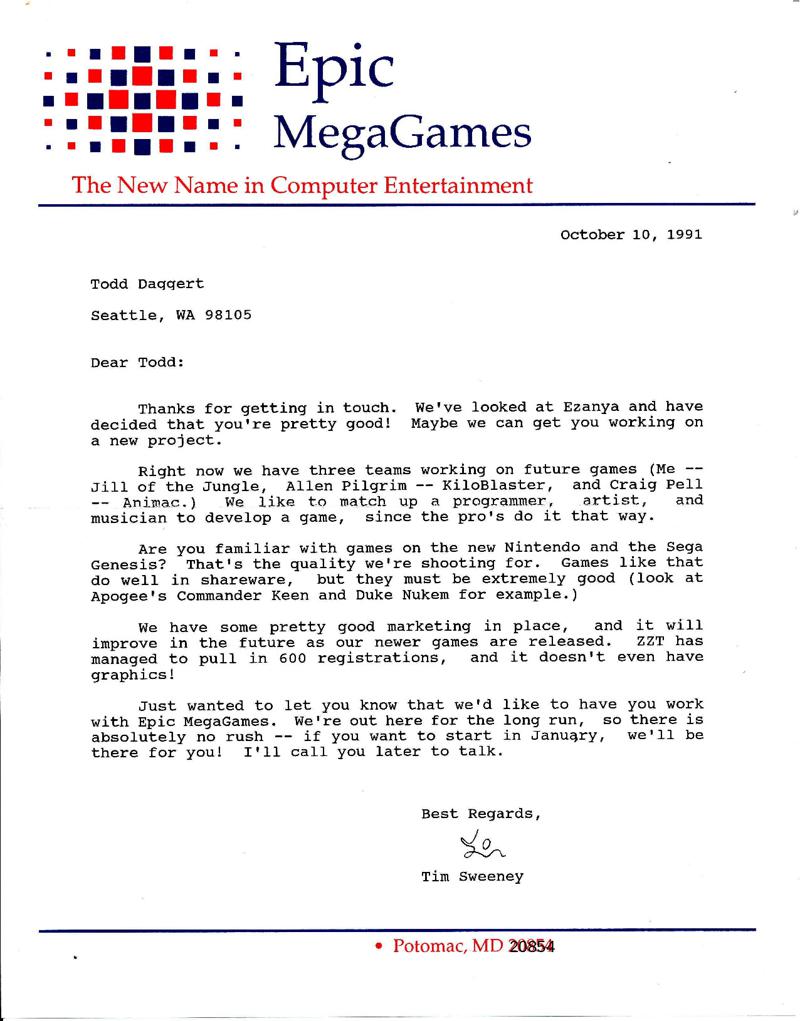 After successfully recruiting Allen Pilgrim through Fantasy and putting him to work on Super ZZT and Kiloblaster, a similar offer is extended here. Epic MegaGames is still very much in its infancy and gathering programmers to get into shareware making games that are both high quality and pushing the cutting edge in terms of graphics and sound. Some sales figures reveal 600 copies of ZZT being sold in nine months. 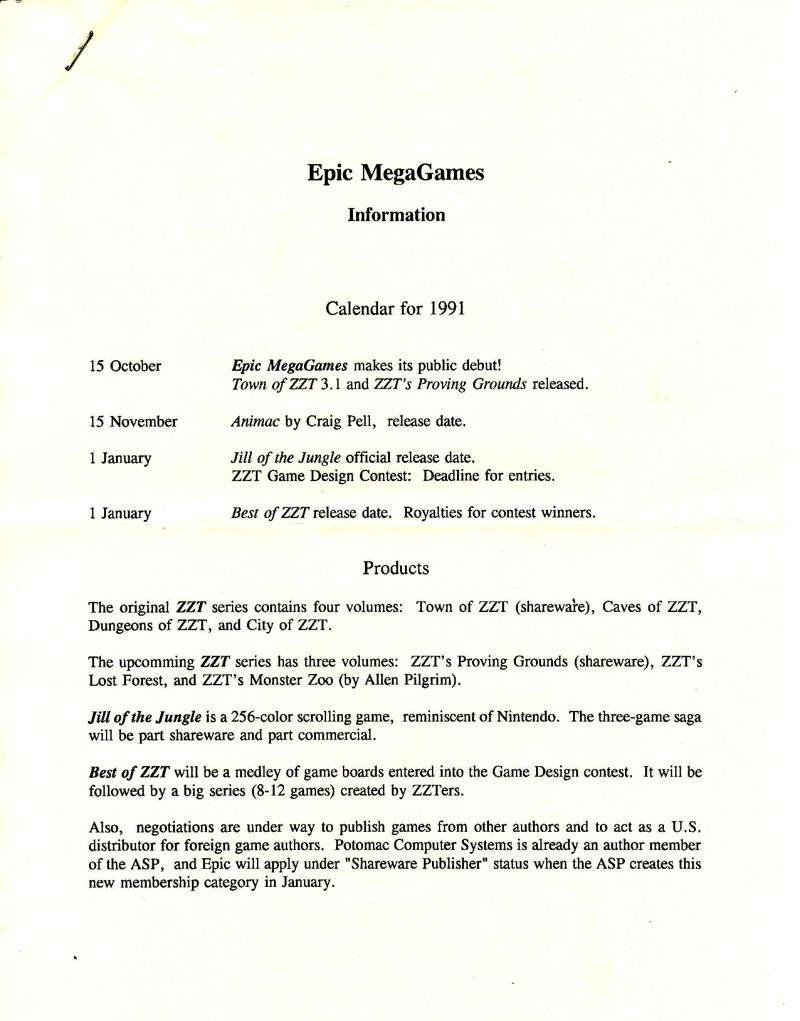 And lo, we have a very reasonable explanation for why Tim mistakenly said ZZT was released in October of 1991. October 15th, 1991 is a rather important date marking the official name change to "Epic MegaGames" from "Potomac Computer Systems", the release of ZZT version 3.1, and the release of Tim's last ZZT creation: Proving Grounds and Super ZZT.

There's a lot of interesting things about the dates here. Firstly, we have two copies of ZZT v3.1. One of which is from November 1991 and is branded as being made by "Epic MegaGames", but the other is a September release which barring inaccurate file dates (absolutely a possibility that shouldn't be discounted) means that 3.1 was available before the date provided here, and that particular version still carries the old "Potomac" branding.

There's a release date for Animac as well as one for Jill of the Jungle which like ZZT seems to have been lacking a definitive date (though in this case it's an expected release date compared to the ZZT newsletter that gave its release date in the past tense.) Though a later document will reveal that this release date for Jill was missed regardless.

And then past the dates are some information on Epic's products past and present at the time. Note that Proving Grounds is listed as the shareware episode of Super ZZT, when in fact it ended up being Allen Pilgrim's Monster Zoo instead! This might explain the oddly inconsistent numbering in Super ZZT where the splash screens label Proving Grounds as volume five, Lost Forest as volume six, and Monster Zoo as volume seven. Meanwhile the title screen on Monster Zoo gives us our "canon" ordering for ZZT and Super ZZT while the title screen for Lost Forest calls itself volume seven. Given the already unique marketing of giving away the last episode of Super ZZT away as the shareware title, I suspect the plans for numeric ordering, and which world should be the shareware one took some time to settle.

Finally, Best of ZZT's description mentions a follow-up of 8-12 games created by ZZTers. The ZZT's Revenge collection only contains six worlds. Were things cut due to time constraints and wanting to focus on non-ZZT games to grow Epic? It is a mystery indeed.

You won't be seeing any more ZZTs -- we've raised our standards 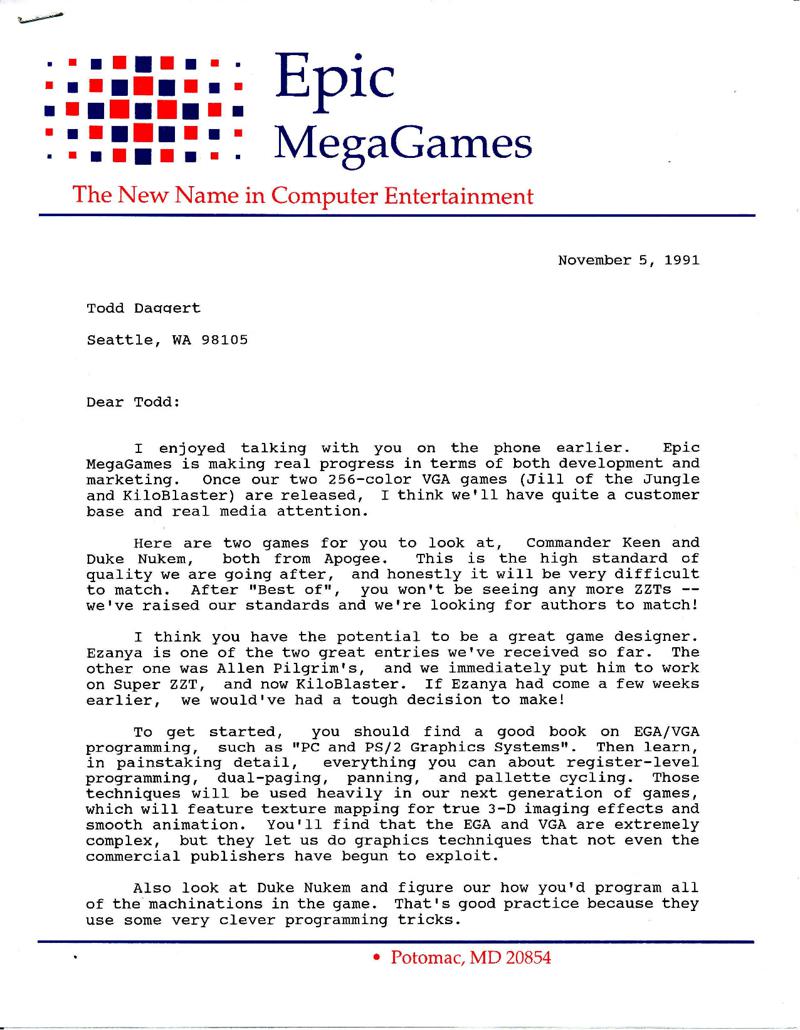 Moving into November, some homework is given to study Apogee titles and get a feel for how they were programmed. Back in 1991, Apogee is the company to beat in the shareware market for sure. Epic's shift to 256-color VGA games when other companies were sticking with 16-color EGA graphics for a wider support base helped the company live up to its name with flashier visuals than a lot of shareware was offering. Say what you will about graphics over substance, but there's no denying that the 90s were a decade of chasing better and better graphics. Of course, while Jill's colorful artwork could get eyes on the game, having the game be fun was also a priority. Commander Keen and Duke Nukem are specifically cited as a bar to meet, and it would take more than extra colors to bring in registrations.

Between ZZT and Super ZZT, we get 4 orders per day; but with a 256-color state-of-the-art product to work with, we could sell 20 per day. 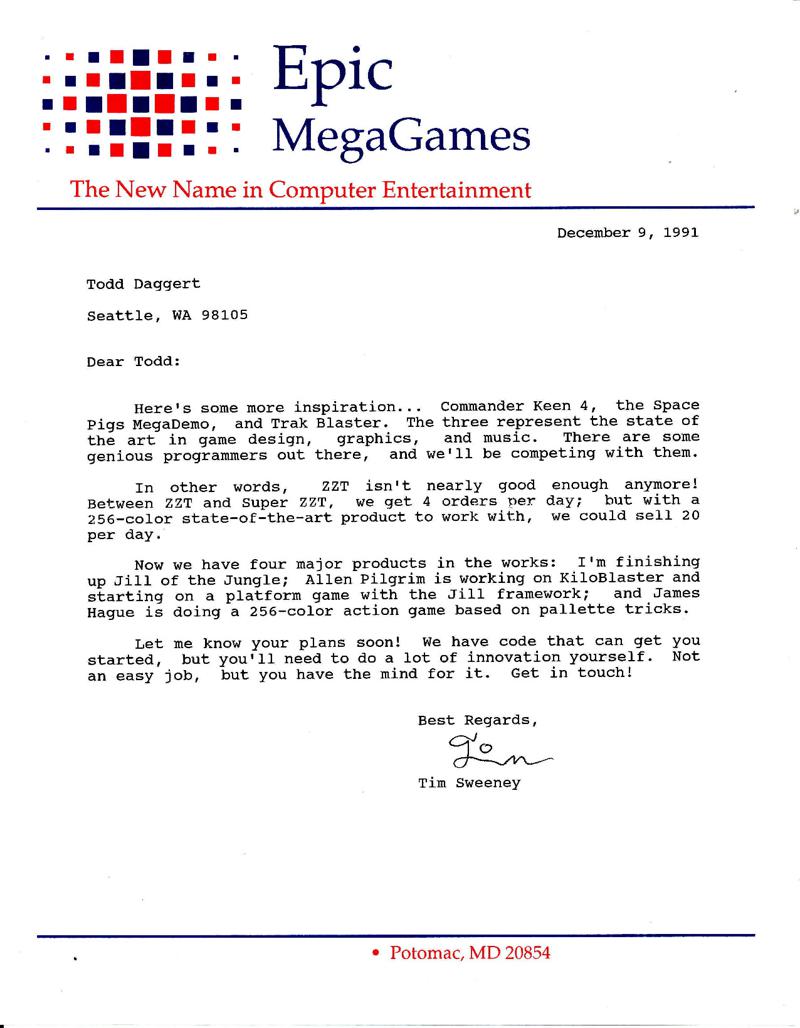 More numbers on how much the ZZT collections were selling! But more importantly some more sources of inspiration. Taking a departure from shareware games and suggesting looking at the PC demoscene with the Spacepigs MegaDemo and what seems to just be an MS-DOS mod player with Trakblaster?. Perhaps the thing to study there is the quality to file size ratio that made mod music a popular solution for audio at the time.

If you can incorporate good role-playing qualities with arcade action, you can have a sure-fire winner. 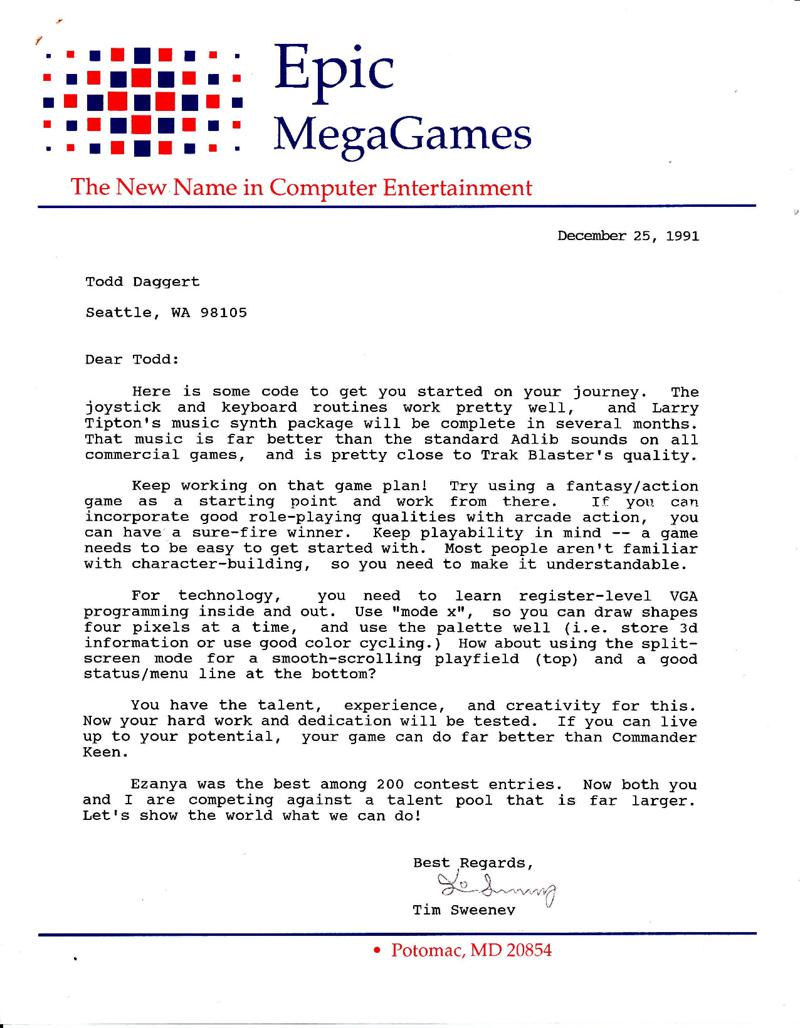 Merry Christmas! I got you some joystick and keyboard routines.

This next letter is a good reminder that what these documents represent isn't the whole picture. Letters are being sent both ways so we're only seeing Sweeney's responses, plus there are mentions of making phone calls as well. This letter reveals the plan to develop a fantasy RPG for Epic that will ultimately never come to fruition.

There's a strong focus on developing something visually impressive with good use of the palette and "mode x".

We should be able to make a game that matches Ultima in sophistication, but is actually bigger and better. 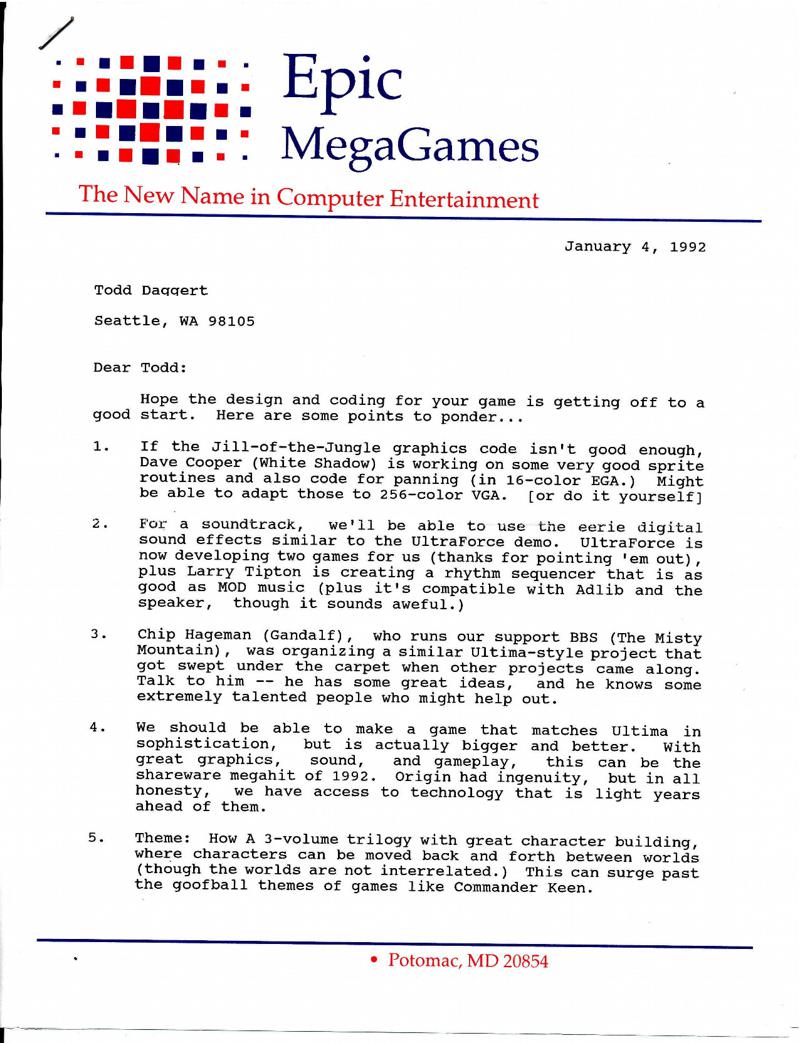 The letters start shifting in tone from "would you like to make a new game with us?" to actually planning to do so. Code is being shared from Jill of the Jungle and connections are being made with other developers working on some useful audio and visual code.

There's another PC demo referenced with Ultra Force, but it sounds like this time that rather than just being something to look at, the group themselves are interested in doing business with Epic. This one looks like it went somewhere as Ultra Force's website mentions member Arjan Brussee who worked on Jazz Jackrabbit!

This is definitely not a "Dungeon Janitor's Apprentice" type of game! 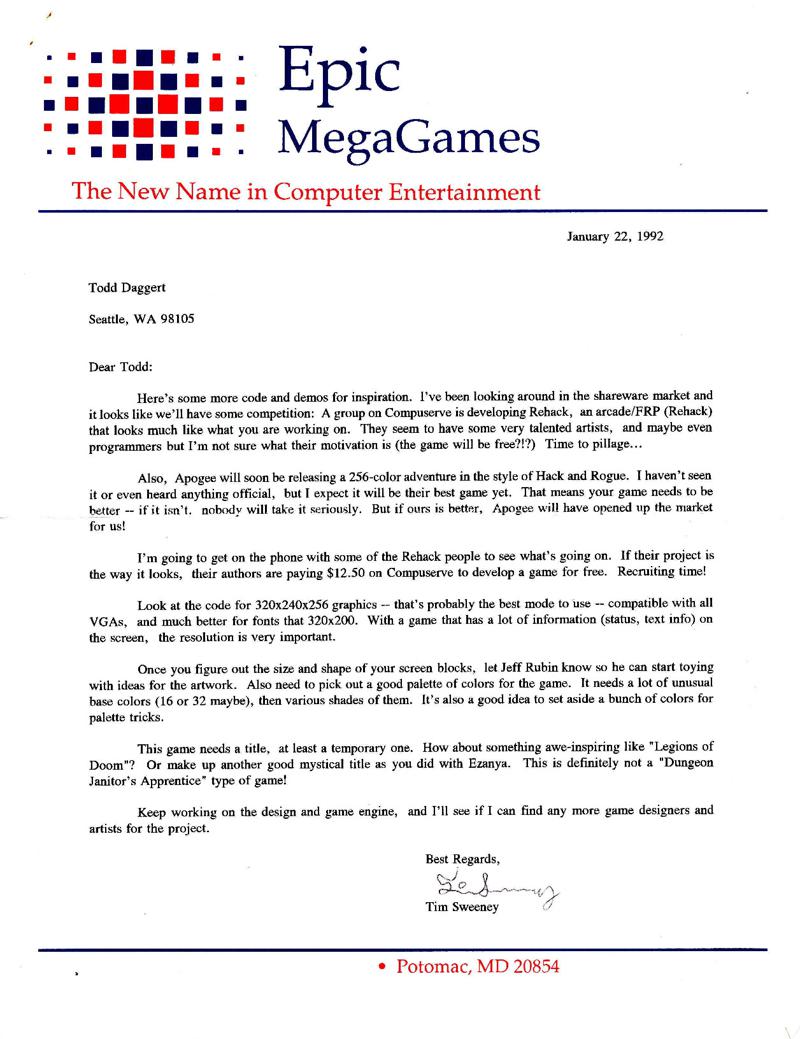 This "free" video game will never take off!

Well, in this case it doesn't look like it did. The only ReHack I can find is from 2018.

Meanwhile Apogee has their own fantasy game rumored to be coming out soon. The comparison of Hack and Rogue would make it seem like it's some kind of roguelike, but to my knowledge Apogee never released anything of the sort. That sort of fantasy theme never seemed like a big focus with them, and the only released in the ballpark of a fantasy roguelike to me would be Mystic Towers, which is the closest thing solely based on it not being a platformer.

The planned Epic fantasy game meanwhile needs to get some more concrete decisions made about resolution and tile size so that work can start on the graphics. It also needs some sort of title! Imagine releasing a game called Legions of Doom the same year that Doom is released. 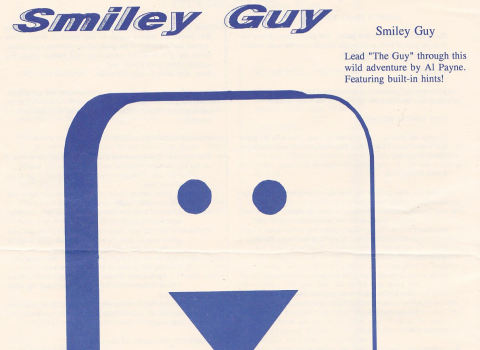 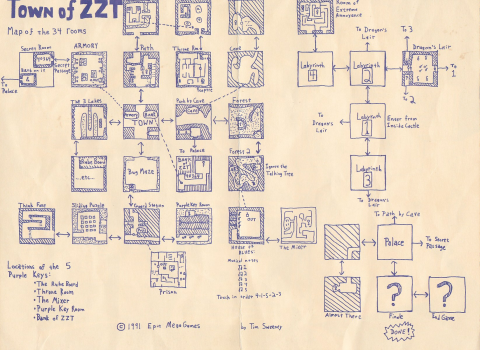 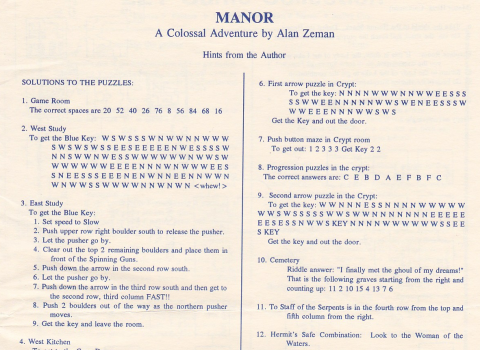 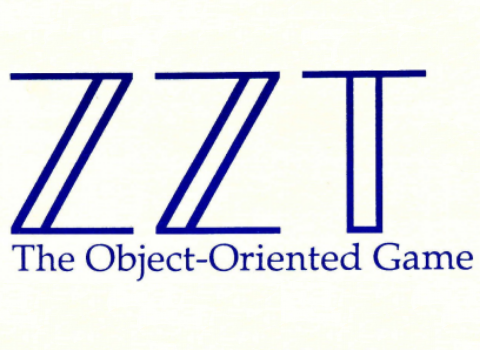