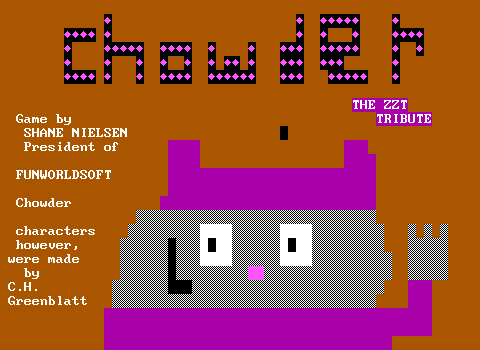 ZZT and its ability to allow children to unleash their creativity 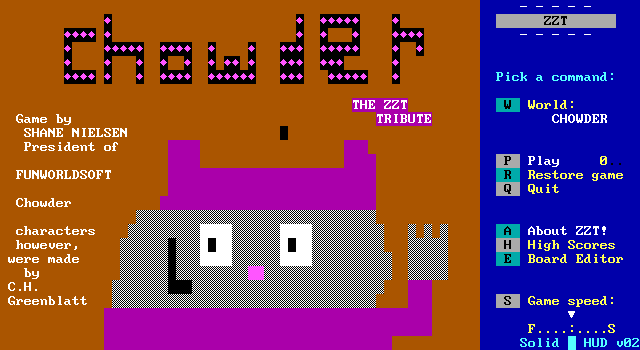 ZZT has a rich history of games being made by children, and I don't just mean teenagers creating their angsty titles or bizarre explorations of subjects they know next to nothing about. I'm talking games made by kids who are of an age where they're currently learning long division. Chowder is a game made by a child and obviously so, but what it lacks in terms of being a well-constructed ZZT game, it makes up for by being a quintessential example of the kind of creative work that only exists because of ZZT.

When I play Chowder, I can't help but find my inner 10-year old resurfacing. Today "fangames" are often put in the frustrating situation of either being developed entirely in secret without any feedback as to whether or not people are interested in the work, or sharing information during development and living in constant fear of receiving a "cease and desist". There's no such cynicism here. Chowder and ZZT worlds like it aren't statements by their authors challenging the original creators to see if they can make something as enjoyable or perhaps even better. There's no catering to an older demographic that the corporation responsible for the original neglects. Games like this are a love letter and by the very nature of ZZT tend to stray so far from the source material that you can just replace the names of key characters and locations from one series with another and likely have the adventure work just as well.

Playing Chowder, you'll find what are normally the doodles in an elementary school student's notebook brought to life. Their love of a cartoon breaking away from demanding toys and DVDs from parents and instead of consuming media, giving them an opportunity to create it. To be able to create something is a form of power, and to be able to do so and have an audience even more powerful still. The origins of Chowder for ZZT are an enigma. It showed up on z2 like any other game, yet it stands out from its peers in so many ways. 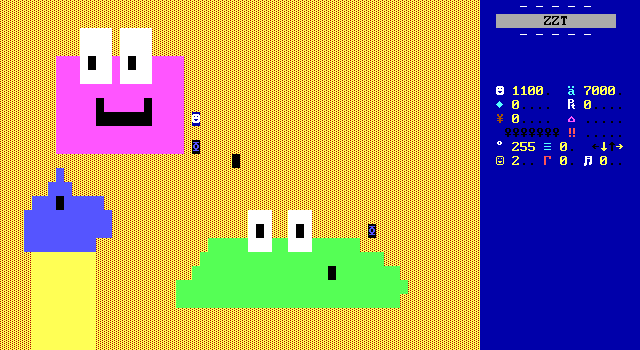 Chowder isn't a ZZT game that's particularly fun to play. Most of the game consists of wandering across big empty boards that sometimes contain large drawings of the show's characters to speak with. They'll tell you which direction to go and little else. A fan of the show won't get much more out of it other than probably recognizing the lesser characters. (I'm not completely out of the loop on Chowder, recalling it and Flapjack being brought up together as creative cartoons that helped pave the road for more cartoons with over-arching stories like Adventure Time and Steven Universe.) However, Chowder as a ZZT game is something that I can't help but feel perfectly encapsulates the ZZT fangame of old, a child wishing they could create something that's part of a series they adore. That Nielsen is able to do so by creating a computer game, something traditionally way out of reach for creative mediums used by children, makes it feel all the more impressive.

I've often said that ZZT's best strength was its ease of use. I was making ZZT games when I was nine and publishing them to the Internet a year later. It's easy as a child to feel like what you make is lesser. Drawings on the back of math worksheets don't get taken seriously. Growing up in ZZT and publishing a world that ran on the same rules as beloved ZZT titles like Burger Joint or Gem Hunter was a liberating experience. Having a game with your name on it in ZZT felt just as impressive as being on a modern video game console. Tell your friends you made a video game when you're ten years old and you'll immediately have their attention. Playing video games was something anybody could do, but to be able to create one? Ask a young me before discovering ZZT and I'd say you'd need a large team, years of experience, and probably a college degree in "computers". Kids don't make video games, but Shane and so many others before him proved those assumptions wrong. 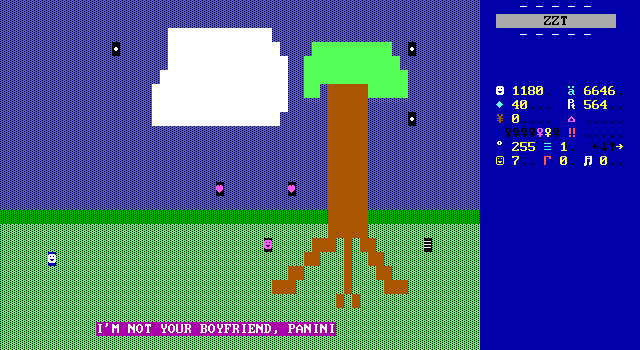 What makes Chowder stand out so much though compared to the other times children have published ZZT games is its particularly late release. In 2009, ZZT was probably as inaccessible as it's ever been. Running it on a modern computer required setting up DOSBox, mounting a virtual disk drive and navigating to ZZT via a command line. Shane created his game using a then eighteen year old MS-DOS program, which I feel speaks volumes about how useful of a tool ZZT is for those new to progamming that despite its hurdles it could still function as a practical tool even then. These days if you want to make a video game, you have so many options, with several, (like Scratch,) being focused to being friendly for kids. That ZZT would still be a serious choice after so many years despite its obsolescence in so many ways demonstrates its still unmatched ability to serve as a launching point for programming.

For a child to run ZZT in 2009, they had far more hurdles than setting up DOSBox. Chowder is a game that predominately uses ZZT's default colors. Most likely, the game was made solely with ZZT's default editor, a deduction that comes from viewing its boards in the Museum's file viewer with visible empties. Here on boards without fake walls for backgrounds you can see the empties left behind where there was once a yellow border. On a technical level, Chowder is far from a complex game to be created with the default editor, but the game still uses some STK colors. Again this lets you hypothesize a little more about the game's creation. For a game to use these colors, there has to be at least some familiarity with what "STK" even is, or at the very least, an understanding of how to grab tiles from other worlds and use them in one's own. You wouldn't get a game as complex as Chowder (as simple as it actually is to play), by just sitting a child in front of ZZT and telling them to press "E" and make something.

That understanding of ZZT as a tool to create with versus just a toy to play with is the critical knowledge necessary for us to have this game in the first place. z2 had some strict requirements when uploading worlds to the site, demanding a text file with certain information, the use of STK, and a minimum size requirement. The policy was a well intentioned one, whose purpose was to help ensure some minimum quality level. These days its looked back on with regret, since it led to the deletion of plenty of games which are now likely lost forever. Shane would have had to deal with abiding by these rules and we're lucky he did. Chowder is a perfect specimen for how kids start off their journey into making games, and just a few fake walls with background colors being included were likely the difference between us having this a decade later or not.

I've mostly been speaking about Shane's Chowder game as an abstract thing, describing what it shows us more than what it actually is. The gameplay itself is rather light, large piles of ZZT's creatures take up space in wall-less rooms leading to a very unsatisfying shooting experience. The bosses are large drawings of the show's characters with a single object endlessly shooting and waiting for Chowder to shoot back. It's somewhat reminiscent of Scott Hammack's Llama Masters however with a lot less variety. Every boss plays out the same way. Although it's fun to see Shane flexing his artistic prowess with bosses like the uh "Wax Candle/Rat-like creature" (according to the Chowder wiki) Gorgonzola. The fights themselves don't feel like much. This is a game where the fun mostly went to Shane during the process of creating it rather than the audience playing it after release. 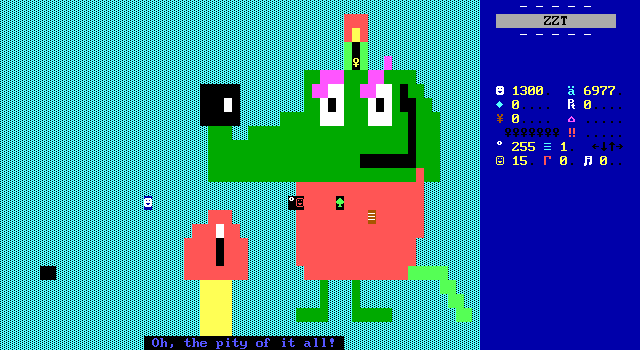 One aspect in which Chowder does genuinely shine is in its writing. As stated, I'm hardly an expert on the cartoon, but from what text there is to read, Shane is capturing the tone of the show reasonably well. There are doubtless dozens of references to specific episodes as the game is constantly bringing up the unique fictional foods prepared on the show. Chowder's quest begins to get some clabbages for a recipe, and you'll hear plenty about fleaspoons of shmoogar, burple nurples, sing beans, thrice cream, and more. I trust that at the time of this game's release, that you could get Shane to talk for hours about the show. There's a bit more than just namedropping the show's cuisine, with Chowder being recognizably himself, getting overly excited and frequently annoying the adult citizens of Marzipan city with his inability to sit still and listen. The character representation seems pretty solid as well. Obviously we've got Chowder. You've also got Mung and his wife Truffles, Schnitzel (who "radda-raddas" as expected), Gorgonzola, and Panini. That exhausts all the names on the show I know, and there are several more still.

So perhaps Chowder isn't a game worth featuring for the reasons you'll find Burger Joint on the list, but ZZT's true power is to take those who otherwise could not create a game and to allow them to do so. It's an excellent example of ZZT opening doors that are all too frequently closed to those of a younger age. It's far from a marvel of coding, but Chowder perfectly exemplifies ZZT's importance as a surprisingly robust first step into the world of game design for countless developers. That, I think, is something to be commended and recognized. 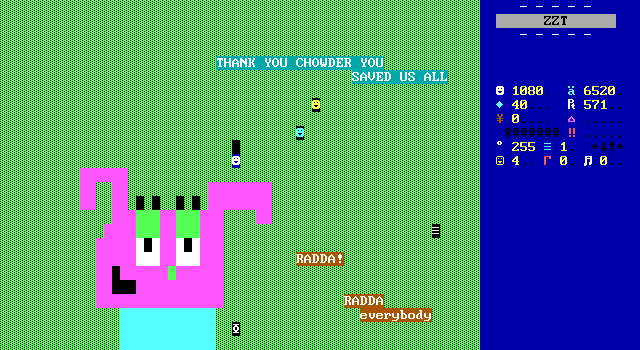 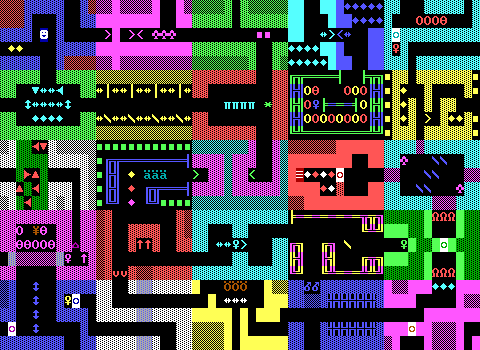 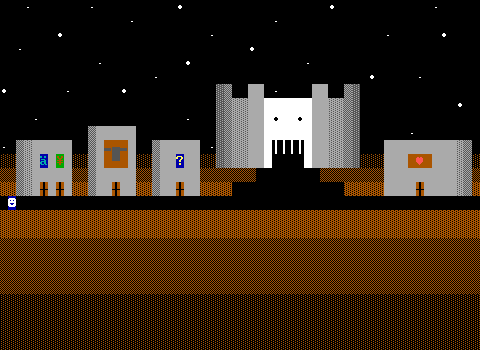 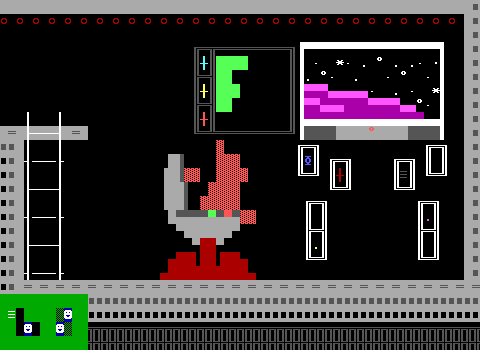 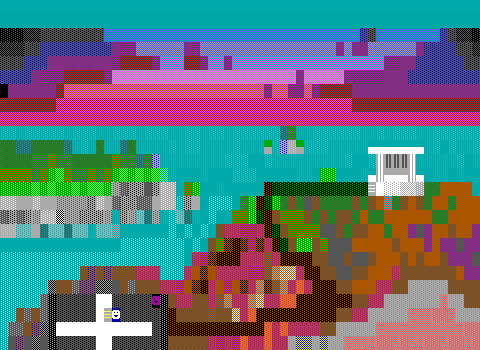