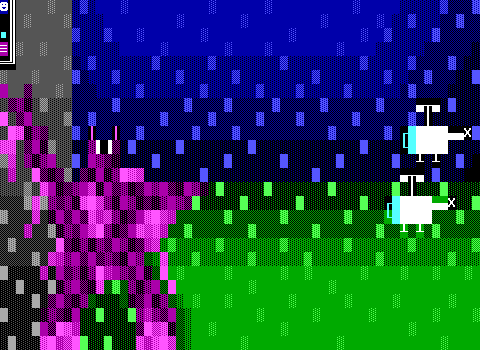 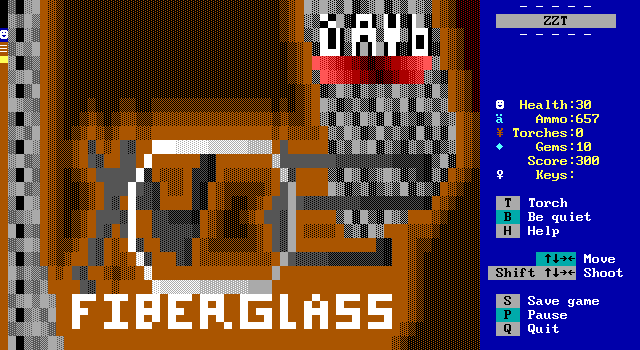 Oh man, remember these? It feels like it's been day five for ages.

I wish I could come up with any sort of meaning with these day names. 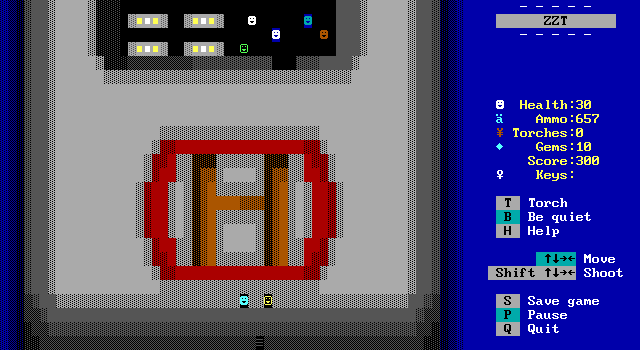 Day six should open up with some celebration. The slime monster is destroyed, and Steve has been defeated. Crisis over. 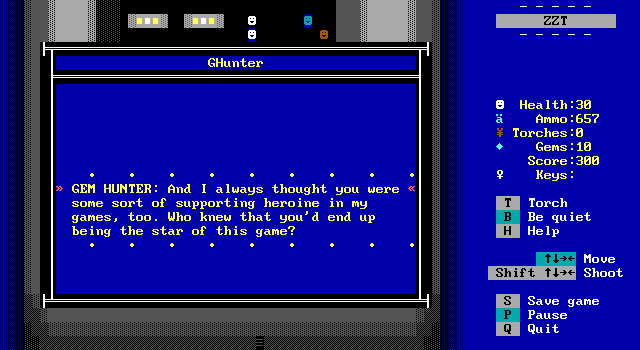 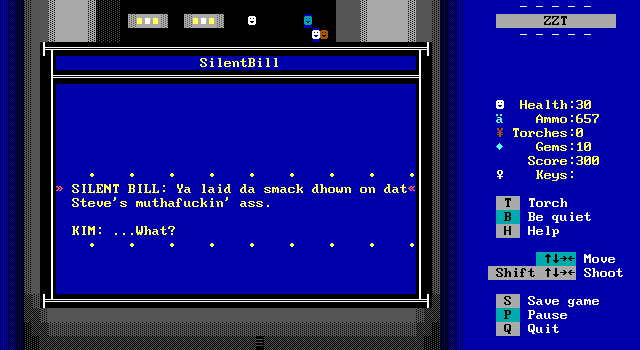 And at first glance, it seems to be that way. Gem Hunter is a little patronizing here to Kim who is absolutely a strong and capable character in the Gem Hunter games. In this game Gem Hunter, killed a doctor and shot Hercules. The latter probably wasn't all that dangerous of a situation since I'm certain everyone else in that room was heavily armed.

With how frequently female characters in ZZT games of this era feel like they have the personality of cardboard, Kim remains a genuinely likable and strong character. Gem Hunter is a lot more boring.

DR. ERD: It's the mission in IOU. Masa was
nowhere to be found. Showdown found a note
that stated...

CUBED ICE: ...that Masamune was coming to
Puerto del Agua...

VOICE: Attention all crew members, unknown
vessel approaching. Speed: 42 welks. It is
heading straight for us.

DR. ERD: Shit... we need to get off this
ship... that's a Sideliner Chopper...
those were FUCKING DESIGNED to take down
large cruisers!

But there's still one thing that hasn't been dealt with, and that's Masamune. This whole xamboxumbadria scenario was caused by his plan to kill off various powerful Hoodians (and humans) in order to conquer Da Hood. Just because Steve's been defeated doesn't mean that Masamune's going to just give up.

Plus the fear that Masamune taking over would result in a ban on rap music is pretty funny.

While Parasite Eve doesn't end with a fight against some dude in a helicopter, it does feature the equivalent of NE's Tyrone jumping out of a helicopter to throw some fancy ultimate-being-killing bullets to the protagonists, which is pretty incredible. Are we out of Interactive Fantasies members who could jump to their deaths for such a purpose?

Masamune's got a cute little animated helicopter that doesn't look like it's capable of taking down a cruiser, but it's capable of finishing off then-Interactive Fantasies member Knightt. 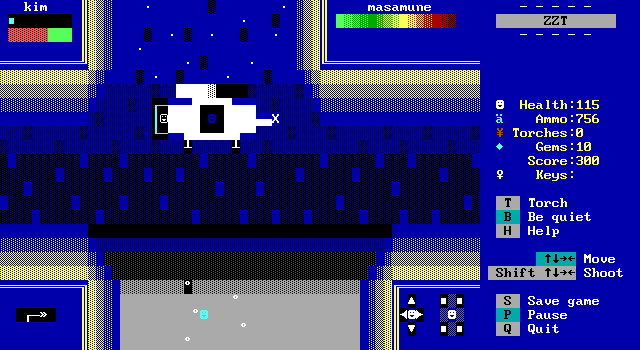 So the real final battle is with Masamune.

Unfortunately, it's no different than the Steve fight. The mounted machine guns that took out Knightt do move around on the bottom of the helicopter and fire zig-zag patterns of bullets, but again there's just a big gap in the middle. It's even more bizarre here because there's no reason the guns couldn't move an extra step from side to side and close the gap.

This also means that Masamune has an attack that just automatically hits Kim, to prevent the fight from being completely free, but it does less damage than what Steve was capable of. 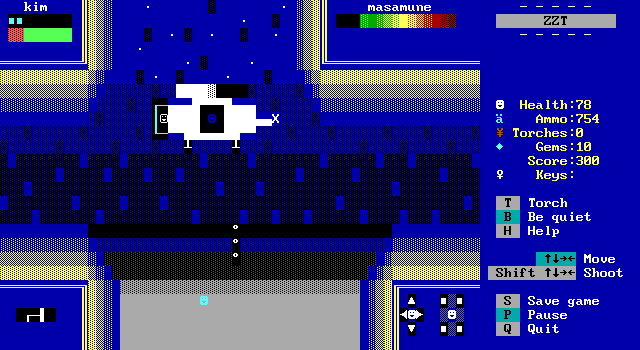 The auto-hitting attack is supposed to be Masamune launching a missile, which also has a physical component to it. Here one gun will stand in place and fire several shots downward which nobody will ever be hit by.

The only danger here is that because of Steve's own auto-hit attack, Kim is probably going to be pretty low on health by the time she gets to Masamune so healing becomes a priority at first.

MASAMUNE: ...Figures. Oh well, I'll just
watch as my helicopter crashes mindlessly
into this ship for no good reason.

Yet another aircraft crashes. 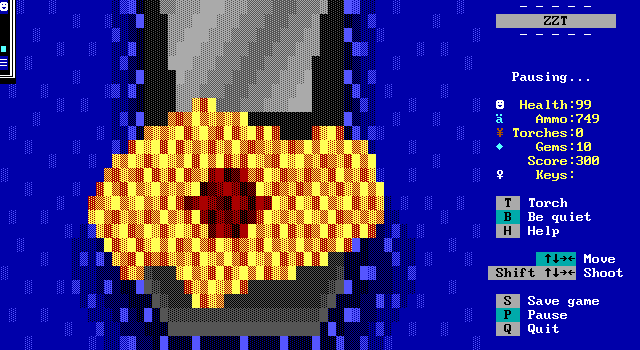 There is a big non-animated explosion, and I can't decide if I like how it looks or not. I think I'm actually onboard with the very chaotic shading it has, but that red blob in the center just makes things look like some weird fried red egg.

One of Sir Issac Newton's laws of motion
state that a body in motion will tend to
remain in motion until it is stopped by
some outside force.

For example: Masa's helicopter going out
of control. It remained in motion until it
hit the outside force, in our example, the
deck of the Mafia Ship, Titanic. The
smaller body was instantly obliterated in
an explosion, and this causes a chain
reaction that blows everything ELSE up on
the Titanic. Both are obliterated. But,
lucky for our heroine, Kim, she had leapt
off the Titanic just before the explosion
and swam away.

Ugh I felt like this was a reference to something having this sort of explanation of physics and just realized I was thinking of Bee Movie. 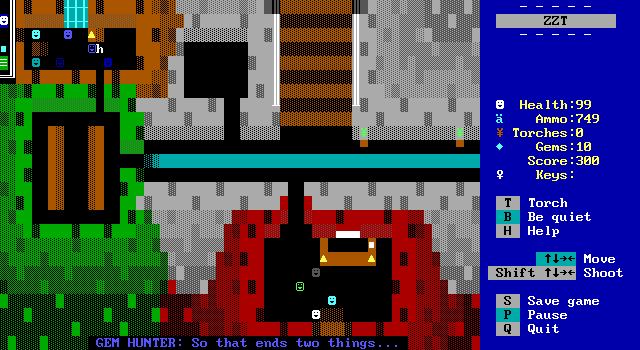 There's one final rendezvous at the station before the game closes.

GEM HUNTER: So that ends two things...
this god damn game and Masa's tyrany on
IOU.

TYRONE: Indeed. Absentminded has taken
over IOU. You may be able to do some jobs
over there, since Masa's gone, Jer.

KIM: I, for one, shall not miss this city.

GEM HUNTER: I think we all need to get the
hell away from this stupid planet.
Whattya say, Ty? You up for randomly going
about this galaxy and all that stuff?

TYRONE: Hrm... let me think... I don't
have anything to do any more and I really
need to star in one of your games...
Oh, why the hell not? Set up an extra bed
for me.

CASSIE: Hmm... what happened to the Evil
Weasel guys?

GEM HUNTER: Espionage went back to Austin
Powers. Cubed Ice and Dr. Erd are holding
a concert over at the PDArena.

TYRONE: ...Some things shall never change.

RENO: Well, as much as you'd probably want
to stay here, the Captain has informed Da
Head Hood that the crisis has been averted
and all that military jargon. Guess what
happens? You all get caught up in the
media frenzy. In other words, you'd better
get the hell out of Puerto del Agua ASAP.

CASSIE: ...I am NOT going to get caught in
the media frenzy. I'll rendezvous with you
guys over at Oasis Villa. Okay?

TYRONE: Fine with me.

KIM: One thing bothers me. Steve got away.
What if he tries this again?

RENO: He can't. Steve loses the ability
to create the Banana of the Heavens after
six days. We just needed to delay him.

GEM HUNTER: That Steve... I really need to
lay the smack down on his candyass.

With the planet saved, it's time for everyone to get out of town before they're overrun with media asking questions.

Steve is still out there, but there's a casual line about how he can no longer create an ultimate being, so everything's wrapped up nicely then.


kev-san
the music, baby. the music.


hydra78
general praise. being the offical white
rapper of zzt.


vampy
for bitching at me every day to get this
done, even though he probably hated every
moment of it.


lemmer and scissorman
for crushing the guts out of things in
their cameo. OHH DEAR


dexter
for the idea of the seekret cameo board,
which was in xod.


voighdt
the "this is an artifact! it belongs in a
museum" quote that prompted me to give him
the cameo in the museum. he also made the
credits theme of this game.


viovis
and this guy's update of the bob that does
business. da sto!


tucan
he's a bastard. and he also prompted me to
use a character named "nacut".


jujubee
anyone who makes a game about impending
doom and what you do before the world goes
to hell deserves to be recognized in a
tseng game.


masamune/docuzuki
for being the (former) tyranical leader of
iou.


atom
for distracting me in the middle of
production by reccomending me to reading
children of jenova, one of the most
kickass serious fan fictions, ever.


ethan_hunt
you sir, are an evil doberman.


fejj
how the hell do you pronounce that,
anyway?


peter gabriel
because i listened to him, wyclef jean,
and dave matthews for the entire time i
worked on this.

The credits are not as lengthy as I thought seeing as there were so many ZZTers included in this game. Lots of folks thanked here don't make an appearance in the main game. 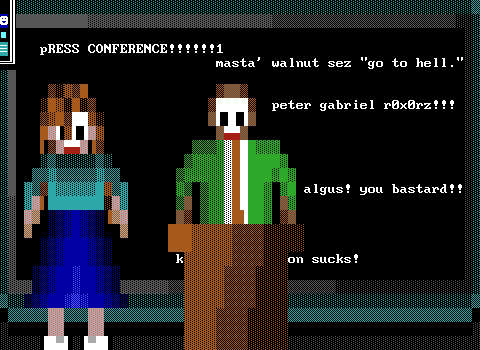