LOME: The Legend of Matt Eatingham

Game of the Month Review: LOME: The Legend of Matt 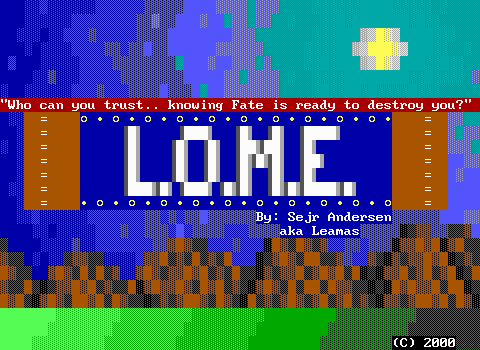 RPG/Adventures seem to be the most common game style. Ever since the success of bongo's masterpiece, Rhygar, many have tried to follow, and no one has yet made a game of the genre as great. L.O.M.E. doesn't quite match that classic, but it's a breath of fresh air to a suffocating ZZT community.

L.O.M.E. starts out as a plot about a mysterious jewel of great power and a young adventurer, stranded on an island, seeking the father who he had never met. The storyline throws some info at the player as the quest begins and then seems to slow down a bit, as traveling the island becomes a major portion of the pie. The battle system is somewhat flawed, yes, because the player can run away from enemies without the fight meter restarting (a countdown using the "gems" label), but to buy things in the game, score must be obtained from defeated enemies, so there's basically no choice but to have a few battles. Not too much fanciness; pre-programmed enemies will leap out at the player at the count of 0, but not too many, nor too little. The gameplay is all about exploration; roaming the land for secrets, or just the freedom of journeying (while some areas in the game do require the player to finish certain tasks before accessing). Therefore, L.O.M.E. also gives non-textual reasons to venture the game through.

Okay, okay, the graphics aren't GREAT. The visuals are fine, yeah, but not exactly beautiful. Still, it's not tedious to tell what things are, and no parts of the game are worse than average, art-wise.

He did everything himself. The music (which isn't bad), the graphics, the story-telling, hell, the ENTIRE ZZT WORLD, minus the STK toolkits used. Just two bits of advice; try to understand the plot from the start to the surprising and amazingly-done finish, and don't let Leamas's lack of good English harm the enjoyment. Thanks for helping the community, Sejr.
Article directory
Main page