The City of ZZT - Walkthrough 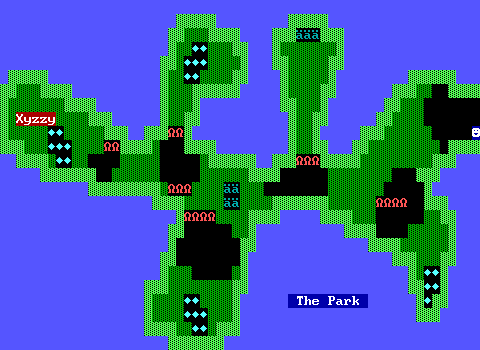 The City of ZZT - Walkthrough

You can go to the pawnshop anytime you like for ammo, health, and advice. You
don't really need the advice since you are reading this.

Go east and pick up the ammo. Go south.

Shoot all the red and blue monsters. This is easiest if you stay in one place
and let the monsters come to you. Get the yellow key. Use it to unlock a
yellow door and get the new key and gems. Repeat on all the rooms. Enter the
hideout when you are done.

Go south. There is a secret passage between the X and O. Go in and get a
1000 point bonus and some gems. Go north.

To get into maximum security, you must blast in. Moving one of the
horizontal arrows in the bottom corner causes a bomb to travel right.
Put a vertical arrow in the way to keep the bomb from becomming trapped.
Once it is stopped, use the blue blocks to move the bomb over to the
maximum security walls. Blast sightly above center the whole way. Repeat
three more times. There are six bombs, so you can screw up twice. Go east
then north.

Move the arrow and talk to the guy. He's the ZZT Bandit and gives you a green key.
Take the key and go east.

Open the green door. You now may open the other doors with the other green keys.
The people don't say much, but you can get some gems. Go south and open the green
door. Take the green key and exit. Go north.

Just try to run through the lions. Trying to kill them all is hard and waste of
ammo. Go to the bum and give him 10 gems. Then shoot him. Then give him 20 gems
for the City Hall Pass. Go west.

Go over to the left of the XYZZY collecting gems and ammo along the way. There
is a secret passage to on the left. Go west.

Open the doors with the red and green keys you have. Run past the beams and load
up on gems. Get the ticket too. You'll need it at the station. Go east, east, and
south to exit the park. Go east.

You need to collect the keys one by one and open the doors. Collect the gems too.
You should open the doors by going down the middle and using the last key to go
down. This way you won't get stuck. Remember to keep a sharp eye out for the
bullets since the are bouncing around. They also travel in lines over the water.
Take the scroll for 1000 points and go east.

Get the first yellow key down by the red monsters. Pick up the ammo and gems too.
Open the first yellow door and kill the tigers. Get the yellow key and open the
next door. Kill all the purple monsters and get the yellow key. You may get the
blue gems, but you'll probably take some damage from the brown monsters. Take
the left gem and you can shoot a bunch of the brown monsters. Open the next door
and kill the centipedes. Touch one of the bombs and get out of the way. It will
destroy the green gems, but leave the key. Take it and open the next door. Kill
the brown monsters. Go way over to the left and go up the column with the key.
This will protect you from the shots. Once you have the key, RUN! You can shoot
up to destroy any shots which might get you. Open the next door. Blow up the
centipedes with the bomb and shoot the lower one. Get the torches. Exit the room
and return to start (e,e,e).

You need three keys to proceed, and only the robot can get them to you. First,
bump the !! button to activate the robot. The period switches the robot to
shooting mode and the arros button switches it to move mode. Using the arrow
buttons, move the robot down to the lower right corner. Shoot away the top and
bottom rows of walls. Go underneath the blocks and push the columns with keys
up near the top. Now you just need to move the keys over to the left and push
them through the spinners with the robot. Open all three doors and go east.

Pick up some ammo and gems then go west and north.

Light a torch. An invisible wall keeps back most of the monsters above, but
start shooting to the right when you get a chance. After finishing those monsters,
go left and kill the ones one the left. Now only the ones trapped by the wall
remain. You'll take some damage, but shoot down immediatly after rounding the wall.
Then go to the bottom row and immediatly fire to the right. Get the key, kill the
last monsters and return to the lobby. Go to the washroom.

Flush the toilet if you like and go through the cyan door. Get the gems and the
key. Return to the lobby and go to the elevator.

This is a nifty item, but a tedious one. The elevator travels right to left and
only stops at floors while going to the left. Right to left, the floors are:

You'll need to get a cyan key from floors 1-4 to open the four doors on floor 5.
Get each key, go to floor 5, open the door, then return to the elevator to get
another key.

It's dark, so light a torch. As you move to the right monsters will appear.
Try to run by as much as possible. Try not to spend too much time killing them
or you will waste torches. Go through the oneway and get the gems, then go
through the other one. Run up past the tigers and get the cyan key. Return to
the elevator.

You need to get all the gems to pass the guy. Kill the monsters outside the rooms
first and get some ammo. Now get a gems and kill the monsters in the mini room.
Don't worry if you shoot the gem on the other side. Try not to open a room with
a purple monster on the other side of the gem. They will rush out and damage you.
Get the key and return to the elevator.

Shoot the top blue guy on the right. This will open the first arrow row. Opening
the others is really easy. After the row moves away, you can now shoot the
blocking walls directly. Go south and get the cyan key. Return to the elevator.

Open the first door. You'll need to get all the gems and push each block up
or down to release the arrow columns. Moving through the shots is pretty easy,
just step two spaces at a time and take it slow. Open the remaining doors and
get the gems. Talk to the mayor three times and bribe him the 100 gems the
third time. He'll give you and ID card. Get out of city hall and head west
twice to the train station.

Talk to the ticket agent and take the purple key. Talk to the conductor and
board the train. Talk to the passenger and enjoy the short train ride. Go
west when the train stops.

Enter the pub and end your quest. Get the scroll for 10,000 points and talk
to the guy to end the game and get your final score. Short wasn't it!