Mooseka Rules With An Iron Fist 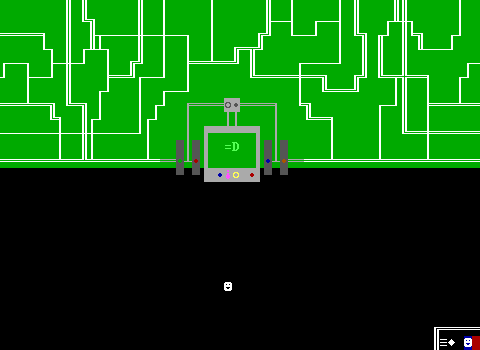 The community has Z2 owner Dr. Dos to thank for the latest addition to the popular cameo-game stockpile, Mooseka Richtlinien mit einer Eisenfaust (or, Mooseka Rules with an Iron Fist). A cinematically-inclined comedy using Zaphod`, aka Deathwinter, the Mooseka Z2 administration, and the Weekend of ZZT as its bases, MRWAIF is a very well-written, lighthearted, well-drawn by Nadir comedy that has hooked some rave reviews on Z2 and given Dos his much-deserved place in the limelight.

As Zaphod`, while chatting to Dr. Dos one day over AIM in a stained shirt, the shredded remains of your will to live are burnt to ashes as you are informed that your worst enemy, Mooseka, is now the unquestioned head administrator of Z2. The naturally following anxiety attack, marked by a conveniently transcribed panicky scream ... "haaaaaaaaaaaaa" ... causes you to black out. Thus begins a haze of suicidal activity with the expected GODEDRP clichés of his daddy's shotgun and a family pack of aspirin, to the background music of Nine Inch Nails' Hurt.

Upon awakening near the Wikkit gate in a platform detached from time and space, and exploring a bit, the discovery of a quarter on the ground prompts a bizarre discrepancy between the laws of Newton and Murphy, and you begin a gravitational tailspin into another area of the plane, whereupon you meet other banned members of Z2. Apparently, your having fallen from the sky fulfills a prophecy that they shall successfully overthrow Mooseka and have Z2 destroyed ... with your assistance, of course. Discovering your ability to turn invisible by grinning like a Cheshire cat lends some hope to the expedition, and after a brief meeting, and an unfortunate accident involving Boxtop and a bushy-tailed canid, you and your new friends set out for Z2 to stop the Weekend of ZZT in its tracks and expose Mooseka for the malevolent, destructive dictator he is.

The thing that stands out most in MRWAIF is the strength of Dr. Dos' writing. Reliant as it may be on the derision of community members (most of whom, Zaphod` included, apparently played the game and loved it), it is in places very, very funny and creative. We're not talking just a set of quotes pasted around a banal adventure, though; Dos has made a reasonably elaborate plot for his characters to follow. Most of the humour is in one-liner or slapstick forms rather than in long, elaborate jokes, which engages the player's interest effectively. A community member not familiar with the various catchphrases and furry tendencies of some of the characters would not get as much out of the game as a long-standing community member, but the game is fortunately not over-reliant on inside jokes, and even newcomers should find it an entertaining cinema game. My favourite scene is probably a tie between the invasion of the Z2 building, and Knightt's death scene.

The artwork is not Dr. Dos', but was commissioned from Zenith Nadir. Unfortunately, Zenith never got around to actually finishing the artwork, and as a result there are some glaring bare boards with Dos' text instructions as to what is supposed to be drawn. It is a shame that Dos didn't have a go at his own graphical work, but it turned out all right in the end; what Zenith has submitted is, as is to be expected, very good and fitting with the tenor of the game - I personally find the way he draws Zaphod`, with the understanded facial features, hilarious.

There is no music. 'Nuff said.

This is the funniest
picture ever drawn.


A cameo game like this one strikes me as much more creative than, for example, classic cameo romps like Sim #darkdigital, and I think it's a step in the right direction for an increasingly tight-knit community in which everyone seems to know everyone else. It would be easy to dismiss MRWAIF as just a flash in the pan exploiting catchphrases and references to make its point, or as a cruel and unprovoked cheapshot against community scapegoats, but it deserves more than that; it's very, very funny, and well-drawn (to a point). It's a real shame it's technically incomplete, and that Dos didn't try to do the graphics himself, but otherwise it's highly recommended; I've yet to speak with anyone in the community who claims they don't like it, and even Eurakarte disliked Frost.

Good work, Dr. Dos, you landed yourself an MTP. Don't you and Nadir feel speshul now?