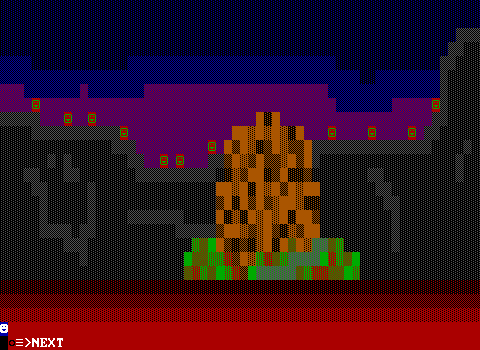 June 2003 is MTP's first anniversary, the thirteenth monthly award I've given out to the community. It was no difficult decision this month, either.

Overall a disappointingly weak month, June's semi-noteworthy uploads included Willow Wars, a very long newbie adventure game by Appliance; Master Raze's Red Faction: Demo; the rather odd The Movie Channel by a certain zane; and My Liver Hurtz's second installment of his Nexus series, Nexus: Time's Arrow. The second and third, being demos, were ineligible for the award, and in the end Hurtz's game came out on top.

James Concade has just returned from his eventful trip through time, where in Nexus: Future's Past, he supposedly averted a major disaster. However, upon leaving the Nexus and returning to his own time, Concade meets his grandson, Andrew, who informs him that his mission is far from over ...

After a flashback to an attack on an alien ship from the perspective of Andrew, the Nexus gate is attacked and damaged, and they are forced to jump to Venus in order to reach another gate capable of temporal leaps, in order that they might avert the alien attack.

The gameplay is chiefly based on puzzle-solving and shootouts (isn't every ZZT game?). The puzzles are in a classic ZZT mode; blinkwalls, move-and-shoot objects, and (shudder) pre-programmed monsters. While reasonably designed, there's nothing astonishingly original. A lot of it involves dodging bullets from spinning guns, manoeuvering between bullets in a field of ricochets, shooting clumps of pre-programmed monsters... all things we learned how to do from Town of ZZT. Not to imply that I've never used a ricochet-field myself, but still ...

While the technical skill in designing new engines that Hurtz demonstrated with Z*Bert is disappointingly sparse in Nexus: Time's Arrow, Hurtz's art appears to have improved substantially from Nexus: Future's Past, as illustrated by the screenshot to the left ("K'ton"). Would I be right in saying that Quantum_P's influence is involved, Hurtz? Regardless, the playboards are not unattractive, but could have done with a little extra graphical work.

Welcome to
the Jungle


Plotwise, it's obvious Hurtz has put reasonable effort into the writing of the game. I could go into my theories on the implausible nature of time travel, but hey, this is a sci-fi, I guess. But why would a government department send only one man to seize control of an entire alien ship? Why on earth would an auxiliary Nexus portal be located on a remote planet like Venus? Some parts of the game don't really make sense, and this is where it is unfortunately let down. Also, we don't really get to know the characters very well.

All up, not at all a bad effort. Hurtz seems to have his facts straight in the area of plot, and is certainly improving, but he needs to be careful not to shun the graphics side of things, and avoid tired ZZT clichés. The era of the preprogrammed monster is over. Otherwise, not a bad game.