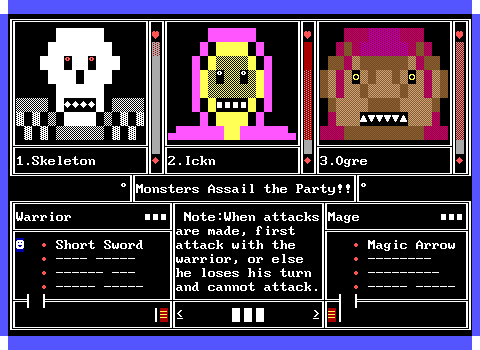 A warrior and his unintentionally immortal mage friend seek glory, wealth, and the lost crown of the dwarven king

An early DarkMage/Nivek RPG effort. If you're seen these before you know exactly what to expect. High fantasy adventure, way too empty rooms and mazes, but a lot of pleasant surprises thanks to the art throughout the game. The landscapes don't really impress in this one, however the battle portraits in the game's numerous RPG battles give you something to look forward to.

Search for King Ironhammer's treasures and stolen crown while fighting orcs, dragons, and the undead with your nameless party consisting of a warrior and a mage. Throughout the game you can acquire new weapons and learn spells to deal with stronger foes. The battles are a bit buggy and a few unfortunately broke entirely, plus there are some known issues disclosed by the author that prevents certain attacks from being used. This is counterbalanced by the fact that when your mage is dead they can still cast spells!

A fun little game that suffers from its programming errors and very slow structure. Crank the speed up though and you've got an okay-ish RPG that could stand for some of the fat to be trimmed and some detail to be added.