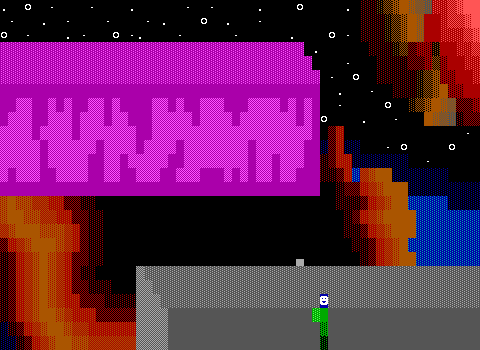 Content warnings: All kinds of drug use in game, discussion of the author's passing at the end.

Join Freddy the Ferret on his trippy quest to obtain the ultimate high. But are drugs all they're... cracked up to be? (Draco's joke not mine.)

A classic of the late 90s that shifted perceptions of the "Trippy" genre from lucid daydreams and randomly waking up in surreal worlds to honest to goodness drug trips. Unusual color choices, weird characters, and some vivid landscapes make this one a standout title of the era that made Draco a name to keep an eye on.

http://zzt.org/fora/viewtopic.php?f=5&t=3613 is the announcement I was after.