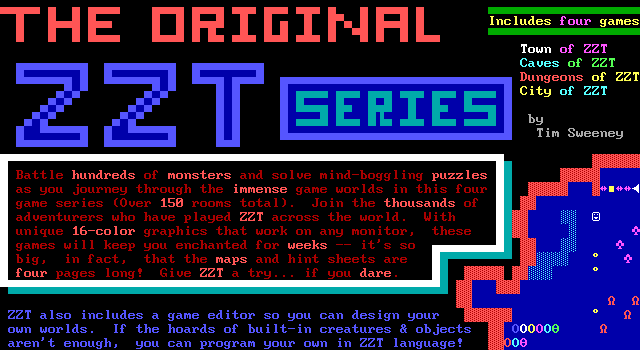 What is ZZT and why is it still in use 30 years after release?

ZZT is a text-mode MS-DOS game originally released on January 15th, 1991 by Tim Sweeney of Epic Games (originally under Potomac Computer Systems). The game consists of several playable worlds, the shareware Town of ZZT, as well as registered worlds Caves of ZZT, Dungeons of ZZT, and City of ZZT. The gameplay is simple, with the player controlling a white on blue smiley face that can move and shoot in four directions. Even at the time of its release, ZZT was a technologically simple game using text graphics and PC speaker sounds, but its limitations served to fuel creativity and an impressive amount of users went on to create their own ZZT worlds using the program's included editor. 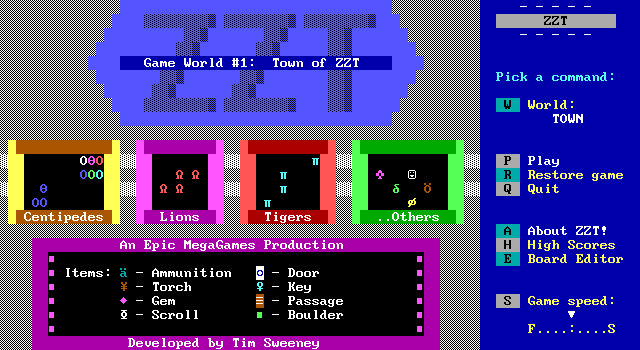 The name "ZZT" is not an acronym. Its title was chosen so that it would appear last in software listings and has no specific meaning. A fan-made backronym by John Beck suggested that ZZT could potentially stand for "Zoo of Zero Tolerance". Although unofficial, Tim Sweeney cited Beck's suggestion in an early newsletter which gave it a lasting presence. You'll sometimes run across references to this interpretation of the name to this day. 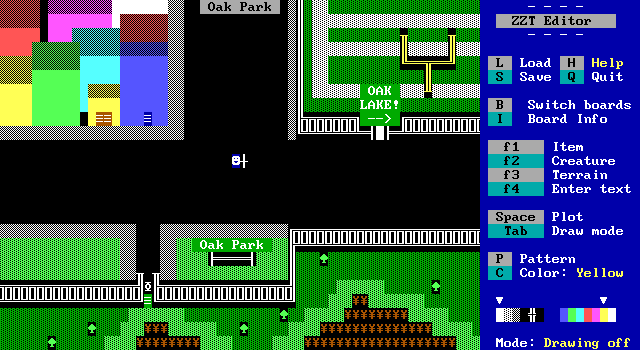 ZZT found success from its inclusion of a built-in editor available even to those who only had the shareware version of ZZT. This editor allows players to create their own ZZT worlds utilizing numerous built in elements for items, creatures, terrain, and a scripting language that allows "object" elements to be programmed. The scripting language known as ZZT-OOP is notable for being incredibly simple to use, allowing people without programming backgrounds to create games. On a surface level the language allows basic functionality to display text; to have objects move and shoot; to test basic conditions; and most importantly for objects to send signals to other objects to jump to different labels in their code. Over the past thirty years people of all ages have created ZZT worlds thanks to the incredible accessibility of ZZT's editor and scripting language. These worlds developed in complexity over time taking a language with seemingly limited functionality and allowing it to be used to create complex "engines" such as producing procedurally generated dungeons, RPG battle systems, inventory based adventures, and even generating fractals.

ZZT's financial success allowed Tim Sweeney to continue funding game development and growing Epic into the major gaming company that it is today. If you've ever played Unreal, Gears of War, Fortnite, or countless titles running on iterations of the Unreal engine, that experience is owed to that little white on blue smiley face that picked up purple keys all those years ago. 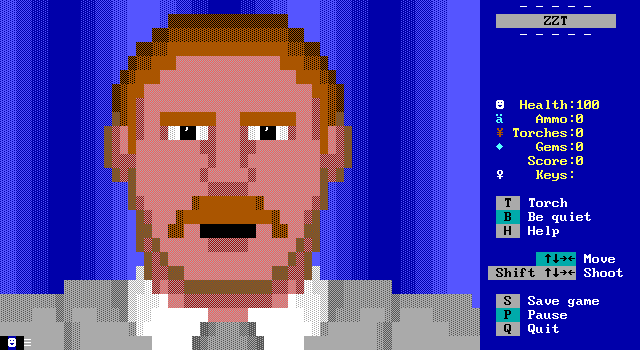 Empowered with the ability to create games and other worlds with ZZT's editor, its community produced more than 3000 titles since 1991 creating games of nearly every major genre. ZZT has seen puzzles, adventures, rpgs, platformers, dungeon crawlers, among others. The community has kept ZZT relevant for so long making enhanced editors such as KevEdit with native support for undocumented and unintentional features of ZZT as well as quality-of-life improvements such as copying/pasting of code and elements, object libraries, gradient generators, and other helpful features.

Having been released in 1991, ZZT is an MS-DOS program that modern OSes can't run on their own. Throughout the 2000s, the most common solution to this was to use DOSBox and emulate MS-DOS, though this wasn't without its troubles. In particular, DOSBox and ZZT don't play nicely with regards to input handling and PC speaker audio and because of this DOSBox is discouraged for playing ZZT worlds today. Over the years numerous attempts at recreating ZZT from scratch were attempted, but with ZZT's original source code having been lost, none of them ever quite took off over DOSBox.

Today, the recommended method for playing ZZT is to use asie's Zeta emulator, which focuses on emulating only the portions of DOS needed to run ZZT (and Super ZZT) and nothing more. Zeta's release in 2019 helped ZZT to reclaim its accessibility by eliminating the issues with DOSBox and need for configuring file-systems and emulation settings. Playing ZZT with Zeta is as simple as putting ZZT, Zeta, and some ZZT worlds in a directory and running the Zeta executable. For complete instructions check out the ZZTing with Zeta article. The Zeta emulator is quite versatile, running on Windows, Linux, and in web browsers using HTML5 and JavaScript. Nearly all ZZT worlds hosted on the Museum of ZZT can be played without leaving your browser by clicking on a file's "play" link.

In addition, in 2020 asie released The Reconstruction of ZZT, completely reverse engineering the lost source code of the original and writing Turbo Pascal code which compiles into a byte-for-byte identical executable with the official release of ZZT v3.2. This reconstruction not only allows ZZT to be more easily modified (and in the future ran natively on modern devices without relying on Zeta at all), but was done with Tim Sweeney's permission and released under an MIT license. This clarified license allows anybody to include a reconstructed ZZT (and Zeta) freely with their worlds regardless of whether or not the world is free or requires payment. These efforts make ZZT a surprisingly attractive option for indie game development thirty years later with support for running in browser and on multiple operating systems.

With thousands of worlds, newcomers to ZZT can be a little overwhelmed with where to start. Here are a few suggestions to help get you started with ZZT! You may want to...