Game of the Month Review: The Misadventures of Mega Job: The Epic Tag Team 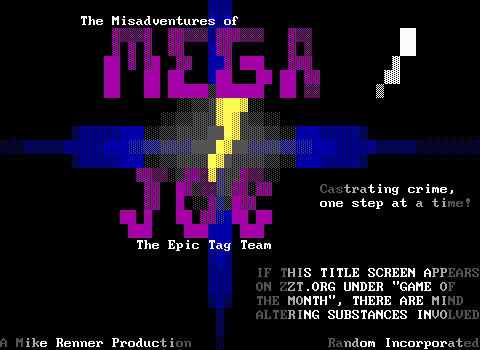 It has been a fiercely competitive month in the GotM stakes, as Herc would've probably told you had he not been busy with things of grave import! So I, Kracken, am here instead as his cheap replacement for this month's dealings.

Two muchly worthy mentions this month would have to be Infestation 3 by the illustrious Coolzx and Mazi-Oog by the beauteous WiL; two games of high standard that would have, with little doubt, probably won the award in lesser GotM'ing months. I3 features 20+ rounds of gun-toting action with some of the most adorably drawn bloodthirsty monsters I've ever seen; Coolzx's graphical ability is awesome. Mazi-Oog is a intriguing game belonging to a hybridized genre of action, puzzle and strategy; and while being one of the most user-friendly ZZT'ing games I've seen to date (the helpfile is most shiny), also successfully shows off WiL's formidable abilities in programming and in making an entertaining game.

But enough of that. What I am reviewing today folks, is GotM and Tseng's (possibly) final ZZT game, The Misadventures of Mega Job: The Epic Tag Team, which I shall henceforth refer to as 'Mega-job' for simplicity's sake. Mega-job, which I also had the fortune of beta-testing, could be called a game about the finer things in life; but is mostly a tale about 2 oddball part time wrestler crime-fighters residing in the corruption-filled pandemonium of Beefville. The plotline entails the? well, the Misadventures of El Janito: The Mexican Stereotype, who is quite small and Beef the slightly annoyed, who is slightly annoyed. El Janito has powers of summon, and can call upon many illegal immigrants to hurt stuff on his behalf in dire circumstance, whilst Beef wields the formidable powers of instant Spam fabrication. Yellow/Red and Blue spandex respectively, of course.

Enlisted to the scene by the effervescent pyrotechnical goddess of wrestling, they start out their careers in the decrepit warehouse that is the Job Cave, an area that serves as a figurative pit stop for the rest of the game. You play the game as Beef and soon find out that all major gangs in the vicinity have erupted into violence and that the mayor's daughter, Libby the helpless gal, has also been kidnapped. With this, the mismatched heroes spring into the fray, and from here you must deal with the SSKKKM, Muslim Mafia, Average Pink Band and the Dark Order of Earls before you can rescue Beef's stalkee- erm, beloved.

The game is mainly action-based, but also has boss mini-games and elements of 'lock and key' puzzles woven throughout it. Between scenarios, Mega Job makes use of a cunning City Map engine to navigate. Aside from its above average graphics (come now, they aren't THAT bad, Tseng), what stands out about Mega Job is its stunning game play. Not only are the mini-games and general action within the game entertaining, but the game is also quite amusing, as its intention and perhaps most of all, notably fulfills its quota of hysterical people running around. In other words, Mega Job succeeds because it's not only a fun game, but also because Tseng is quite an amusing bastard.

As aforementioned, this is also possibly Tseng's last ZZT game (yeah, but he's been saying that for the past four games - Funk); which gives you even more reason to play it, for you may never see a game of this uniqueness and quality ever again. It's more than a worthy download, and I think I speak for many of us when I say that I am saddened if it is indeed his final game.

It is my advice that you download and play it, or teeth shall be gnashed at my end. Yes, that is a threat!
Article directory
Main page