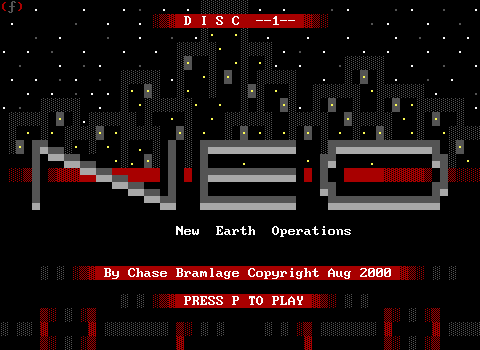 This month's Game of the Month goes out to the Chase Bramlage; a guy who has not been in the ZZT scene for that long, but has been ZZTing for a really long time. This year, he surprised us with good games like Bloodlines, Operation: Obrian, and now disc one of New Earth Operations. Other candidates for this month's GOTM were Gems and Pipes by Jojoisjo and Psyche by Zenith. Before I explain why my choise fell on NEO, I'll give you a short summary of the plot of this game...

In the beginning of the 21th century, more and more research goes in the manipulating of genes. The USA founds the GRD (Genetic Research and Development). Other countries founded similar organisations. Among them was China, of which their organisation found a cure for AIDS... This quickly made China the most powerful country in the world. The USA fell into a long recession. To enlarge to market in the hope of fixing this, they combined several cities into one large Macropolis; the New Earth Operations (N.E.O.) bill. The USA became the genetic capitol of the world again. A special forced unit called the G.E.C. was created to prevent the USA from the rebelling forces in Russia. Later on, the E.R.G. was formed by an Asian company. This company could equal the strength of the G.E.C... This game tells the two different stories of two diffent people; a G.E.C. soldier called Ace, and a man who is captive of the E.R.G. called Blade. To be honest, I don't really get the plot of he part with Blade, but that's probably since this is only disc 1 of the game...

AN.E.O. Disc 1 is actually a relatively short game; both the storylines have only 5 playable boards in it. Both they have a different way of playing; Blade's part is a side-scroller, while Ace's part centers around action (shooting soldiers).

What makes N.E.O. a really awesome game is it's atmosphere. Chase has managed to make a richly detailed setting for this game, with which he proves to be a great plot-writer. The graphics are also good, they fit perfectly with the game. The only thing which is a shame about the entire game is that it is a little easy (except for the 3D shoot-out board in Ace's part), and can be completed in a quite short time. Other than that, this is a kicking game, and a recommendation for anybody to download.
Article directory
Main page