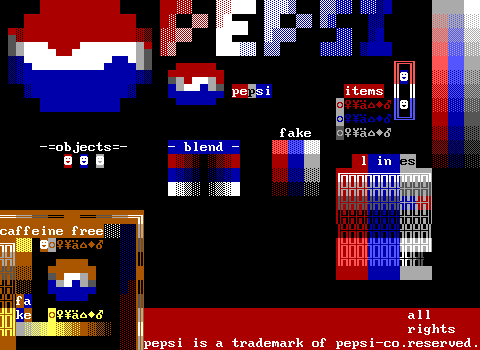 Happy STK day everyone! On January 1st, 1994 Alexis Janson released the original version of ZZT Tools, a collection of worlds and documents providing data useful for ZZTers. This included an ASCII character chart, a work in progress overview of ZZT's file format, information on how to access and use Super ZZT's editor, bugs and limits in ZZT, cheats, lock information, and more.

We do not have this original 1.0 release as version 1.3 was released the very next day (and helpfully has a history document).

Most importantly though, this collection included Super Tool Kit, a world created through hex modification to produce many ZZT elements in colors not normally accessible through its editor. This led to a dramatic shift in how ZZT worlds looked with bright colors giving way to darker ones and more realistic coloring now available. Brown caves, gray skyscrapers, skin tones that weren't just yellow or red, and more became possible.

If you're familiar with STK or following the Worlds of ZZT Twitter account you're doubtless familiar with STK boards. These boards were frequently imported into ZZT worlds to provide quick access to them by copying them into the pattern buffer in the editor and placing them as needed from there. As time went on people began to create their own toolkits, cramming elements and colors that they found to be most useful onto a single board rather than having to import multiple STK boards. These toolkits also frequently included blends, specific combinations of elements to give off an aesthetic of swamps, fire, sunsets, and so on. Prior to the 2000s, this was the only real way to get access to these colors. Modern ZZT editors of course allow selection of all colors directly, and as they become more and more dominantly the tools used for creating ZZT worlds, the era of the toolkit faded.

In the late 90s, Zenith Nadir begin releasing Z-Files, a hand assembled compilation of the latest version of dozens of toolkits. This project continued for more than a decade, well past the era in which these kits were most useful.

Today, they are pretty much obsolete beyond perhaps referencing them to see components useful in various blends. Nonetheless, they are some of the most visually distinct ZZT boards around, almost always getting some attention when posted by the Twitter bot. They are ZZT at its most vibrant, colorful, and oftentimes chaotic as creators tried to use every last tile on the board available.

All of this began because of Janson's work with ZZT Tool and Super Tool Kit, ensuring that in addition to her already prominent status as one of ZZT's most talented she rose to a legendary status, having arguably the greatest influence on ZZT second only to Tim Sweeney.

Recently, asie uploaded several official releases of various toolkits, and so today would be the idea day to publish them. Toolkits can reveal ZZTer priorities. This one focuses on including terrain, cramming blends together, and all non-blinking colors of objects. ZZT's stat limit of 151 means that vast blocks of objects like these take up a huge part of the board's budget. Some toolkits aren't afraid to span multiple boards. This allows them to be more comprehensive and include stat elements. Sometimes they contain other useful text or objects like the scrolling starfield effect here. 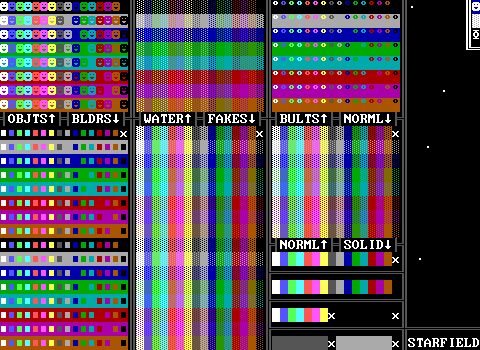 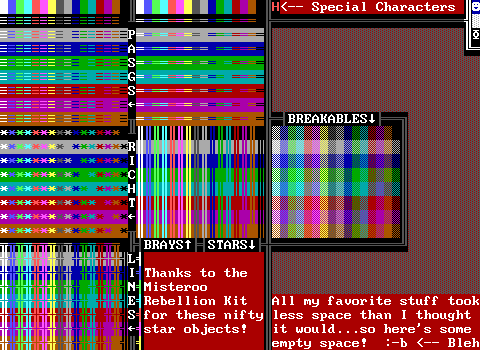 STK on its own wasn't fully comprehensive, and others released companions to it over the years. Prior to external editors letting you modify any properties, you'd sometimes get boards like these which include stars that move more slowly and bombs that will detonate faster. 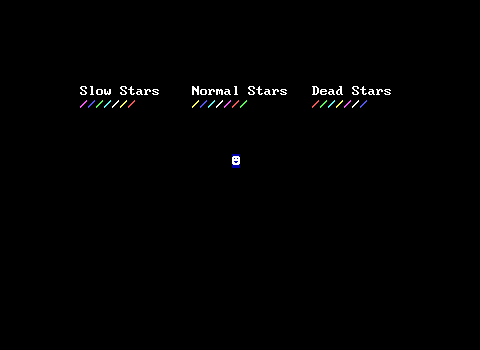 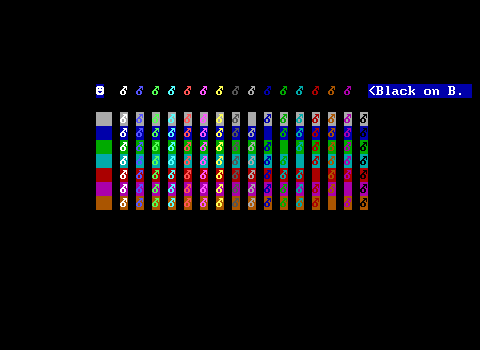 This one specifically requests that if you use the toolkit that you leave it in your world so others may do the same to proliferate the toolkit. Some kits get a little unwieldly in size. But you're set if you ever need a dark cyan on dark purple vertical blink wall ray. 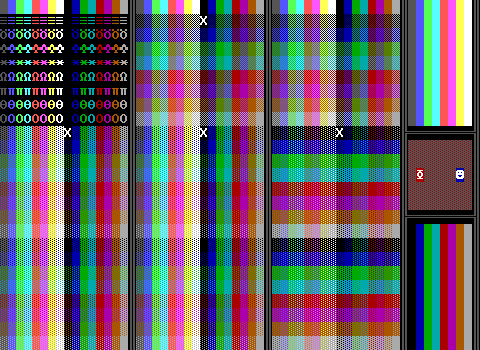 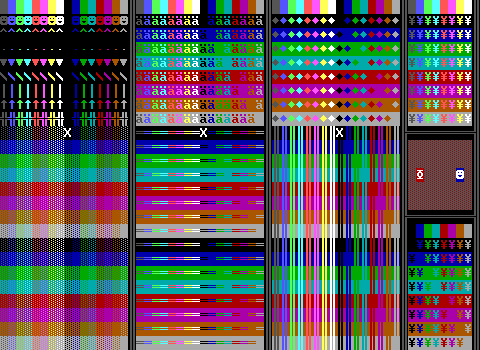 You can see the popularity of the 16x8 blocks for comprehensive layouts. 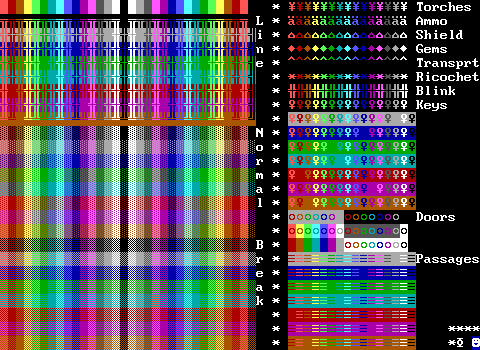 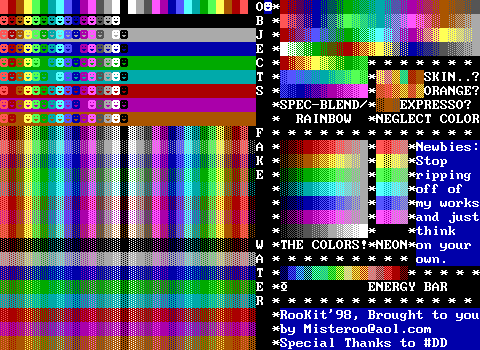 While Z-Files was meant more to help you find a kit you liked rather than a comprehensive scrape of all of them, Quantum here did an incredibly thorough job resulting in this nearly 900 board compilation of every version of every kit he could find in z2's hosted files. 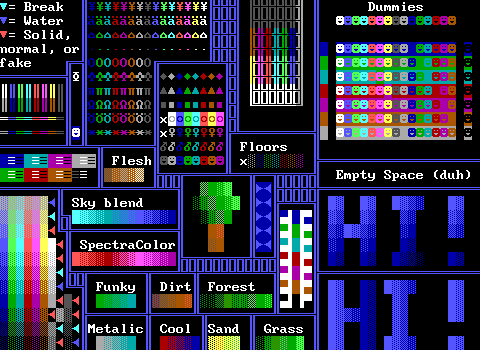 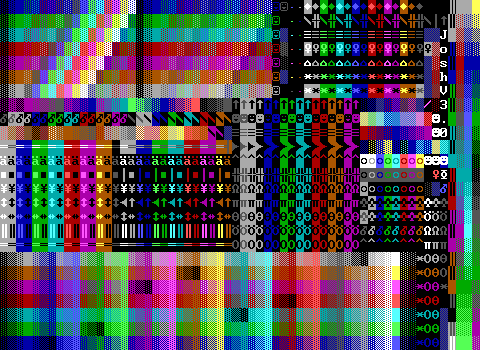 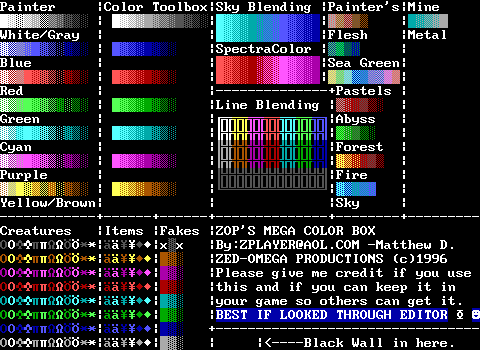 This one in particular was an immensely popular base, with several derivative kits just starting with this and filling up the unused space with other elements. This one is looking nice and clean with every clearly labeled, including the blends. It comes at the cost of comprehensiveness however when you compare its offerings of walls to Shades Toolbox above. 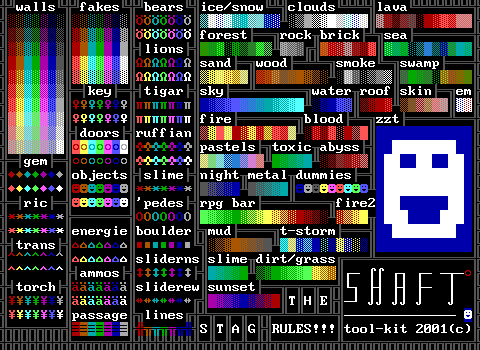 Back in the day, before I went and made my own toolkit, I was a proponent of SNACK. I liked the 3.0 version though as it was just a single board. SNACK 4 includes empties of all colors so you can #put things on them and they'll use the empty's color. 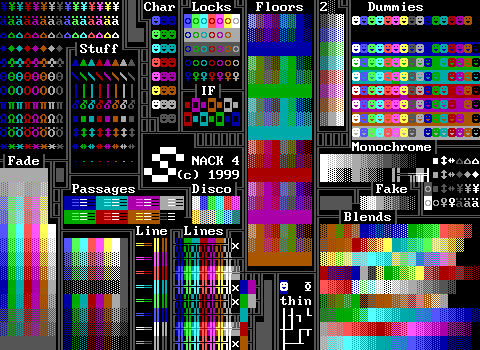 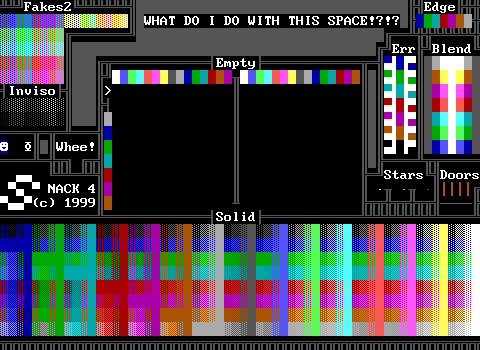 Like with ZZT games, toolkits also increased in complexity as time went on, making these earlier ones that don't come close to filling the board feel a little empty!