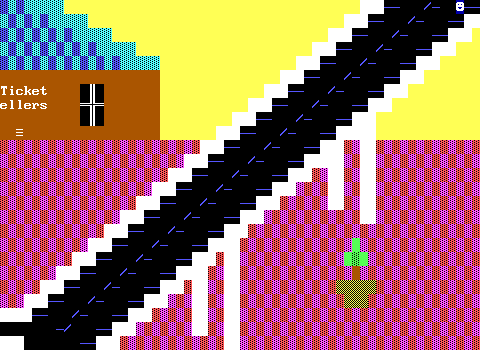 Livestream of the ZZT world "Your Rich" by Tomcat, Woody, and Michael (1999)

An abandoned project by three brothers later resumed before being abandoned again. You're supposed to find a way to get rich and pay the rent by purchasing a winning lottery ticket, but even that isn't a surefire winner (imagine). Instead you mostly just wander around in "Middle Of Nowhere" checking out stores and wishing you could afford to buy anything.

Despite being marked as incomplete, there's quite a bit here. Though the game says it's only 10% finished which gives pretty solid clues as to why the game was never completed. Still, it's a kind of fun to explore the town and just see what you can find and who you can harass.

Be warned though that the game sets flags without remorse and rarely clears them. You're almost certainly going to run into issues because of this. It's worth looking at in the editor for things you may have missed because of these issues or to see content that hadn't been fully integrated into the game yet. Overall, it's a neat little diversion that may be worth turning the gamespeed up a little for.