One of the most iconic ZZT worlds. One thousand ways to die. 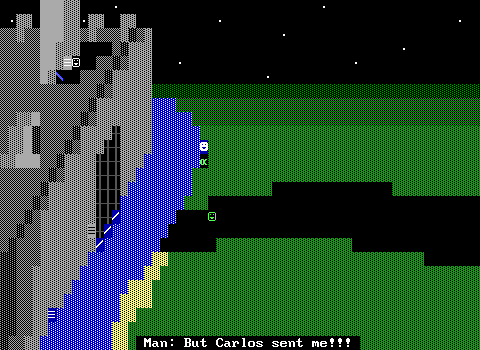 Livestream of the ZZT world "Mission: Enigma" by Alexis Janson (1993)

Infiltrate an old-timey fortress in the far future with nothing more than six bullets and some torches in this iconic ZZT world. Its title screen cinematic set the standard and would go on to inspire derivatives (or some outright wholesale lifting of its jokes) for years to come.

Then the game itself is a a dense puzzle game trying to make it from room to room without getting yourself killed, or worse running into a softlock. This includes an iconic moment where a knife is shot out of a wall at you and the player is expected to catch it in mid air for later.

Lots of ambition, some very impressive visuals and effects, and all this for 1993! This is a high mark for ZZT and while its dead-man-walking scenarios can make it a pain to play without making lots of saves, it really holds up. It's easily one of the better ZZT worlds out there today and at its time goes considerably above and beyond expectations for what's possible in a ZZT world.