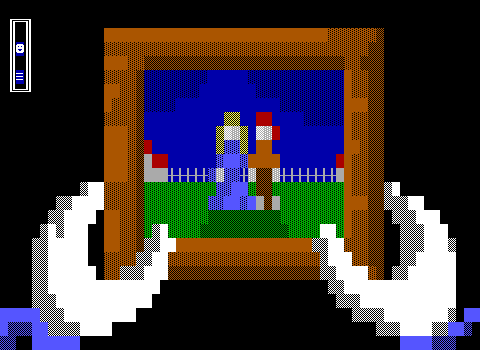 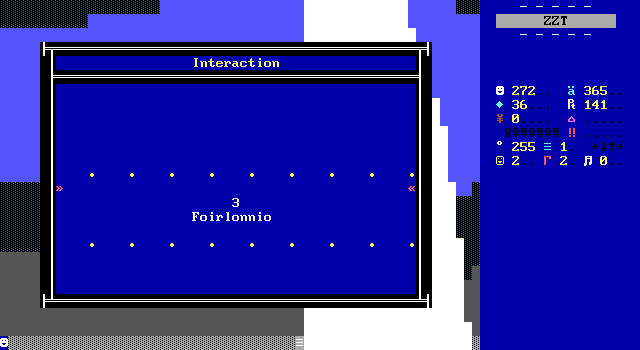 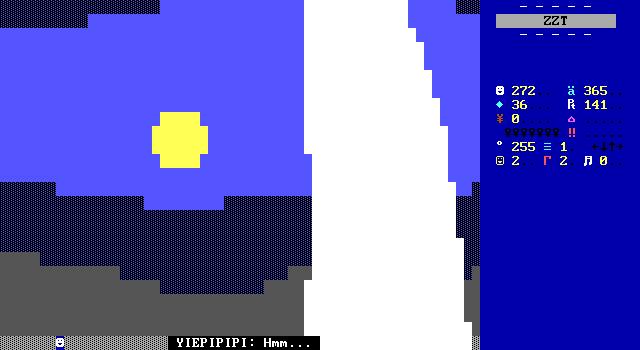 Chapter three is where things take a turn. The board is a bit less abstract here, but it's still an odd read at first. Yiepipipi is corralled along the bottom row of the screen where there appears to be a massive white wall blocking her path. Unlike the gate from earlier, there is no keyhole to pass through, but hidden beneath the text of the screen there is a white passage in which Yiepipipi comes up with a solution. 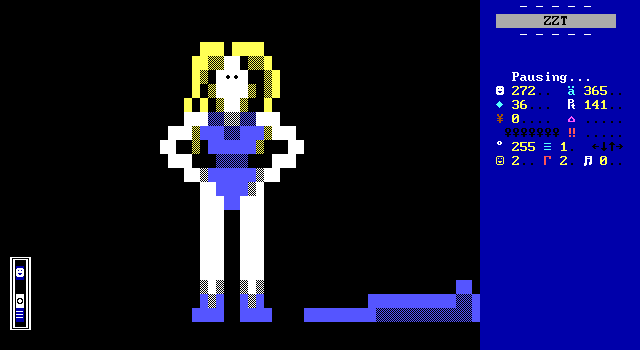 The passage leads to an unexpected series of art boards, beginning with Yiepipipi removing some excess clothing and striking a pose. She looks a little like Samus Aran in the original Metroid here. 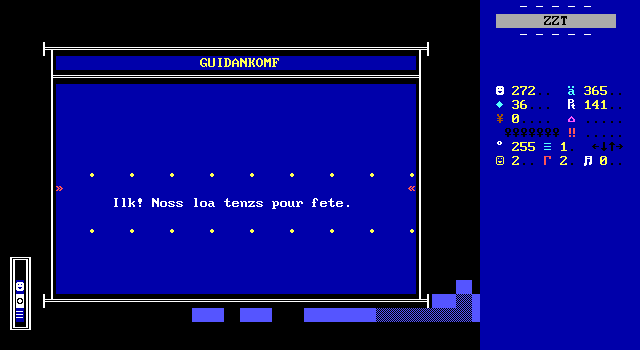 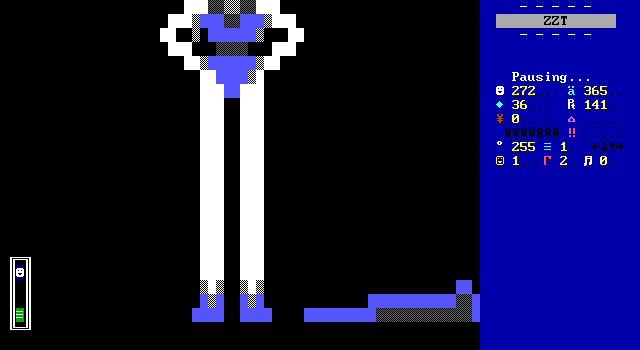 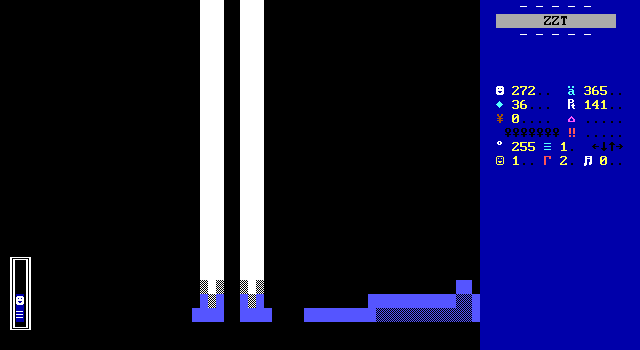 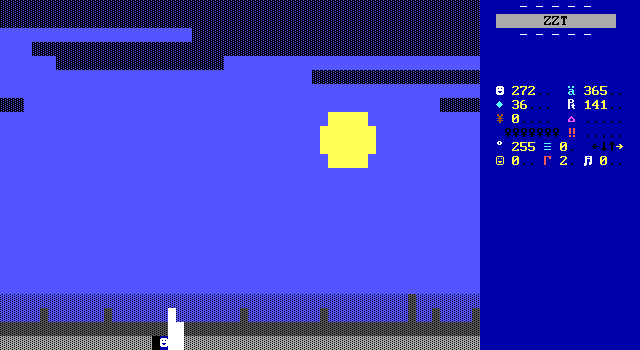 Faced with no alternative, Yiepipipi grows! She grows so tall that she can simply step right over the wall, which is done back in gameplay with the player, now meant to represent a giant woman that's able to just walk up and over. 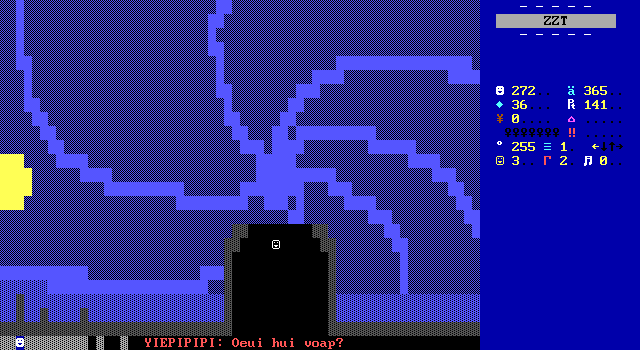 We return to voap. There's some large mountain or something and a swirling vortex in the sky and I have no idea what any of it means. 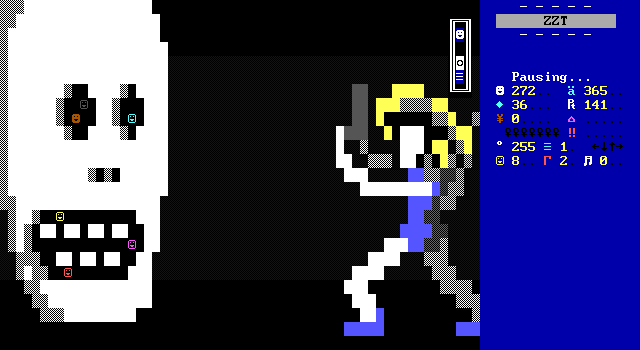 I particularly like this board because it looks like what you'd see in an old MS-DOS shareware catalog. Just add a title and a little list saying things like "20 CHALLENGING LEVELS. PULSE POUNDING SOUNDBLASTER AUDIO. REGISTER AND GET A HINTBOOK AND CHEAT CODES."

In the context of Yiepipipi, after growing to step over a wall, I guess a giant skull with dancing smiley faces inside of it just doesn't surprise me as much as it would have earlier.

Take note as well that we see Yiepipipi holding a gun here. The general vibe of this game to me wasn't that it was a particularly violent one, and I wasn't seeing ZZT's bullets as actual bullets, but I guess they were.

I can't believe I transcribed a scroll in this article.

The skeleton "Esklello" which I think is just Yiepipipian for the noun skeleton and not a name isn't much of a talker, but Yiepipipi demonstrates a greater understanding of what all this means than the player can deduce. Oryan is mentioned. Perhaps the faces floating around are meant to be those captured by the skeleton? 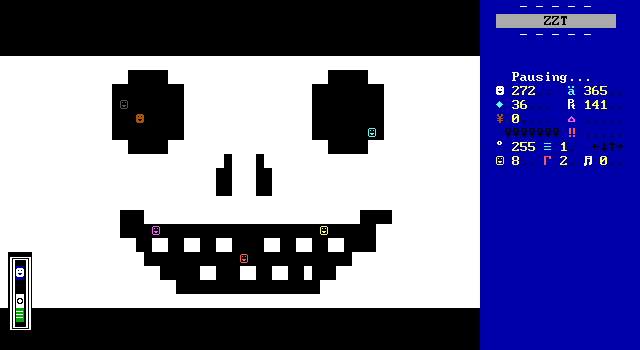 The camera zooms in on the skeleton's face. The brown smiley in one of the eyes does match the graphic used in the flashback for Oryan so I definitely feel like these are captured persons in some manner. 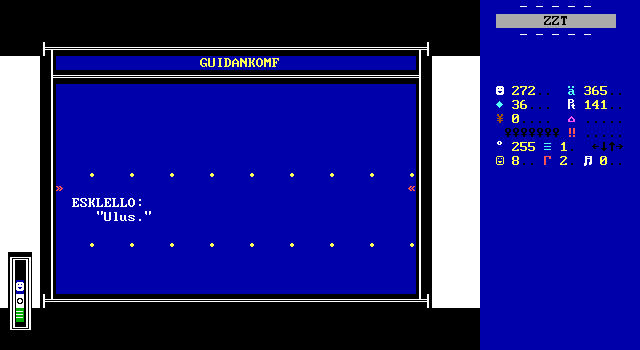 This is all the skeleton seems to say, and Yiepipipi is not having it. 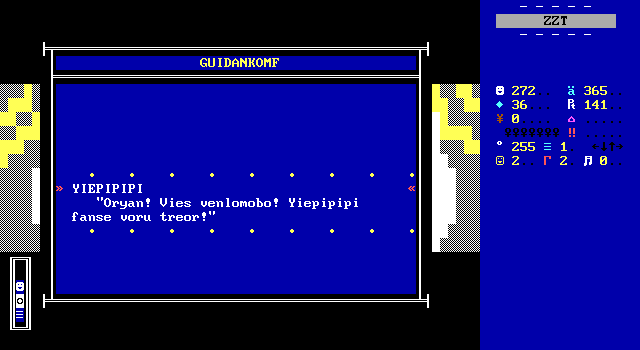 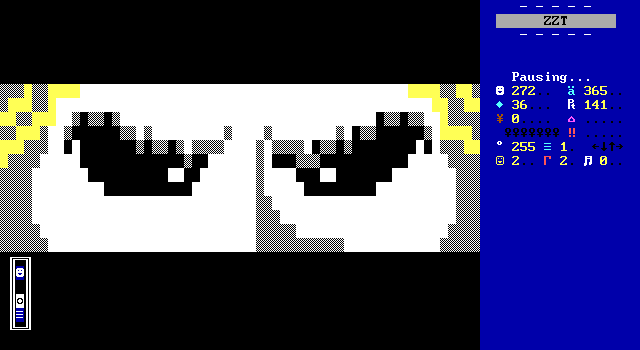 She announces her intent to save Oryan and the battle commences. After a nice closeup of her own eyes.

This sort of "camera work" in these scenes is very un-ZZT. It feels very thoughtful and gives a strong sense of drama to what's unfolding to make up for the lack of reading comprehension. I'm so used to ZZT scenes between the hero and villain just being an animated scene of moving smiley faces yelling or perhaps static art but merely of the two in a room. These closeups feel less like the usual "what would this scene look like" and opt for the far more impressive "how can I convey a feeling". It's straight up camerawork in a game engine without a camera, with closeup and cuts between boards enhancing things quite a bit.

In the case of Yiepipipi this is needed to elevate the game into telling a story versus the easy approach of just writing some gibberish and being deliberately obtuse. I don't feel like you can outright translate the game's language, yet it's very clear that there is an actual story being told. 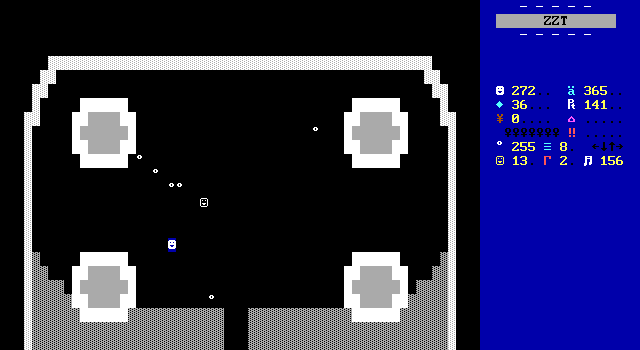 The skeleton moves fast and aggressively. As a boss fight, this doesn't do anything to unique and is probably the game's weakest component.

If you've been following these articles for awhile then "the boss fights aren't jaw-dropping" should be expected. It's basically my go-to thing to pick on when I need to not solely give a game praise. 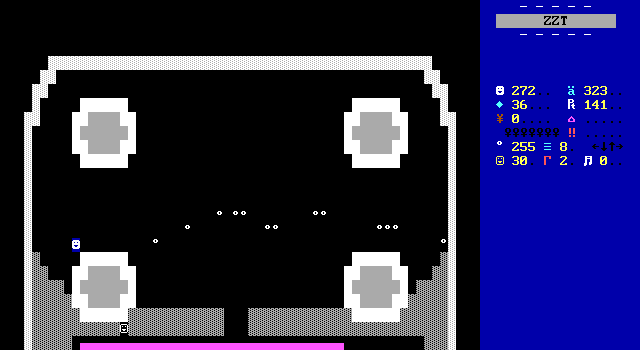 Continuing the trend of feeling a little different from most ZZT games, the boss's health bar is represented with half blocks. I've seen messages used to indicate health a million times, but this more slender looking meter is unique especially in that it compensates for messages being centered by padding the lost health with spaces so the meter is always aligned in the same way regardless of remaining health. 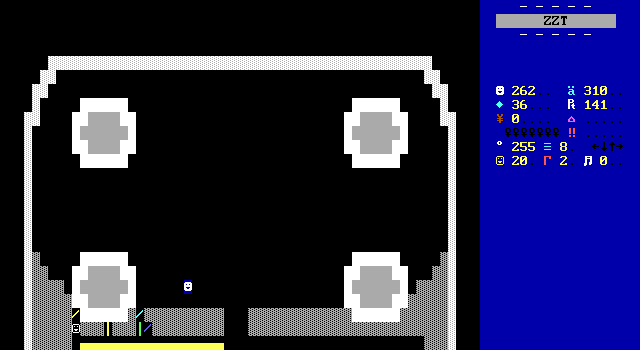 Beyond a certain point, the skeleton gets a bit more defensive, throwing numerous stars after each hit. Enough cover is provided in the four corners for Yiepipipi to be able to keep her distance and let them burn out.

You can also get away with just being really aggressive. The skeleton is coded to step backwards a bit after each hit before strafing sideways which prevents spamming bullets, but once the stars come out, there's a good chance of a star preventing the skeleton from taking any steps backwards at which point you can just hold down fire and win, but that's unsporting. 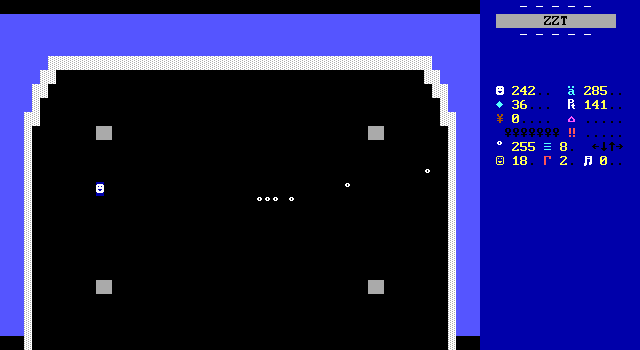 Finally the villain is defeated. The dark sky becomes blue once more, and the various protrusions atop the hill disappear leaving a few sets of passages to be used as an exit. 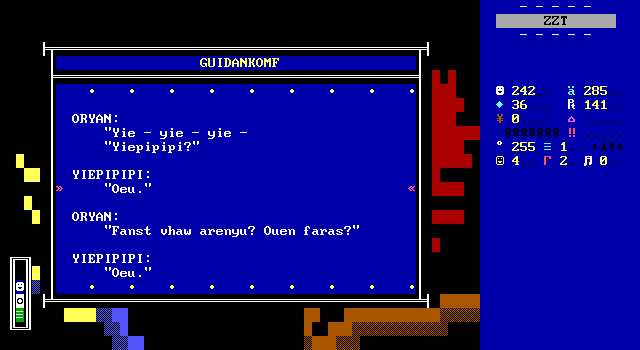 Oryan is saved, and surprised to find that it was Yiepipipi who defeated the skeleton. I do like the contrast here between the skeleton constantly responding to Yiepipipi with "Ulus", and her own constant response to Oryan's questions of "Oeu". 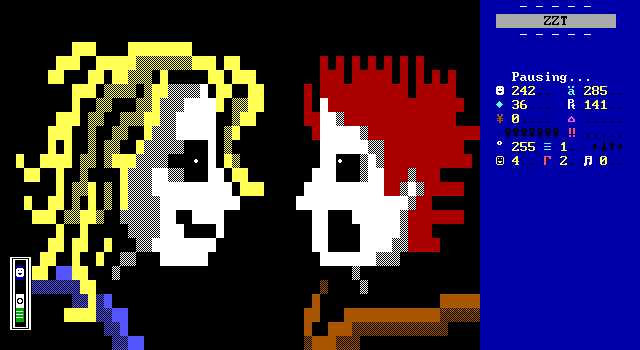 The art is as expected, wonderfully detailed despite being composed of nothing but basic walls. The shading done by changing texture rather than color in Yiepipipi's hair and the skin tones has been used throughout the art boards in this game, but really looks great here. 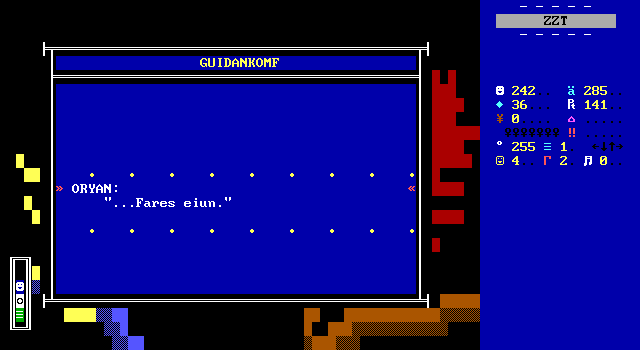 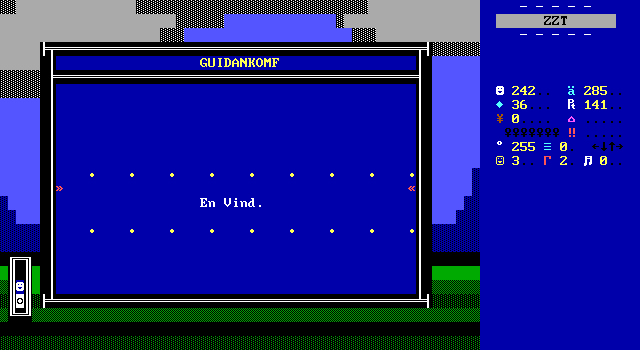 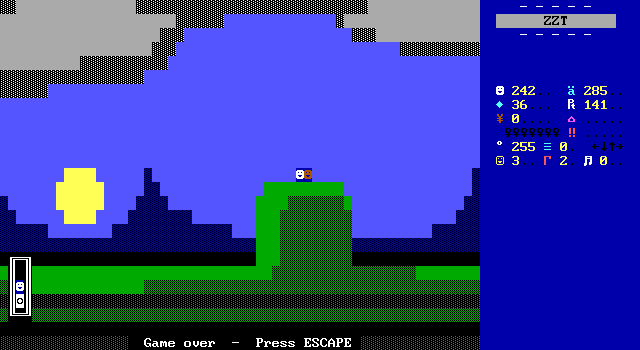 And so the story ends with Oryan and Yiepipipi reunited, and a return to more cheerful weather.

Yiepipipi is a game whose goal is to tell a story, with the challenge of doing so without having the luxury of words. It's not a game without language. The text is structured in a way that certainly feels real, and I think that offers a very different tone than the earlier mentioned silence of Winter.

QR Leon is able to impress here by rising up to that challenge and understanding the benefits of a medium like ZZT (really gaming in general) to tell a story. Clearly if this was a book it would be gibberish, but what I'm talking about here is the ability to encourage the player's curiosity. Everything in the game feels just a little bit fantastic, as if you're part of a folk tale from a culture that you have no background on. There's a sense as you move through it that things will become clearer despite the fact that after playing through the whole thing, I can't claim with 100% confidence to know a single word of its language.

Yiepipipi's language, without being something to comprehend, in turn becomes a way to figure out more universal human emotions and experiences. From Yiepipipi's surprise as she looks out the window to her flashback to Oryan whom she loves, the game's emotions are clear even if the language is not. The use of a fictional language allows you to recognize these feelings as something innate. Yiepipipi could have been a story of any culture, where a woman rescues her love from the forces of evil. That's a pretty simple story to write in any language, but if this game were in Dutch, German, Korean, or anything else, it wouldn't feel as special. Sure the text would be just as inscrutable in any non-English language to me, but I would know there's an answer if the language was a spoken one.

Yiepipipi not being bound to any specific culture, and playing with these shared themes of love and heroism, allows it to feel like it could have come from anywhere, and without a true answer for "where" it originates, it gets to be a game that feels like a strange glimpse into somewhere else, whose woods are more important than its trees.