The mystery of why this game gets little recognition within ZZT's Revenge has been solved: It's kind of bad. 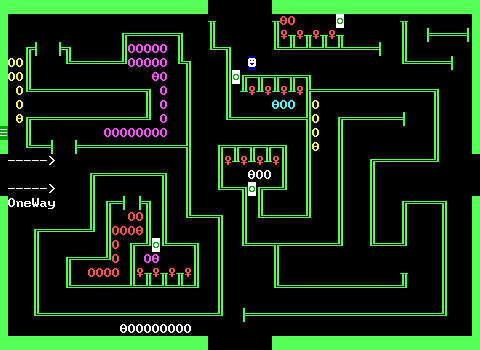 An official world that's part of "ZZT's Revenge", a collection of worlds that were considered winners for Epic's original ZZT contest. ZZT's Revenge has a lot of early classics like Ezanya and Smiley Guy. Manor (as it's more commonly called) doesn't really get a lot of attention.

As it turns out, this is because Manor is a nightmare of game design. This game relies heavily on unfun puzzles and collecting massive amounts of keys. (At one point in the video I decide to skip collecting nearly a dozen green keys one by one and returning them to a different board.) On the surface, Manor looks like a basic early ZZT game with lots of lions and ruffians to shoot and some early visual motifs like massive furniture in buildings labeled with text. In practice, it very quickly becomes more frustrating than fun.

By the end of this playthrough I just give up entirely and cheat constantly.