Exploring several demos for games that were never finished 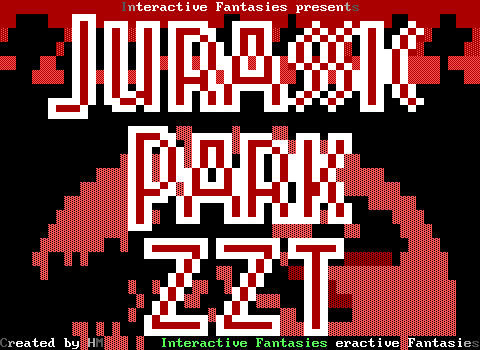 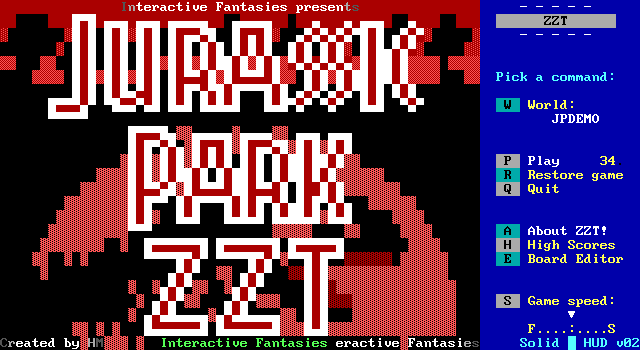 Now we're talking! HM's title screen for Jurassic Park ZZT sells me on the concept immediately. It looks stylish before you even begin, and has the Interactive Fantasies label on it, a straightforward mark of quality. Ironically, EvilMario has a few (demos) published under IF as well, though not his Zelda game.

A big budget Hollywood film needs some matching ZZT production values to hold up. This is a very easy ZZT adaption to ruin by merely calling lions raptors and tigers dilophosaurs. HM earns my trust right away with the beautiful conversion of the iconic T-Rex skeleton logo appearing so readable in ZZT (and without any objects for half-blocks). A conversion of the theme to PC speaker holds up reasonably well and I'm excited to hit "P" on this one.

(The video came out oddly scratchy on this one, you might want to just listen to the title screen music via the online version of the game)

Welcome to my somewhat-playable JP demo.
Firstly, thank you for downloading and
such. Hope you have a nice time looking
through this demo. Anyway, as I was
saying, this demo is somewhat playable.
There are 2 arcade parts in it (one
sidescroller, one topdown) and 3 regular
boards for your viewing pleasure. I do
realise that it isn't a very big demo, but
I do want *some* parts in the final game
to be suprising =) All these board may be
subject to change, so the final board
could be different. I don't think so
though. Anyway, have a nice time and
please send me feedback on this.

This demo has a bit more care put into it. HM acknowledges that he's still putting out a game here and structures a few key scenes for the player to be enticed by. This is a proper package unto itself and not just the first ten boards of the game and an abrupt stop when the content runs dry. 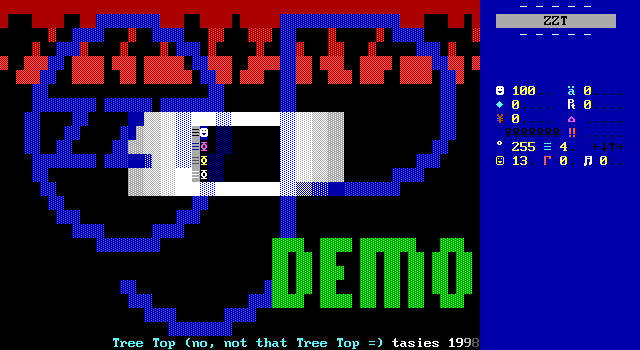 This menu looks great, integrating the style from the title screen into the background with a really cool way to present the text. HM wasn't exactly a big name among ZZTers, but looking at his releases, it seems like his output while limited, was decent enough. Without getting into any of the content of JPZZT yet, it's far more likely that this one got abandoned because of being too grand an idea for ZZT than the author getting bored and moving on to something else.

As for the meaning of "No, not that Tree Top =)", I... have no confident answers. The apple juice brand? The adventure park? 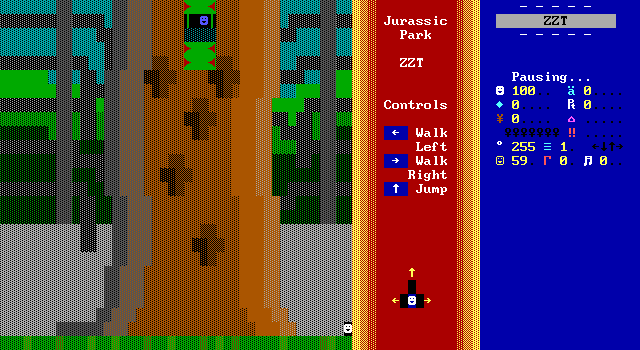 Being familiar with the source material (well okay, the source source is a book and not the film) makes this easy to appreiciate. As soon as you enter the board it's clear what scene this is and what the goal will be.

Grant: "Just give me your hand."

Grant: "I won't tell anyone you threw up."

Grant: "Just give me your hand."

Grant: "Stand on the door."

Grant: "One thing about climbing:" 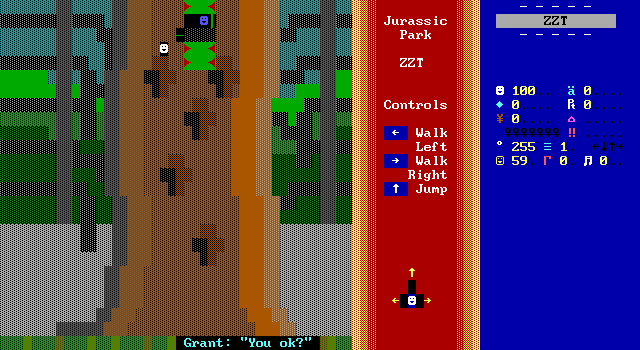 Now I'm not such a huge fan of the film to say if this dialog is one-to-one, but it definitely gets it right enough that it feels correct. Grant climbs up the tree to rescue Timmy easily enough, but not long after getting him out of the jeep the engine-aspect of this board kicks in and the player has to safely descend from the tree before the jeep falls and crushes you or Grant suffers from a fall that's too high to survive.

The engine itself is very well done. The jeep falls rapidly and has been constructed properly in ZZT so that it can move as a large object without breaking into pieces as it steps south on the board.

The controls are clear and visible even during the opening cutscene which gives the player time to process them without pausing just as the action is about to start to explain how to play. This is as much of a boon as a drawback though, as it's very likely you'll be focused on reading text on the bottom before realizing that the player now has control. HM is also a bit vague as to who you're controlling. Grant and Tim both need to make it to the bottom safely, and Tim will do so automatically, but without any time to figure out the details of the sidescroller engine, you can definitely mix up which of the two characters you're meant to be controlling. Grant is definitely the more likely, but pressing right and watching Grant respond and Timmy also move as part of his script puts in a bit of doubt in a fast-paced sequence. 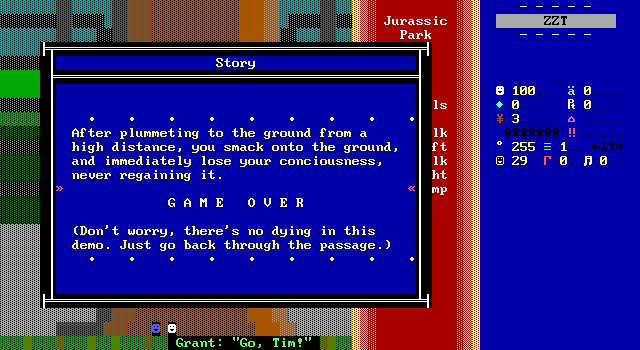 Still! Even if you're killed, HM wants this to be a showcase and the player is free to explore the rest of the demo. 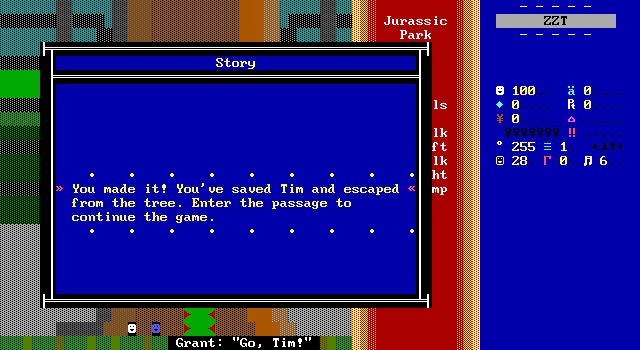 Going back and trying it again (because I must) and it's definitely easier when you know who you're controlling and just how little time you have.This blend of cinematic into engine on the same board is pretty unusual and I think HM was on to something here. The actual descent takes seconds, but it feels frantic and works in the game's favor. 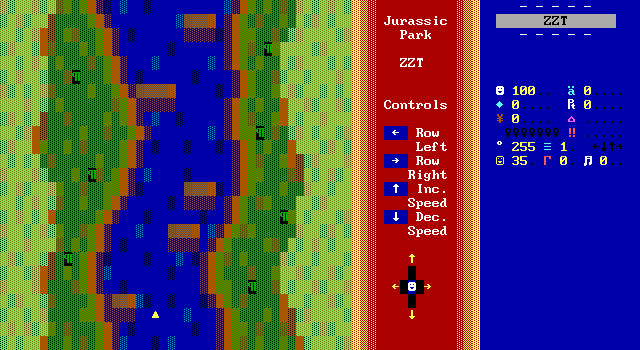 The second arcade sequence is navigating the Dilophosaur river, dodging projectile spit and trying not to capsize your boat in the process.

This one offers more room for error, as the first time the boat is hit there's a message about a near miss. 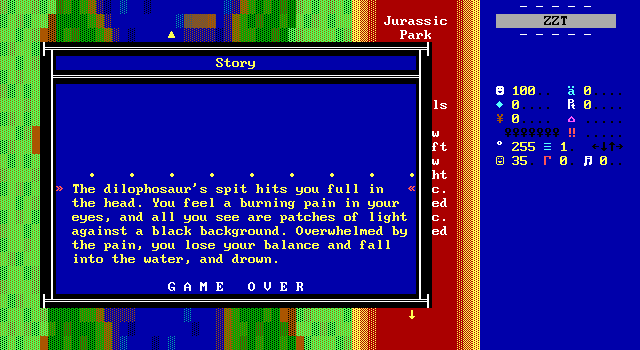 The second shot is fatal, resulting in a very gruesome demise. Again, HM doesn't kill the player and they're free to return to the main menu. 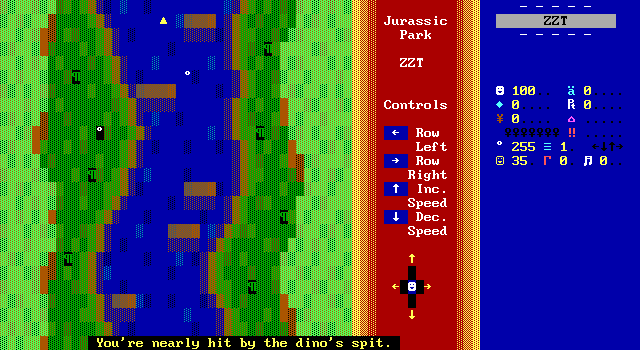 Of the two engines, the river rafting is the weaker sequence, but it's not bad. Like the previous engine it is very fast paced, partially owed to ZZT's limited vertical resolution of 25 tiles. This might have worked better if it was structured horizontally instead, allowing for a less crowded environment.

The big problem however is the responsiveness of everything. The speed is handled by adjusting the cycle at which the boat operates, which means that speeding up has some latency before the boat finally acts when it's told to move faster. This can cause problems with dodging logs in the river as the boat's slower speed also applies to how long between rowing left or right and actually having the object move. Basically, not moving at the maximum speed (which itself is still a fairly slow cycle three) is a mistake. 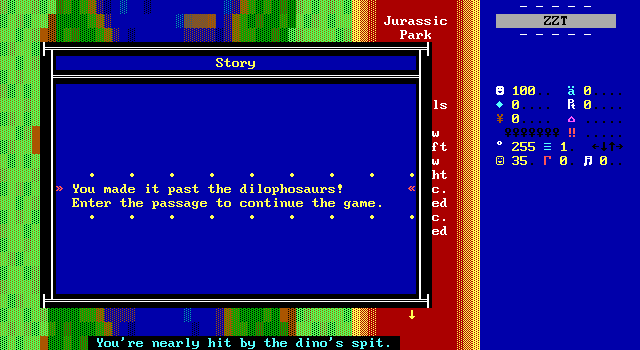 One thing this engine does make me wonder is what exactly the story for this game is. As a direct conversion of the film, this isn't really a scene, and the closest thing to it would be Dennis Nedry attempting to get to the dock during the storm (warning: 27 year old movie spoilers ahead) only to be killed by a dilophosaur.

This could very well be a scene of Nedry escaping only to have the very next board of the full game be him meeting his demise, but then that cheapens the need for his survival on this board. Of course, this could be a film-inspired game, something Interactive Fantasies members were constantly making in this era, with their unique ZZT games based on Indiana Jones, King's Quest, and Quest for Glory. 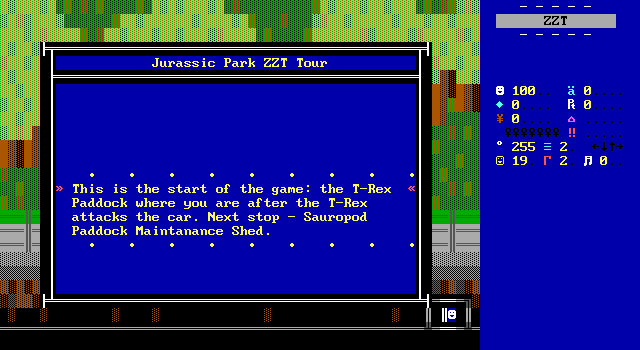 Those two boards make up all the gameplay available in the demo, but there are a few boards the player gets to take a tour of as well.

It sounds like Jurassic Park ZZT tries to get right into it if there are dinosaur attacks happening right at the start. It's shameful to imagine this game wouldn't have included the "six-foot turkey" speech. 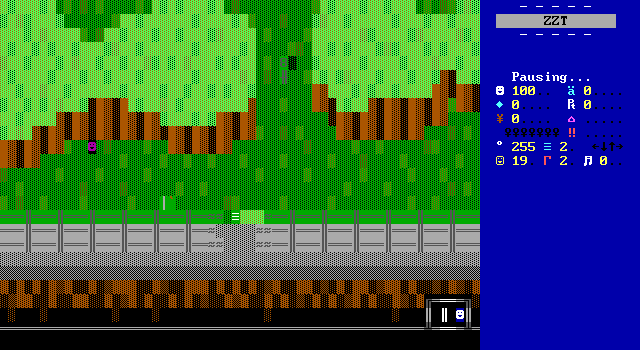 And it looks pretty good! The fencing especially is top-notch. If you're familiar with the movie and you're shown this board from Jurassic Park ZZT, you'll immediately know what you're seeing here. 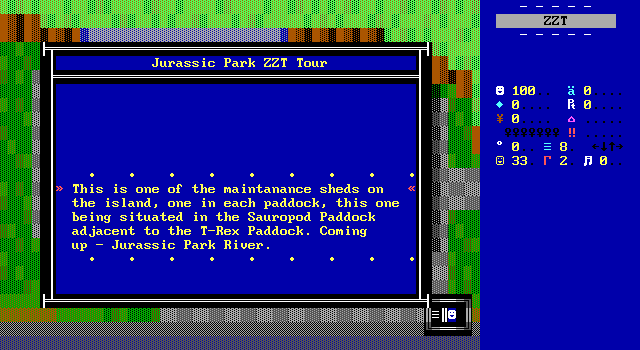 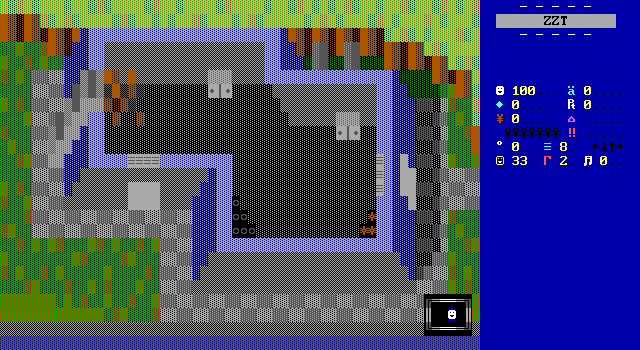 "Sauropod paddock maintenance shed" isn't as obvious a connection to Jurassic Park to make from this ZZT board, but HM is still making some nice boards. There's a very good use of space here, creating something a lot more visually appearing than a perfectly aligned rectangular building. Even with the more creative geometry and diagonal angles, the interior still looks very friendly for the player to navigate. This is the finest maintenance shed I've ever seen, and it stands in sharp contrast with the building interiors seen earlier in Zelda. It really shows off the benefits of having some background for an area that doesn't take up the entire board. 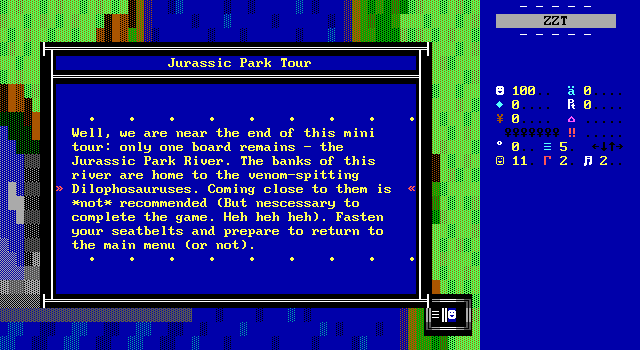 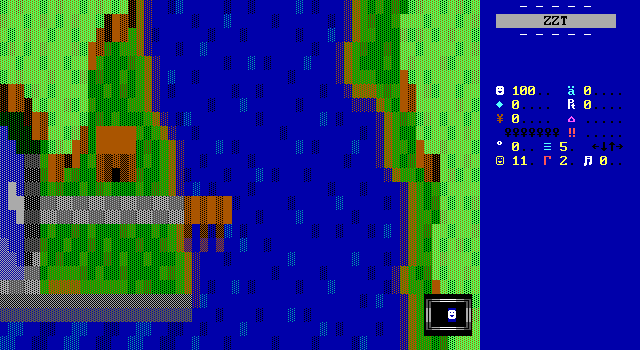 Lastly the tour concludes with a shot of the river. I can't believe a shed is the star of the tour overall, and this board still looks nice, but it doesn't feel as impressive to me. Overall though, this brief tour has enough style to it on average that I definitely would like to explore the island the game takes place on. 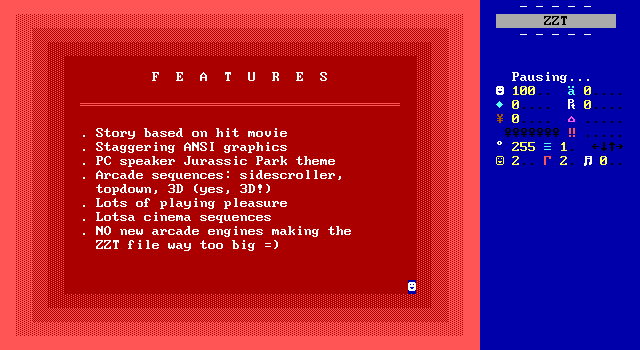 The final remaining area of the demo is this list of features. ZZTers loved to make jokes about ZZT's limited graphics and sounds in these things.

That first bullet point is just vague enough that I'm still unsure what the deal is with the boating sequence in relation to the story adaptation.

It also hints at an unseen "3D" arcade sequence. I can basically guarantee you that it would be something along JMStuckman's Maze 3D, which is to say, a cute idea whose "3D" portion is best off ignored entirely. I can definitely see it fitting into Jurassic Park ZZT with something like navigating underground tunnels and avoiding raptors.

As the world lets the player pick which part of the game to visit in any order, this board has a passage back to the menu and no proper ending either, leaving the player to manually quit the game.

Both Zelda and Jurassic Park benefit from the player having a way to know what to expect from the beginning. HM does a far more admirable job promoting his game. Land of Gannon feels very minimally like a Zelda game which is partially the nature of ZZT's limitations, but also it just lacks personality to it. HM is able to show off some fun little engines and some aesthetically pleasing boards. He's able to better understand what ZZT will let him do and properly holds back on promising too much. Despite both engines being fairly basic, they're fun and brief. I would trust HM to hit the film's plot points as needed and create a fulfilling experience in the full game.

After playing this one, I'm disappointed that the full game was never released. HM has my interest here. Playing this demo gets me imagining other moments from the film and how they could be handled in ZZT. I want to play in some engine where you have to stop moving at key moments to not be seen by a T-Rex's motion-based vision (well, in the fiction at least). I want to watch Muldoon being surrounded by raptors, scene ending with a "Clever girl." and fade to black. There's enough here that I have faith that you could very well make an entertaining ZZT Jurassic Park game, and HM's showing here, while brief, is enough to give me confidence that he was capable of making it.

The Jurassic Park ZZT demo also takes a better approach to how it presents what's there to the player. The courtesy of non-fatal failures make it a safe look at challenges the player will have to face "for real" in the full game. The gorgeous menu demonstrates that HM saw this demo as something worth attention and care as much as a full game. This doesn't feel like some lost world (pun not intended) or an incomplete game uploaded to the Museum, but a proper experience that absolutely accomplishes its goal of getting the player interested in the full release.