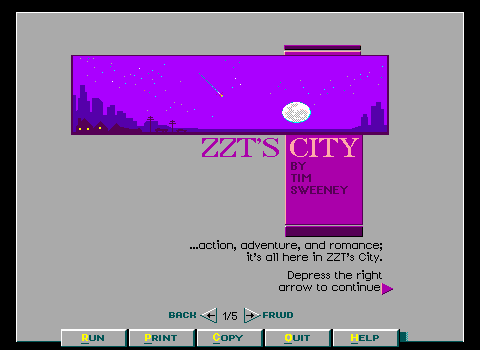 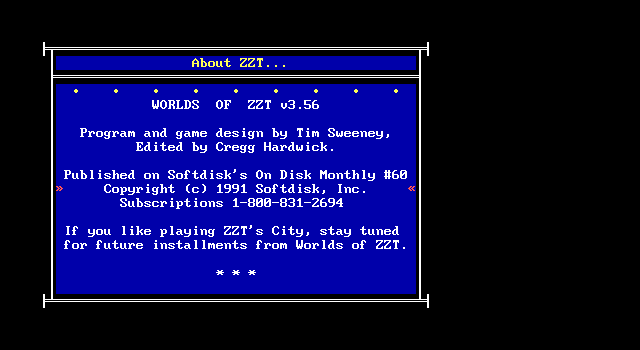 September has made for quite the exciting month thanks to an unexpected and quite remarkable discovery by Asie of a previously unknown alternate version of ZZT!

As it turns out, Tim Sweeney made a deal with Softdisk, a company that would put out monthly floppies containing games, tools, and whatever else they could cram on there to release a copy of ZZT through the service. Fast-forward to 2016 when Dosnostalgic uploads the disk to archive.org and nobody notices because nobody's looking.

Instead, the preserved disk sits quietly waiting for a good three years before Asie finds it and brings it to the attention of everybody on the Museum of ZZT Discord server. As is frequently the case when you find something nearly 30 years old and devoid of context, more questions about ZZT's earliest days are raised than answered. There's a lot to try and figure out, and plenty of old assumptions are thrown into question. 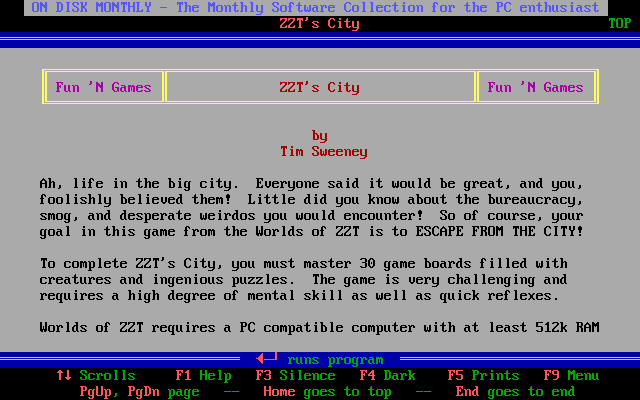 The "On Disk Monthly" disk is a small catalog of programs and articles with "ZZT's City" listed as the sole item under the "Fun 'N Games" category. In addition to playing directly from the disk, there are options to copy the program as well as read about it which brings up this blurb. First and foremost it's called ZZT's City rather than "The City of ZZT" (as all other releases refer to it) or "Underground City of ZZT" (as the world menu entry calls it). 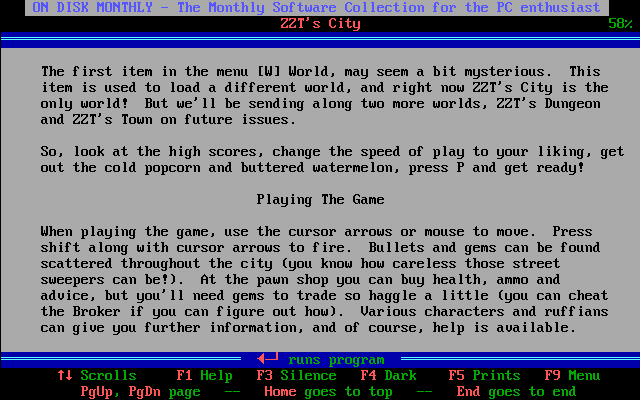 There's an explanation of ZZT's ability to load different worlds, with an explanation that right now ZZT's City is the only one. This... may have mistakenly been interpreted at first as if City was made before the other worlds when we were shortly under the impression that might be an earlier version of ZZT than previously known. The plans to distribute Town and Dungeons more likely just mean this one got chosen as the introduction. It doesn't look as if there were any more ZZT releases through Softdisk so ZZT's City is all we have. 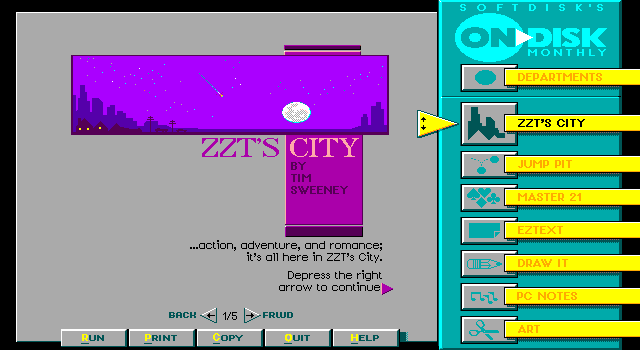 The catalog also contains a slideshow mock-up that's wonderful to look at. ZZT managed to be put on disk just in time for Softdisk to want to show a preview of their new graphical layout. Users on the Worlds of ZZT Discord said it looks very Sim City, and I definitely agree with that. ZZT worlds rarely get any promotional material that isn't in the ZZT format. This starry city is both not the least bit representative of the game, but also looks so good. I want to play games that capture the aesthetic in that picture. 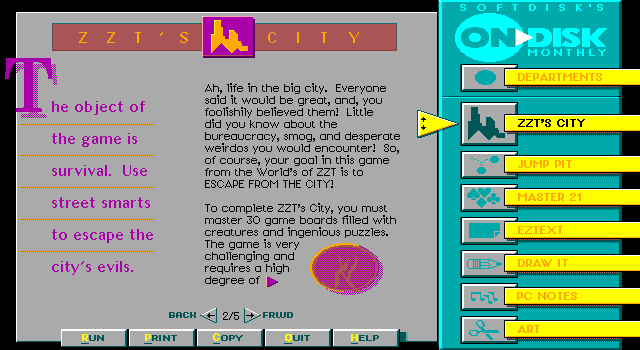 The text for this slide is copied from the main catalog's blurb, and features some more great aesthetic. I had hoped for more slides, but as it's just a preview, we're rather lucky that ZZT's City was what got selected for it to begin with.

If you launch ZZT from the catalog, you get this splash screen. I wish every ZZT world had an intro screen like this!

(They also got Sweeney's name wrong, which is a pretty common mistake in credits of ZZT worlds honestly.) 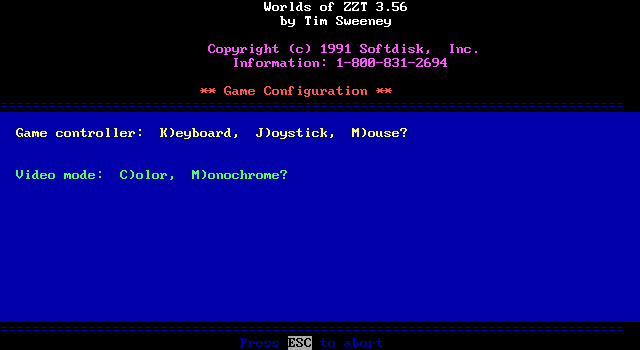 So let's start off with ZZT Worlds of ZZT 3.56. Well, let's see, first off it's called Worlds of ZZT which is incredibly validating to see how on-brand the Twitter bot's name is..

Then there's the version number and where this actually fits into the timeline of known ZZT releases. The original assumption at first glance was that this was going to be the earliest known release of ZZT, predating even 2.00. This was based on the fact that the world menu says Underground City of ZZT in all versions, and this one doesn't, which would imply a name change during development. It doesn't take too long into actually playing around with Worlds of ZZT to realize that we weren't that lucky.

(If you play from an unmodified copy of the ODM disk, there's already a ZZT.CFG file so this screen is skipped. Remove the config file (or run ZZT.EXE /c) and the configuration screen appears.)

After setting our options, a ZZT.CFG file is written using the same format as the one recently discovered in ZZT 3.0 earlier this year. ZZT v3.1 abandons the config file entirely, and it's brought back in simplified form in v3.2.

We also get the name "Cregg Hardwick", which gives us a lead into possibly solving some of the mysteries here. 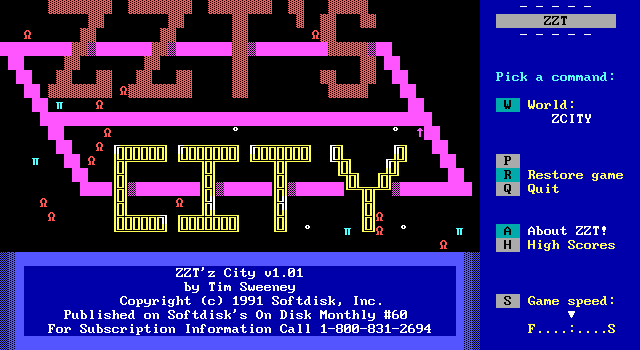 Then we get the default and only included ZZT world: ZZT's City. There's still a bit more to note here if you'll turn your attention to the sidebar. Firstly the world is "ZCITY" and not "CITY". Then the text for "Play" is missing in this screenshot, but it's not actually missing, instead it's blinking! This change draws your attention to the play button and makes it stand out. (This also happens with the "Pausing..." text during gameplay.)

I like the blinking text, and it would have been nice to have it in later versions, but it's also only half-implemented here. Anything that causes the sidebar to refresh like closing a prompt or adjusting the game speed will return the text to its standard non-blinking form. 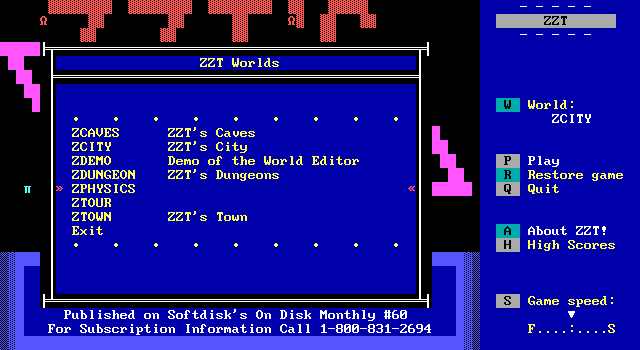 Of course the changed filename means that one of the first things checked were the other hard coded world names. The core series of Town, Caves, Dungeons, and City are all represented here under the "ZZT's X" naming convention. Oddly, Tour which shows various boards from the rest of the series is wiped out despite appearing in ZZT 2.0. (And, for completion's sake, all other versions describe Demo with "Demo of the ZZT World Editor".)

Physics is also missing, and the only evidence of its existence remains its entry of "The Physics Behind ZZT" in ZZT 2.0.

Decompressing the executable makes it easy to find all these text strings together, so we can safely say this is all of them. 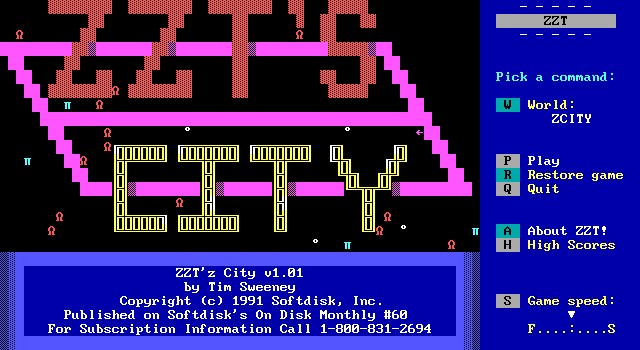 One disappointment is that Worlds of ZZT has no editing functionality. Although it's possible to hide the editor in 3.2 by adding an asterisk before the default world to load in ZZT.CFG, the editor isn't merely hidden, but appears to be wiped out entirely. The size of the executable is significantly smaller than any other release. (One advantage is that this version does have more free memory for larger worlds.) My hope of finding a version of ZZT's editor that makes blinking white on dark blue water like used in Demo continues to elude me.

So what version is it? We can say with almost complete certainty that it's a variant on ZZT 3.0. The evidence is as follows:

It has a ZZT 3.0 style interface - ZZT 2.0's game configuration screen is entirely black and white. 3.0/3.1 use brown whereas Worlds of ZZT is using black and blue.

It requires ?+DEBUG before entering cheats - ZZT 3.2 removes the need for debug mode, and beginning with ZZT 3.1 the status bar will display free memory with debug mode enabled. Worlds of ZZT does neither.

Asie, GreaseMonkey, and Lancer-X helped hunt down anything unique to this version of the executable they could find, and... didn't really come up with anything else save for one exception: The ?ammo cheat gives 15 ammo instead of 5. That's all we got. (I, meanwhile, was lamenting having a day job and counting down every minute until I could look around myself.) So if you were expecting anything groundbreaking, I'm afraid you're going to leave disappointed, but hey, we still need to actually see how ZZT's City differs from City of ZZT.