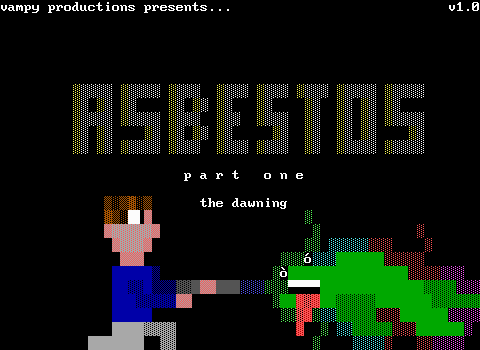 Just 1. On the board [phrance] East 1, in the triangular object, change #setlevel1 to #set lever2.

Enjoy the cool title screen. You wake up after a dream telling you to go to the surface.

Home planet:
Take the glass shard by the window, and get the key and box (200 health) in thecloset. Go left. Go to the green circle (robot) and replace the broken crystalwith the glass shard. Put your key in the keyhole and look at the terminal. Themap and the employee control sections aren't important, but the sectorinformation gives you your computer password. Go back right. Mess around withthe computer if you want, but you need to use the alarm set-off (proggies). Thislets you get the rope on this screen. Get it, and go back left. The guard hasbeen called to the alarm, so tie the rope to the robot and send it over thejump. You can now cross the rope bridge, clear the corpse out of the way and getthe keycard. Go back right. The keycard opens both doors, but the way up isblocked, so go into the south passage. Go left. Talk to the guy surrounded withblood to get a (necessary) hint. Snake is afraid of mustardized plants. Get theblood-covered squeeky toy. Go right. Talk to the psycho by the remote and hetakes your squeeze toy and leaves. Get the remote and go to the dispenser. Getthe eggs and mustard and go left. Mustardize the one living plant and talk toSnake. He runs away, breaks down two doors, grabs a set of bungee supplies andjumps. Since he broke down the bungee supply door, get some supplies and followhim down. The lower window will break. Go through the transporters and examinethe bomb. Reno appears and says that the bomb will explode when someone touchesit (FF7, anyone?) and that it will take out the suport pillar. Save and enterthe escape hatch in the hallway.

Reno directs to to the cave of surface-dwellers (the thing that looks like apillar). Enter. Talk to Lombard and he reveals some of the twisted plot ofAsbestos. Snag the gem and the box for 75 MP. The gem allows you to grow tolevel 0 (?) and learn Cure. You'll have to get the rest of the gems from thefollowing planets:

You have to head to Shadow when you have all the other gems. You can thendestroy Chaos. Go through the passage and go to Sledgehammer.

Sledgehammer:
Enter the settlement and talk to the first red guy you see, then the green guy.He reveals the situation on Sledgehammer and gives you a green key. Go north.Enter the larger building. Don't be daunted by the first door; it's unlocked. Get the fleck of metal. Talk to the green guy and give him the fleck. He givesyou a metal slab. Press the button in the hamster room and hurl the slab at thewheel. It melts into a spoon. Spoon out some radioactive goo from the barrel andhold it up to the smoke detector. Get the yellow key. Open the yellow door andtake the radiation suit. Put the suit over the guard's head and grab thesecurity pass. Go back outside. Enter the smaller building. Insert 'your' cardinto the slot and press the big red button. Go back outside. Enter the largerbuilding again. Enter the greeen passage. Talk to the ZZTers for a laugh, thenenter the grey passage. Get the Fire Gem to grow to level 1 and learn Fire! Getthe two boxes for 3 ethers and 150 HP. Go north. Save and talk to Lord Snee tofight him.

Raison:
Enter the building. Look at the sign and Leera will ask you to stop the Shinrafrom killing the Giphs. Go back outside. Go north. Enter Shina Inc. Talk to thesecretary to open the doors. Get the rope and press the red button. Open the boxfor 200 HP. Attach the rope to the wheel and attach the other end to thespinning robo-arm. Get the key-card by the sub and insert it in the slot. Getthe white key and place it in a door-like thingie. Get the hammer. Hammer in thepeg. Open the box for 20 MP and get the white key. Insert the white key in theother door-like thingie. Get the sub key and use it to unlock the sub hatch(dur). Enter the sub. Touch the door twice to open it. Touch the panel threetimes to open the lockers. Get the boxes for 300 HP, 100 MP and 2 ethers. Openthe locker and get the wire clippers. Press the green button and clip theexposed wire. Crank the crank, take the scuba gear and exit via the hatch. Talkto the giph and it gives you the water gem, allowing you to grow to level 2 andlearn Water! Save and go into the green passage to fight the master giph.
Master Giph:
HP: 40
Attacks/damage:
Master Giph casts PSY WAVE (10)
Master Giph spits acid (15)
Master Giph casts PSY STORM (20)
Master Giph casts OMEGA BEAM (300!)
If he casts Omega Beam, just do yourself a favour and restore. Use water as muchas you can, because he's got a lot of HP, and if he casts Omega Beam you'reprobably finished. After you run out of MP, save and swipe. If you miss, reload.
Talk to the giph. The answers to his questions are:

If you get them all on the first try, he gives you 10 ethers! Enter CabanaWorld.

This guy has low HP, but some quite damaging attacks. Just cast Wind on himtwice and Water on him once and he'll drop. Get the police badge and enter thegreen passage. Talk to the cop and enter the passage. Enter the blue passage.Enter Phrance.

Phrance:
Enter the cave. Get 150 HP and 5 ethers from the boxes. Talk to the blue guy toget a red key. Exit the cave. Go north. Get 50 MP from the box and press thebutton. Here are the answers:

Good day.
How are you?
Judgement Day
Lucrecia

Get the blue key. Go east, south twice and west. Go down the staircase and pullthe lever. Go back up. Go through the lower transporter and go north. Get thewhite key and the box for 50 MP. Go south back through the transporter, west andnorth. Unlock both doors and go north. Open the red door, and get the brass key.Go east and take the rolled-up gopher. Go back west and south twice. Insert thebrass key into the keyhole. Go east, use the higher transporter and go east andgive the guy his gopher for a laser pointer. Go north, west and west again, theneast (on the hill). Put the lazer in the hole of the monument. Go west, east(off the hill), east. Pull the lever on the monument. Go south, west and west.Enter the green passage. Talk to the raider. Save and enter the cyan passage.
Raider:
HP: 15
Attacks/damage:
Raider stares at you (15)
Raider vomits (20)
Raider spits at you (25)
Raider chews your hair (30)
You should have very high health, so just kill him with Water and save your MP.Snag the earth gem. It lets you grow to level 4 and learn Earth Slash! Enter theblue passage. Enter Shadow.

Shadow:
Open the door and enter the yellow passage. Get the Darkness Gem. It lets yougrow to level 5 and learn Comet! Get 500 HP, 50 MP, 5 ethers and Holy ph*ck fromthe box. Talk to the cyan guy. Save and enter the cyan passage.

Watch the cool cut scene. Save and enter the grey passage.

Chaos:
HP: 40
Attacks/damage:
Chaos drowns you in energy (35)
Chaos casts DESTROY (60)
Chaos casts ARMAGEDDON (80)
Chaos casts OMEGA (480)
Go all out. Do everything in your power to kill the bastard, but save often. Ifhe casts Omega, you're dead. Don't worry about conserving MP. Enjoy the cutscene, read the credits, and play part 2! Don't forget to check out the new,improved title screen!