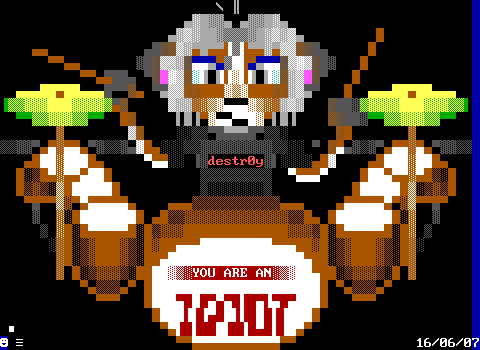 Of all the features of ZZT, none have gone less explored than that of its music system. For the most part, ZZT is incredibly approachable with children whose age can be counted on their fingers being capable of making games with it. The tools are all very simple and basic and lend themselves towards extremely rapid development.

Yet most ZZT games are silent other than the stock sound effects associated with various built-in. Most ZZTers have their comfort levels with composing sit somewhere around picking a handful of random notes to use as a sound effect when collecting something or opening a door. To produce a song in ZZT is quite the challenge that most were not up for even attempting.

Names like Alexis Janson, King Og, WiL, and MadTom some of the very limited few who could actually work with the system, and in my personal opinion, MadTom's compositions stand out far beyond the rest. MadTom was capable of more than 30 second loops for title screens, but rather multi-minute long tracks that make you forget that we're dealing with a single instrument. His own games are full of quality tracks, but it's the Frost games where he reaches his peak.

On modern machines that require DOSBox, ZZT music suffers greatly. Every little hiccup of the emulation distorts and stutters notes. You can appreciate the quality of the work, but you can't listen to it as intended. In writing the Closer Look article for Frost 2: Ice, (just over a year after the article for Frost 1; Power,) I decided I would try my hand at ripping the soundtracks for the games, the bulk of which goes unused.

I'm not an audio person, and it took quite awhile to get things right, but what's available here to listen to or download is a collection of 21 tracks of roughly 20 minutes of MadTom's work, captured via line out from a 2001-era PC that can run ZZT natively. I've done my best to capture this music at the best quality I could trying various methods of capture and reducing noise from electrical cables to bring this to you.

The music alone is worthwhile, but when combined with the beautiful cityscapes and character models Nadir produced for the series combine to make it one of the best examples of ZZT as a medium for art.