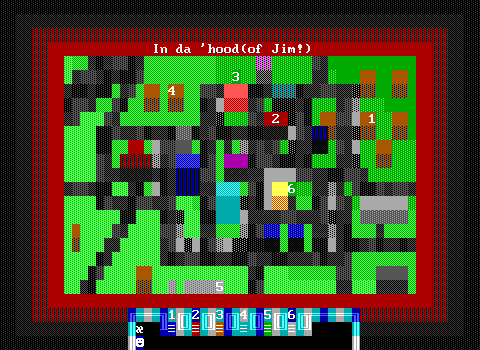 Odd that Hazard should win his second MTP on the anniversary of his first, but he has! With limited competition, chiefly comprising WiL's surreal work Inhabitant and Clecky's intriguingly entitled $$$Bin Laden'$ Big Muney Hustla$$$, with a title screen featuring an urbane Bin Laden commending the west side of Los Angeles, Hazard's brief comedic trip 33 More Ways to Die was judged the best game in this predictably slow month.

Evidently dissatisfied with his original 33 methods of suicide, Hazard has decided to implement 33 more in a Town of ZZT rip. Jim ... for thus is your enigmatic character named ... is hell-bent on getting to the party planned for him by his friend Bob. Yet for some bizzare reason Jim can only acquire access to said party through the acquisition of five purple keys, hidden in various places scattered around town.

However, pea-sized nuclear explosives, radioactive waste, mutant killer pigeons, and puddles on the bathroom floor don't tend to help in even the most mundane of quests. These life-threatening obstacles must be overcome through careful observation and self-restraint.

Navigation throughout the town, including Jim's house and the city park, is done through the use of a worldmap menu. The keys can be acquired simply by looking carefully around and touching everything in sight, avoiding anything that looks like it might kill you. Which is not to imply that it is possible to actually survive the game at all.

Thirty-Three More Ways to Die is not really much more than a short, amusing, violent ZZT game, but as far as that goes it is presented fairly well. The graphics are fine, the sounds are fine, and the writing is in places rather clever and definitely amusing enough to engage interest for at least a little while. There's a pretty good animation of part of the world being blown up when Jim makes a particularly severe mistake, which is pretty funny.

There's not really too much more to be said about that! Hazard's skills are evidently improving, but I admit I'd like to see him work on slightly more ambitious projects with real plots and storylines than this kind of thing, amusing as it may be. Thirty-Three More Ways to Die tries to be not much more than a short comedy game, and succeeds as just that.