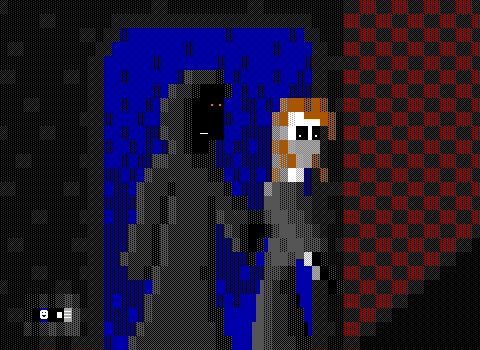 Evil Sorcerors' Party by John W. Wells and others

Once in a while, even in these years of dwindled interest in ZZT, someone releases a game which reminds us all just why we really love this old GCS. ESP, by John W. Wells (with some assistance in graphics from Zenith Nadir and Rob_P, and some other guy named Funk), is a much-anticipated collaborative project that has fortunately lived up to its hyped status rather well.

Welcome to Rederring City, which is to be the centre of the upcoming Presidential Election. There are only two candidates of any significance; one is a party led by a certain Reginald Brickles, an esteemed and honest politician with a commendable history in the political field ... and the other is led by Nyarlethole, an evil sorceror, whose primary tactic to get elected involves hypnotising the voters. And doing it so well, that Brickles' chances in the election don't really look so good ...

Enter John Cleatle, a middle-aged, over-indulgent, balding physicist who knocks Brickles out in the bathroom and steals his briefcase, and Cynthia Burns, part-time Sunday school teacher and professional sniper. To this unlikely pair is entrusted the seemingly insurmountable task of preventing Nyarlethole from winning the election; and along the way, they're going to make some very unnerving discoveries ...

At an orgasmic four files long, ESP is a game that you'll need to sit down and work at. But it's worth it. JohnWWells' storytelling ability is well above and beyond that of your average ZZT game-maker (though he has himself admitted to me that this isn't really saying all that much), and he develops the plot and the characters very, very well with his own brand of dapper humour. John Cleatle is one of the best characters I have ever seen in a ZZT game (I think a little less of Cynthia's character), and the story is told with an appropriate blend of careful attention to detail, intelligent and frequently very original puzzles and gameplay, and interjections of the author's own very dapper sense of humour.

Such a short review seldom does a game like this justice; for a more thorough analysis, I recommend Fishfood's painstaking Featured Game review of ESP.

I am usually extremely reluctant to hand out perfect scores, as they imply ... well ... perfection, which of course few games attain in my eyes. But taking ESP's virtues (fantastic gameplay, brilliant writing and characterisation, great variety of engines and programming tricks, reasonable music, and good jokes) in comparison to its few and far-between faults (minor inconsistency of graphic styles, some confusing and unnecessary writing, and a "what the fuck?" (although still brilliant) ending) ...

... for only the second time in more than three years, I think I'll make an exception. Well done, JWW (and Zenith Nadir, Rob_P, and whoever this 'Funk' person is)!