An Interview With Jim Crawford - Frog Fractions 2 and ZZT 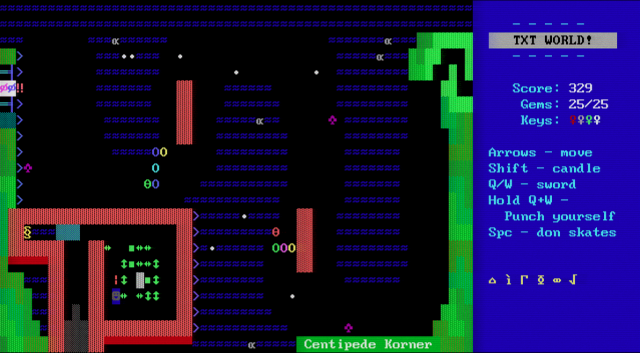 So I have to admit, whatever I was expecting Frog Fractions 2 to be, it was certainly not a text game that looks and feels like ZZT. The Worlds of ZZT twitter account had several people breaking the news to me, and it was a really cool surprise!

I shot a message to Jim Crawford's twitter to see if he'd be willing to talk about his history with ZZT and what got him to make it such a major component of Frog Fractions 2. He responded saying that he'd be happy to answer some questions. So I sent him a few, and got the following responses:

How did you first find ZZT? Are there any particular worlds you have strong memories of?

"When I was 12 or so my mom's boyfriend bought a CD-ROM drive and a 3 CD set called Shareware Bonanza, which was almost certainly the result of a process like telling an intern "download everything from every BBS until you have enough to fill up these 1.8 gigs." Chunks of content were tiny back then so this was a truly stupendous amount of stuff: games, music, scans of ladies from the Sports Illustrated swimsuit issue, audio files of movie one-liners. I spent a lot of time going through them, and they felt effectively infinite -- I would never, ever have enough time to play every game on those disks. Living in the content desert of the early 90s, it was a miraculous content oasis, a prelude to the content ocean that we're all drowning in now.

ZZT was one of those games. I remember thinking it looked like a ripoff of Kroz, but of course it turned out to be quite different. I loved exploring those worlds, and looking back on it, maybe I was taken with the abstractness of them, how you could convey a sense of place with a sketching comprised of a few glyphs. Later exploration-driven indie games like Seiklus and more recently Gebub's Adventure feel to me like ZZT did, but with graphics -- exploring a world where the art evoking the sense of place feels sketched in, rather than fully realized.

Another memory I have is coming across a ZZT developer group on Prodigy, without realizing what I'd hit on. I don't think I ever actually posted anything, but Alexis Janson was posting there, who made a lot of the ZZT games I later came to love, and also MegaZeux and specifically Weirdness -- a game that, looking back on it, hits a lot of the same notes that I was trying for with Frog Fractions."

What ZZT games did you make? Are any of them around still on zzt.org?

"I made a few ZZT games but I don't think I ever actually *released* any. When Frog Fractions was released I told people I'd been making games for twenty years, but that's overselling it -- what I'd mostly been making was game *engines*, and when it came to actually making the content, I would peter out and rarely actually release anything. It was only with the development of Frog Fractions 2 that I really forced myself to see if I could do for-real level design."

What inspired you to put an homage to ZZT in Frog Fractions 2?

"I made Frog Fractions for my friends, so when 10000 people played it on day one, I was pretty shocked. I wasn't part of the indie scene at the time; Frog Fractions was very much "outsider art." And I love outsider art! But six months after its release, I was friends with tons of indie devs, and very much an insider. I used that a ton, in leveraging talent to help make the game better, and help make the ARG better, but it also made me wonder about whether I was capable of making something so weird and obscure any more.

Whether or not it was actually necessary, I ended up compensating by making my references even more obscure, including ZZT, Insanity and Nethack, three old games that I discovered on those CD-ROMs that are almost unknown to modern audiences. Obscure allusions are a double edged sword; they're more powerful for people who get them, but for people who don't, they just seem like nonsense. In which case the trick is to make the nonsense itself worth seeing, in the case of a game like this one, making it funny or fun. I hope I succeeded!

After making FF1, I saw a lot of people have fun with the text adventure part and realize that was a kind of game they could enjoy playing. I kept that in mind deliberately for FF2, including a list of game recommendations for people who 100% the game. I don't know how many people who love FF2 will love ZZT as well, but anyone interested in spending that much time in TXT World probably at least ought to give it a shot."

Frog Fractions 2 can be purchased on Steam, under the title Glittermitten Grove

This interview is a part of the Worlds of ZZT project, committed to the preservation of ZZT and its history.
Support Worlds of ZZT on Patreon!
Article directory
Main page