You Vs. Stupidity 2 Walkthrough 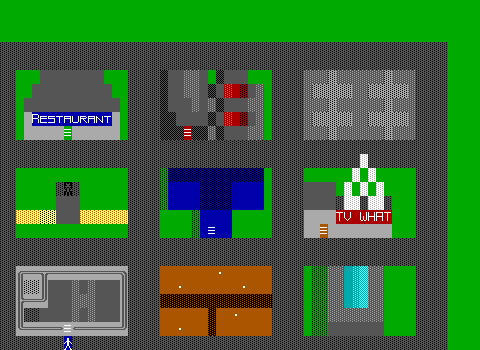 This walkthrough seems to be missing the last lousy five
points(tm). If you know how to get them, please e-mail me
at foxman111@hotmail.com. Thanks!

We’ll investigate at the Tajha Mall at F4 first, so go
south and enter the grey passage. You might want to come
back here later - they sell armor which will prevent
100HP of damage, but you don’t have any money now. Go
north and talk to the Disney Burger clerk, then the blue
guy on the middle table.

Shoot the rampaging ginsu knives and talk to the quiz
machine. The answers are as follows:

Milton Bradley’s got a def one!
Mmm, my famous yankenbean soup!
(thok) No! Open the door and come in!
The BNR is coming! Load up the truck and get out of here!
Bear
One of the above, depends on whether you are Christian,
Jewish, atheist or Hindu.

Go east. I’ll give the co-ordinates of the yellow key and
turds in the format (spaces across, spaces down), where
the bottom left square in the square-shaped section of
the board is (1, 1).

If you shoot left from where you start, you can kill this
boss in one hit. The points and dollars are the same, so
go for it! Enter the red passage, then the blue passage.

The Terrifying Horror of Space Jam:

This boss walks around randomly, firing in all four
directions every so often. Sometimes he vanishes, then
reappears shooting. Just keep plugging away at him,
you’ll get him.

Take the southern path west and grab the white key. Go
east and take the northern path west, open the door and
enter the grey passage, then the red passage.

Get the heart and go west.

Rotate the cannon three times and fire it. Set everything
up as shown below:

Rotate the gun twice and shoot. Enter the grey passage.

This guy basically moves a little, then shoots like
crazy. He dies in ten hits, but each time you hit him, he
throws two stars then turns them into sharks, effectively
acting as mines. With one hit to go, he’l go berserk and
run at you. Shoot him and get the key. Enter the grey
passage and go east twice.

Grab the bottom rock and use it to cut holes in the tree.
Get the rope at the top and make a rope bridge with the
two other rocks. Go east.

Ahh! Californian raisins! You can either take these guys
on yourself or radio in for backup. I recommend doing it
yourself - the backup basically sprays the entire screen
with bullets, so you’ll lose a lot of health. The small
raisins take four hits each and the big one takes ten.
Take out the big one and the little ones die too, but
take out all the little ones first and the big one can’t
die.

Get the purple key, go south and get the clay. Go north
then west twice. Unlock both doors and enter the grey
passage.

First, take out the things on the bottom. The things on
the sides will start throwing stars, so shoot them. Shoot
the green thing before it makes too many lasers. Here,
DON’T SHOOT ALL THE RAISINS! If you do, The boss goes
berserk and charges at you FAR too fast for you to shoot
it. Just shoot the green thing and you’ll be fine. When
it’s dead, enter the red passage.

Enter the red passage, then the grey passage. Heroin, eh?
Let’s investigate. Go west, south and enter the brown
passage. Talk to the clerk and ask him what he saw. Enter
the brown passage, go east and walk to the house in the
middle of the bottom row. Go east. Try to open the box
and key in the wrong password. Run away. Try again with
the right password. Get the invisibility belt.There are
three ways of doing this:

Enter via the back door. Open the Nestle Tragic until you
reach the atomic bomb. Go east. Go to the wrapping paper
and package the bomb. Go east again, try to take the
clock and pick any of the non-clock-smashing answers.
Stamp and label the bomb with the stationery and Elvis
stamps. Go east twice and enter the brown passage. Go
west. Tell the mailbox its shoes are untied and shove in
the mailbomb. Enter the blue passage.

Enter via the back door. Open the Nestle Tragic until you
can’t open it any more. Go east and wait for the blue guy
to leave. Go east and stamp the bomb parts. Get the clock
and pick any non-clock-smashing answer. Switch the pistol
clip with a piece of the bomb. Go west twice. Smash the
pepper and grab the salt. Check the fridge and open the
can of fibre on the table. Add fibre to the soup. Wait
for the green guy to leave and come back, then go west
twice. Wait for the blue guy to leave and replace the
target with another piece of the bomb. Wait for the blue
guy to leave, then go east twice. Read the book on the
right and wait until they come out of the painting. Read
the book on the right. Run over and switch the face with
the last part of the bomb. Go south.

End of split in walkthrough. Watch the scene and enter
the red passage, then the blue passage.

Take the western path north. Try to disarm the bomb and
scratch the paint off the wires, then cut the red wire.
Go south and talk to the guy for pakrat-away. Woohoo!
Enter the grey passage.

The Saga of Lloyd:

To build a thermonuke, gather the following:

Take the beacon and wire it to the clay. Take the alarm
clock and smack it on the clay. Now, wrap the whole thing
into the gym sock. There’s your thermonuke. Happy?

The quick brown fox jumped over the lazy dog and ran into
the woods.

Touch the item tallyer and pick ‘IT’S OPERATION
TIME!!!!!’. Follow the instructions on the paper I just
translated for you. In case you were wondering, if you
didn’t have all the items that weren’t directly used in
the making of the nuke, and if you didn’t save Lloyd,
then some or all of the items would have been destroyed.
Enter the red passage, then the grey passage.

HAHAHAHAHAHAHA!!!!! EAT THERMONUCLEAR WARHEAD, BOUNCER
SCUM!!!!! Ahem. Destroy the bouncer and enter the grey
passage. Throw Manhattan if you want. Stand next to the
health pump and your health will go up incredibly fast.
Most importantly, talk to the guy who looks like
AKNeutron for the cheese shaped like a duck(tm). Enter
the grey passage, then the brown passage.

Go north. Oh, goody! Another boulder puzzle to draw a
diagram for! Woohoo!

Yes, there are more boulders in that diagram than you
have access to. Miss out the boulder nearest to the
boulder the bullet will hit first for now. Rotate the gun
twice and shoot. As soon as the bullet first ricochets,
quickly move the boulder it just hit to the place where
the boulder you omitted should go. If you don’t get hit
by the bullet, it should hit the target. Enter the blue
passage.

Save here, like the scroll says. Set the fans as shown in
the diagram:

Push the bullet right. Talk to AKE and give him your
cheese is the shape of a duck. Plasma launcher? I’m
guessing that’s good. Ask him for a hint for the route
through the minefield. Enter the green passage, and it’s
time to brave the 3D maze again. Once more unto the
breach, dear friends, once more!

Go through the platform game, touching the arrows to
reverse gravity. There’s no real trick to it, it’s easy,
and writing a walkthrough for it would just waste
everyone’s time. When you reach the end of the cliff on
the east side of the screen, go east (the blocker should
have turned into a fake - if it hasn’t, move further east
in the side-scroller). Go towards the portal. You’ll be
transported somewhere that looks oddly familiar...

Go east and talk to the Plagiar. Enter the purple
passage. Open the cage door, hit the switch and enter the
brown passage. Do you remember the Californian raisins
you fought en route to defeat stale TV specials? You
could have called this guy as backup. He’ll bounce around
the screen, spraying bullets everywhere. Shoot him
quickly, but he’ll kill himself in the end. Enter the
blue passage.

Shoot the leftmost and rightmost sections of his nose
that you can get to through his teeth. He’ll set red
things on you and his teeth will vanish. Bloody the rest
of his nose and knock out what’s left of his teeth. A
white bridge should extent from his nose. Cross it and
enter the nose.

Shoot the centre of the brain three times in quick
succession. Brace yourself for a veritable forest of
stars. Cower in fear until its life guage empties. Enter
the grey passage, then the blue passage.

If you pick ‘Yes’ and have 300 points, you get access to
an arena mini-game. Congratulations! You just beat You
vs. Stupidity 2!