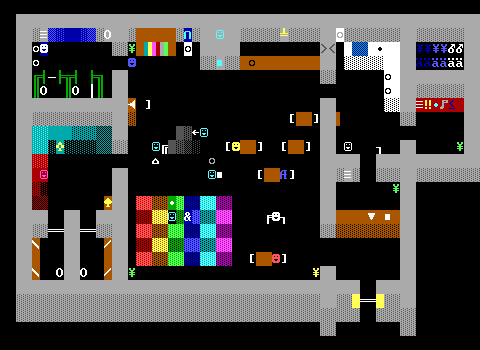 In $Board 4, edit timer 2 (hidden in the bottom-left hand corner). Change score
to gems in each case.

Board 1:
Look around, learn the layout and enter the passage on the disco floor.

Board 2:
Talk to gchucky. Check the inbox. Get a frog-catching net from the cupboard.
Read "The Disgusting Recipe Book". Wait until a frog is by the entrance of the
cage and then net it. Take a frying pan from the drawer, put it on the burner
and cook the frog. Get the oven mitt from the cupboard and take the pan and
frog. Get the bread from the cupboard and you have a frog sandwich! Talk to Monk
twice and ask for a lemon. Get the Styrofoam cup from the cupboard and fill it
in the water cooler to get lemonade! Store both the sandwich and the lemonade in
the fridge. Check the to-do list. Read "Repairing and Restructuring Toilets".
Open up the stall and open up the toilet. Get a stalk from the bamboo plant. Get
the marijuana plant. Water the plant with the bathroom sink and put it in the
light from the lamp. Talk to drac0 twice. Try to take the glue and offer him the
joint. Go to the toilet, insert the bamboo reed and glue up the crack. You've
just fixed the toilet! Check the inbox. Show Atom the letter. Check the
emergency exit and ask Knightt about the guy who ran away. Show him the letter.
Talk to gchucky. Exit #Darkdigital.

Board 3:
Talk to gchucky. Read all three books. Talk to Dexter and open the dra.wer for
tongs. Fish the CD out of the urinal with the tongs. Activate the intercom and
shut off the cell intercom. Insert the Hanson CD into the CD player. Get the
fly-paper from the drawer. Toss it in the cage. When the frog becomes trapped,
get it. Flush the frog down the toilet. Talk to Knightt. He suddenly feels the
urge to be cooperative... >:-D! Talk to gchucky. Ask ChanOP about Lemmer. Open
up the fridge and examine lemmer. Talk to gchucky. Exit #Darkdigital via the
emergency exit.

Board 4:
Talk to gchucky. Talk to the president. Get the pot from the drawer. Fill it
with water from the sink. Put the pot on the burner to get boiling water. Pour
boiling water on Lemmer and pull off a limb. Dip lemmer's arm in the painter's
can of white paint. Replace Marvin's damaged arm with lemmer's arm. Get the
loose wire and plug it into the back of Marvin. Using the power control,
activate the wire. Get the mug from the drawer. Fill it with ale at the
dispenser and give it to the workman. You'll get a hammer. Break open the
cupboard and get the cup. Dip the cup in the waxer's wax. Put the mold under the
lamp to dry. Attach it to Marvin's arm. Talk to the president. Go to ChanOP and
plug the new interface in. Talk to the president. Talk to the electrician. Get
some stalks from the bamboo plant. Get the spork from the drawer. Get some
residue from the toilet. Bamboo the bare wires and glue the timer panel shut.
Talk to the electrician. Talk to Eddie. Talk to crankgod for a crank. Get some
al from the dispenser. Gouge out lemmer's eye with the spork. Put the crank, ale
and eye in the waxing machine. Talk to Eddie and exit #Darkdigital (the front
exit). Enjoy the cinema!

Board 5:
Talk to gchucky. Talk to marvin. Shove him upwards into the sink. Leave the
kitchen. Ask ChanOP to remove the masons. Rev up the waxing machine. Get some
metal from Marvin and cut the timer free. Flush the timer down the toilet. Enter
the passage.

Board 6: Talk to gchucky. Get some wires from Marvin. Plug them into the big red
box. Plug the other end into the power control. Throw the switch! Talk to
gchucky. Look at the waxing machine. Get the butcher knife from the cupboard.
Chop off a reed from the bamboo plant. Get the spoon from the drawer and gouge
out lemmer's other eye. Get the wax from cait sith's feet. Get the funnel from
the drawer. Go to the waxing machine and insert the reed, refill the wax and
insert the eye. Talk to gchucky. Get the squeegee from the cupboard. Wet it from
the sink. Squeegee all the wax. Try to squeegee the vomit. Get the baggie from
the cupboard. Squeegee the vomit into the baggie. Flush the vomit down the
toilet. Drag cait sith to the toilet and flush him down. Drag lemmer to the
toilet and flush him down. Talk to gchucky. Enter the red passage.

Board 8:
Enter the restroom and touch the mirror twice to smash it. Get a glass shard.
Open the janitor's room and get the bucket. Enter the command center. Enter the
prison. Turn on the stobe. Push the janitor from below. Get the broom. Stab the
guard with the glass shard. Search him for a security card. Use the guard's key
to open the 'no access' door. Fill the bucket from the sink. Throw the bucket of
water on the electronic lock. Smack the president with the broom. Search the
president for a keycard. Unlock the jail door and get the keycard. Talk to
Dexter and get the key. Unlock the president's filing cabinet to get a disk
marked "PURGE ALL!". Put it into the unused computer. Get the hammer. Enter
Cyrogenic Storage. Hammer Adam Weishaupt's case. Activate the nuke's timer. Talk
to Dexter. Exit the building. Enjoy the credits!