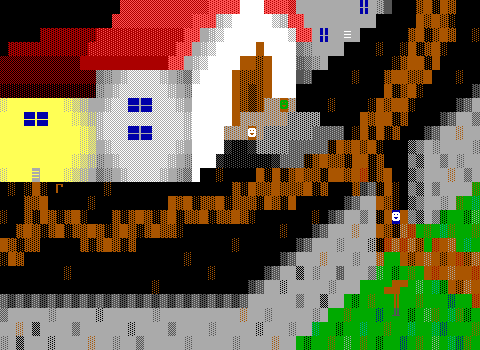 Walkthrough:
Make sure you read all the info! When you're done, select 'play the game'. Go
west and enter the purple building. Talk to the guild master and ask about
everything. Sign your name in the book. Leave. Go east twice. Kill the goblins
and go north. Climb the tree and get the ring. Enter the house. Give the healer
her ring. Leave and go north. Knock on the gate and enter the castle. Get the
tongs. Save and pay to fight the weapon master. Keep swinging and you should
win. Leave and go south twice then east. Free the fox with the tongs. Go east,
read the sign and talk to the guy. Go north then east, killing the enemies.
Enter the passage. The answers are Baba Yaga and Elsa von Spielburg. Enter the
house. Don't touch anything until you get upstairs. Talk to Erasmus. Agree to
the challenge and enter the passage. You're on you're own here, except for the
fact that to win you can zap through the fakes. Through some obscure bug though,
there is no step limit, which should help no end. Talk to Erasmus and he'll give
you the magic mirror. Go north and kill the goblins. Go north, kill the
monsters, get the coins and go north again. Go north, kill the dwellers and talk
to the guy. Go east. Here's the solution:

2,3,1,4,5. This provides a bridge. Go west and kill the dwellers. Go west and
get the coins. Knock on the door and buy the Chain of Agony. Fight the frost
giant and use the chain repeatedly. Get the gem and go east twice, west (the
lower way), south five times, west four times and enter the magic shop. Step on
the glowing space. Buy a Dispel potion. Leave and go east four times, north
three times then west. Talk to the troll and go west then north, killing the
brigands. Don't worry about the thief. Go west, kill the brigands and enter
Henry's cave. Save and win money from Henry. Leave. Go north and talk to
Bonehead. Use the Dispel potion on the frogs. Save and attack. Use Magic Mirror
only when Baba uses Wave (the green thing). Otherwise attack with the chain.
Have the soldier that can use magic do so all the time. Leave and go south then
west. Talk to the guys then go west. Talk to the guys and go south. Talk to the
centaur and go west. Kill the orcs and go south. Buy the Crossbow Valkyrie and
go east. Read the note and hide behind the bush. Go south and kill the enemies.
Go west and try to get past the barricade. Fight the brigands. Go east, north,
west then north. Enter the hole. Jump to the highest platform. Fall down to the
lower platform. Step on the depression and immediately jump. Go back left and
fall onto the lower platform (avoiding the spike pit). Go under the depression
in the ceiling and quickly go back. Hold down the right arrow key. When you
reach the far right hand side cut through the Mandrake root. Pull the lever and
enter the passage. Watch the cinema. Attack constantly with the crossbow to win.
Jump over the gap and quickly run right. Jump over the platforms and go right.
Play part 2! The password is HHASHCZEYXKZT. The answers to the questions are:

Open the door and try to pick the lock of the next. Save and enter the base.
Quickly block off the east and south doors with boulders. Go north. Enter the
passage after Yorick's speech. Save and use the magic mirror with You. If Yorick
casts sparkle, it'll reflect. Have Elsa kick. Enjoy the ending!