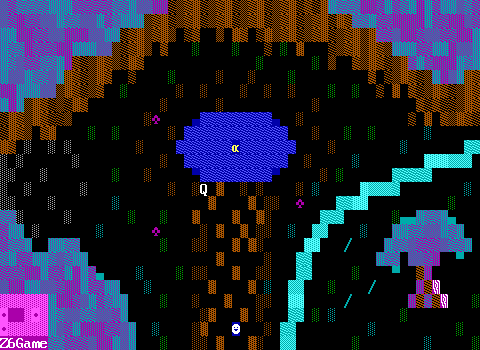 From the author her...uh, himself.

For his copy of PB, goto freeweb.com/p0pstarEntertainment/Bolette.zip
You will need ZZT to run it at zzt.the-underdogs.org if you happen to google this file up magically.

This walkthrough will help you with most difficult parts in PB without giving too much away, so it's more of a strategy guide then much of a walkthrough.
The game has two modes; normal, and +hyper mode. The hyper mode can be access if you load editor, and then the game file so you'll be on the starting board. Next you open up the debut by pressing [?] and type +hyper. Exit out and follow the title's instructions.

But before I start this walkthrough, here are some tips.

- always talk to people more then once.
- it pays to know who and where can you get your resources.
- trying any random thing could give you bonus points.
- reserve ammo, even if it means leaving extras behind.
- it's best to wait before going any further in some places.
- item swoop from backpack wisely.
- HYPER: speed is the key. if your mouse works, it will prove very useful.
- HYPER: touching features might reveal a challenge token. Remember you must put one token up to pick up another one.
- Just have fun. I know I have when I made this...kinda =/.

Talking to william in the beginning will help you a bit about learning the world's features, such as the backpack engine. When you jump down the hole, go down and you'll run into a bundle of torches. The enemies down here are the bigrats, so melee attack them by touching them. A example of getting bonus point, go where the exit is and go to the bottom left corner where a gem is trapped. Touch the wall on the left three time to free the gem and get bonus points.
In hyper mode, there's a Red Timer on the bottom left corner set to 20 sec. When it runs out, a crackle of thunder will sound and the bigrats will become HUGE and offer few points. There's a bonus here to. If you manage to fly through the tunnels and kill all the yellow rats, you'll get 20 gems, and points, and the rats stay small.

At this point, you should buy you some bombs, two is all you need for this game...I think, unless I miss something. The ArseDemon Cave is optional to go into, it's just that the two boards(the cave entrence and the interior) has bonuses. The woman under the tree wants you to kill the sharks which is no easy task and requires a lot of shells. To kill the sharks, you need a rifle cannon. Another bonus here is that you have a single boulder on the screen. What's it for? The tip is that the ArseDemon is very dangerous if a couple deside to exit the cave through it's entrance so...

Inside, there are a few arse biter, but still prove quite deathly. Gems littered the floor, and there's a box of torches, and a life up(resets your health to 200) on the lower right. In the hyper mode, a lot more arse biters are here...but the smaller, and rich with pts. You'll get bonus if you clear all yellow ones before time expires. - Two tokens are here.

Head for the thorny thickets(a token is here too) and into the cave to the right. Collect as many hearts as you can here while heading towards the top. You need them. Melees doesn't work with the cyan cats here so you need a gun. The cats are evil, you shot one or one dies, a larger version will materialize anywhere, or IN YOUR FACE. I hope you collected some hearts. Take a shortcut out of the cave though the tunnel on the upper left, and head down and break the breakable. HYPER: There's shilloads of arsedemons about and you sure as heck don't want to freak with the pussycats too. Getting a Silencer ready is the safest.

- two token are here...
- a purple key have sunkin into the marsh.

Just lovely...Oh, the game...uh...Okey, you could go down to the village but you'll find out that you'll will need a translater to understand the seeming inanimate mushroom objects. When you come back with one, find the one name Og. He's your source of free health and bullet, and hints.
The bonus lies in the problem they are having in the village.
More tips can be found from Hiru'Yaro's book which a former hunter is holding. That will be the guy in yellow to the right of the warp. Sometime, it won't work on your computer, XP user and such, so open the help file included in this game on a notepad. This has info and tips on how to defeat enemies.

Okey, now your choice now is to head for the foggy forest.

You'll need plenty of ammo to scrap with the foggs. They are immune to melees otherwise. There are two thick fog patches on top and bottom from the Biga$$ fogg's entrance that are hard to maneuvor through...if you don't have a compass that will reveal the path through it. You can find the compass at the very upper right of the rainy woods. Heat specs will reveal enemies location at all times, and works with both foggs and bratz.
The mermaid here will give you a translator if you talk to her the second time. HYPER: The kid has something purple and shiny that need loosening up from him.

The Fogg boss likes to lap up stuff and can be it's own undoing. If you get eaten, step back and shoot out the mouth. It'll vomit you back up. Get to the ! symbol to use one of your bombs, and set it at the opening of it's mouth. You'll love what will happen's next.

Your choices of places now is the Living Labrith, or Molten Degree.

Onless you want to die a crispy death, you should have rockice at hand. Just avoid the lavaworm, and head for the hotell. There, you'll see nicholas cage singing "My name is Jonas!!"...okey I'll stop. The guys on the floor that's flashing needs something from the snackbar so go to it and give it to him, her, or whatever. Another will flash, so repeat two more times. The last will give you a water disk. HYPER: Talk to Zeph for a boost. He has no life, and that's why he's here.

The trick with the items. Get the waterdisk first, and go to your backpack and ready your rockice, so you'll have one item. THEN help the salaman upstairs. You will have the grappling hook and rockice at hand. It's the best way to travel around MD.

Hiru'Yaro is a nice dragon and will give you the key freely. But your goal is to get his glasses. Careful not to end the conversation or you won't get it. Say that you want his glasses, and then insult him with "neuga please." and the fight comence. Hide behind rock when he throws stars, and time the hits when he gets close. Always keep moving. The easiest way to take him down is to use a gun(you're a lame bastard if you do).

Your goal here is to release the water by pushing the boulder over. But you'll need a device that pumps your arm up. If you listen to Og about where he lost his item, you'll know exactly where. To escape the labrith, shot the dead hyperpede on the board you've came in.

If your trip through molten degree was successful, then you have what you need to get the other purple key. I can tell you now that you'll need ammo for this trip. Get the waterdisk and move toward a mass of water to inter it. Blast anything that gets too close, expecially the ray runner which can and will end your game in a flash. To get the rifle cannon on the isle, you need a grappling hook to latch on a root.
Search the rising land paths to find the purple key.

You should have all four keys(or five in hyper mode) to return to consiousness at this point. If you don't then I suck at giving game hints, and need to go back yllimpse.

A Small Spoilers.
- get the key to the thickets and leave the gun there. Get enough gems to get a half armor, or keep rolling which ever suits you. Go where Hiru'Yaro lives and kick his aiyaz. You'll get HUGE POINTS for owning him without a weapon on.

Well, that's all I have for you so good luck, and have fun at ZZT.