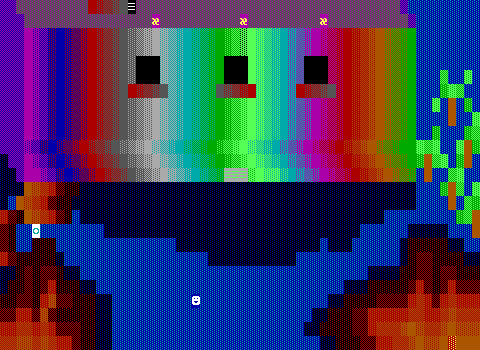 Enter the red passage. Go south twice. Talk to the guy. Go east and
go through a gap between the edge of the wall and the cliff. Touch
the blue object there for 9999 points. Go back and through another
gap - this time between rocks. Go north and grab the hammer. Go
south, west twice, north and enter the grey passage and go east. Talk
to the dying guy and go west, up the stairs, then finally enter the
black passage.

Talk to the guy and enter the purple passage. Go south and enter the
caves. Move the small boulder and go west. Talk to the guy three
times, and ask him about everything. Go south (the cyan guy there
isn’t important) and open the gate. Enter the green passage and get a
spork and a napkin from the drawer. Look at the bowl on the table.
Enter the green passage and go north, east, enter the black passage,
north, east and north. Spork the eye and pick it up. Go south, west,
south, enter the cave, west, south and finally east. Throw the eye
into the well. Now for another backtrack! Yay!

Go west, north, east, enter the black passage, north, east, north and
enter the grey passage, west and climb the rightmost vine to go
north. Cross the gap from there to the Burr-lynn wall with the rope.
Cross the rope. Take the moon. Climb the rope and go south, west,
enter the grey passage, south, east and north twice. Open the eastern
door with the moon and enter the cyan passage. Get the teddy with the
straw. Enter the cyan passage and go south twice, west, north, enter
the grey passage, east, north and cross the rope. Give the teddy to
the boy and go west. Watch the ending. Congratulations! You just
finished Edible Vomit!