Frodo's quest to get some rings and kill Smaug with the help of a piece of string. 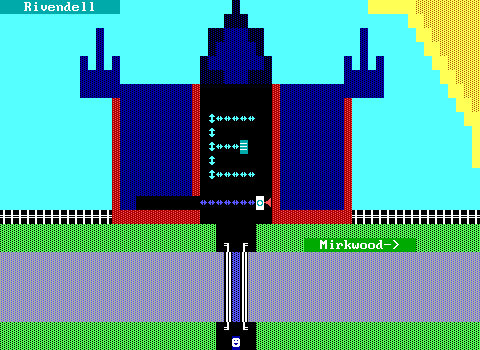 Livestream of the ZZT world "Middle Earth" by Kyle Perry (1999)

A pretty title screen lures the player in, promising hobbits and adventure. Early on the game is quirky and fun, full of interesting interpretations of places and characters from The Lord of the Rings series.

As the game progresses though, it seems to get more and more cruel to the player, requiring things like realizing a puzzle is unsolvable (probably) and that you're supposed to find some arbitrary fake walls to get around it. Wander around a maze of six boards, finally find what appears to be the end goal only to discover it's an instant game over.

Eventually I just ran out of places to go, carrying keys with no doors and being aware of doors whose keys I lacked.

There's a really good halfing joke in Rivendell though.