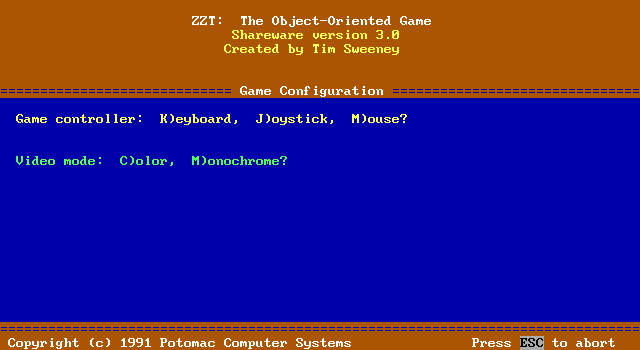 There are numerous versions of ZZT available consisting of several different versions frequently with shareware and registered variants. In addition there are also a few unofficial fan-made modified releases. If you're brand new to ZZT, the registered version of ZZT v3.2 (linked in an above image) is almost certainly what you're after. Version 3.2 is the final official release of ZZT and remains the definitive version to be used for running virtually every world. Unless a world's documentation states otherwise, you are safe to assume that 3.2 is the intended version.

In 1997 Tim Sweeney made the registered version of ZZT v3.2 and all official worlds available without registration or payment.

Two unofficial releases, Nanobot's CleanZZT and WiL's ZZT v4.1 essentially cover the few instances where ZZT v3.2 is not the intended version to use.

CleanZZT is a modified version of ZZT v3.2 which removes a few built-in sound effects and messages. It removes messages for touching water and stepping on a fake wall/forest for the first time as well as the sound effect for touching water. Many ZZT worlds use water for shading and fake walls for colored floors so removing the messages and sounds makes simply walking across a room or bumping what is meant to just be a regular wall not start talking about gameplay mechanics not actually being used nor play a sharp tone. There are no changes in compatibility and CleanZZT may be used as an alternative to ZZT v3.2 if you find the messages annoying. Some worlds such as Daedalus' Obelisk which heavily rely on water to block the player but not bullets highly suggest using this version.

ZZT v4.1 is a more in-depth modification of ZZT v3.2 which alters some of ZZT's limitations and games designed for its abilities will not be able to run properly on ZZT v3.2 or may even outright crash on it. Its main change is support for board sizes up to 64 KB from ZZT's more conservative ~20 KB. This allows for significantly more complex code to be written. ZZT v4.1 also fixes a bug where #put cannot place an element in the bottom row of the board. It removes a few default filenames preventing you from unintentionally working with files named SAVED.SAV, TEMP.BRD, and UNTITLED.ZZT which are very likely to accidentally be overwritten. Like CleanZZT, it removes (even more) default messages and sounds. It is worth noting that while the documentation claims to increase the board size limit and stat limit on each board that this is not the case. It is also important to note that though the board size memory is increased, the totally amount of memory available for the world is not. It must also have its executable decompressed before running it with Zeta.

ZZT and all its derivatives listed here are designed for MS-DOS and will not run on their own on modern systems. To get around this Asie has developed an x86 emulator designed specifically to support ZZT known as Zeta. This is the best way to run ZZT on non-vintage hardware. DOSBox may also be used an alternative (and was the only option in the past), though it generally performs worse than Zeta for running ZZT.

A full listing of ZZT versions available on the Museum can be found below. Outside of the three versions linked above in bright colors, they are generally a novelty at best and their use for actually playing/developing ZZT worlds today is discouraged. Despite this, there are currently no known compatibility issues between any official ZZT releases and a game created in v2.0 should still work fine in v3.2 and vice-versa.

Additional variations exist, though they're typically intended for just one world such as Banana Quest and RPG ZZT.